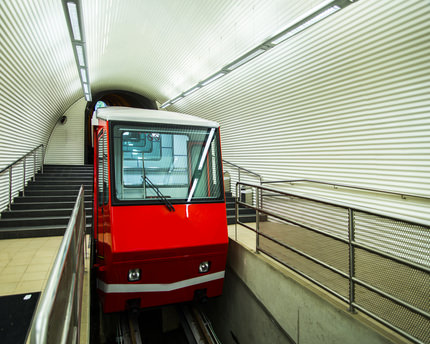 A funicular railway heading to Artxanda hill in Bilbao, Spain.

7 October 1915 was a day for celebration in Bilbao. At 12:20 PM local people, who had been escaping to nearby Mount Artxanda to relax and enjoy their leisure time since the nineteenth century, witnessed the first journey of the Artxanda funicular, connecting the town with the summit in under several minutes. According to newspaper accounts, 2,800 tickets were sold that day. The idea arose in 1901 inspired by the Igeldo funicular in San Sebastián, but it wasn’t until 1915 when the project of Evaristo San Martín y Garaz was approved by the Department of Public Works. 103 years later, the cheerful red wagons of the funicular continue to depart promptly every 15 minutes throughout the year, offering visitors the most spectacular views of Bilbao and the point at which the Nervión river meets the Cantabrian Sea.

Once it had been opened, the funicular immediately became very popular among the bourgeoisie of Bilbao, who went up Mount Artxanda not only to enjoy the nature and pure air, but to go to the casino that once stood at the top and the various txakolís—open-air eateries where the traditional wine of the same name was made—in the surrounding area. Today, users of this distinctive mode of transport—some 800,000 people in 2017—still use it for the same reasons. The casino may no longer exist (it was destroyed during the Civil War), but there is a park, a hotel, sports facilities and one of the best restaurants in Bilbao, Txakoli Simon, famous for its delicious grilled meat.

An eventful history that shows no sign of stopping

Ever since it was built in 1915 by the Swiss company Von Roll, a specialist in mountain trains that had also installed the Igeldo funicular and the Tibidabo funicular in Barcelona, the Artxanda funicular has had an intriguing yet eventful past. In the beginning, the service was also used by mountain villagers, who loaded their goods onto it to be sold at the municipal market or used it to transport calves to the slaughterhouse.

However, the funicular’s happy existence was to be interrupted during the Civil War. On 18 June 1937, the night before the Battle of Bilbao, the Nationalist Faction bombed the summit of Mount Artxanda partially destroying the tracks and the upper station. The service was not to be re-established until July 1938.

From then on, the people of Bilbao were able to enjoy the funicular for almost four decades until 25 June 1976 when an unfortunate accident caused a prolonged closure of the service. When replacing a worn out traction cable, a chain of faults caused a wagon to plunge down towards the lower station with several operators eating lunch inside. All of them managed to jump out except for Isidro Aurrekoetxea, who was not able to avoid the impact but was lifted out of the wreckage miraculously alive.

It wasn’t until 1983 when, under the management of the City Council, the service was restored and reopened to the public. However, that same year it had to be closed once again between August and November, due to the catastrophic flooding that devastated Bilbao that summer. The funicular started running again on 4 November 1983, heralding a new era that has not been interrupted to date. In the upper station, which is reached in three minutes on a journey covering 770 metres and an elevation gain of 226 metres, a series of photographs trace the installation of the new funicular and the conditions of the old facilities in 1983. A reminder of a hundred-year-old mode of transport that holds a special place in the heart of the people of Bilbao.