Bilbao What to see and doBilbao for couples: six things to do by land, sea and air

Bilbao for couples: six things to do by land, sea and air 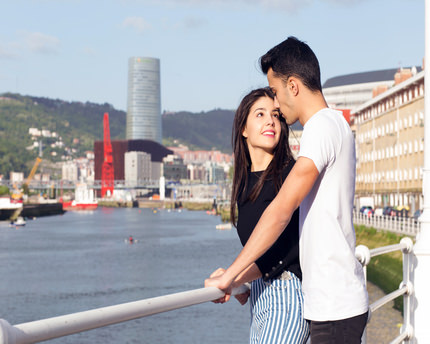 Young couple in love near the river of Bilbao, Spain. Outdoors, on a sunny day.

“[…] Paseo de Los Caños, on whose paths so many romances blossomed, and where, at the end of the century, the craftsmen with heavy hearts told the sweet craftswomen, who trembled with romance, that they loved them on golden-hued evenings in which the leaves of the chestnut trees turned yellow […]”. This is how the writer and Bilbao native Luis Antonio de Vega described his blind conviction on the romantic spirit of Bilbao. The Paseo de Los Caños promenade, recently remodelled by the City Council to the joy of local residents, is just one example of the numerous places tucked away in the Basque capital for couples seeking to emulate those craftsmen and craftswomen of the nineteenth century. Flanked by the imposing mountains of Pagasarri and Artxanda and the inlet of the Nervión river, Bilbao can be viewed from numerous different perspectives. Below is a varied selection of things to do for couples, either by land, sea or air, to discover Bilbao’s fantastic and diverse heritage. It goes without saying that the fourth element—fire—is up to the pair of love birds.

Some things never lose their appeal and that definitely applies to the mythical pintxopote—or the pintxo route—which is at its best in the medieval Casco Viejo quarter with its colourful buildings and buzzing atmosphere. Given that it is the cradle of Bilbao, it’s no wonder that it is home to the city’s oldest buildings and, in turn, the most distinctive restaurants and cafes. Bacaicoa, with its famous pintxo nicknamed chorizo del infierno, or chorizo from hell, is situated on Plaza Unamuno, the ideal starting point for visiting the Siete Calles—the seven oldest streets in the city—while sampling the unique flavours of Basque cuisine. Close by, on Calle Iturribide are the gildas (guindilla pepper, anchovy and olive pintxos) of Bar Fermín, and a little further along, on Calle María Molina, the delicious stuffed mussels of Baste. With any luck, you may bump into some txikiteros, groups merrily singing traditional Basque songs called Bilbainadas whilst hopping from bar to bar. Other places recommended for their atmosphere and the quality of their pintxos are Calle Ledesma, Calle de la Diputación, Calle Poza, Calle Deusto, Calle García Rivero and the Guggenheim district.

One of the great attractions of Bilbao is without a doubt its wide range of markets, from the most traditional to those of a more vintage/alternative nature. Held throughout the year in different parts of the city they offer a great selection of used objects, second-hand clothes and weird and wonderful gadgets. Open your Ganbara, which takes place in Espacio Open—the former Artiach biscuit factory—in Zorrozaurre on the first and last Sunday of the month, is an environmentally-friendly version of the classic flea market with recycling and reuse the order of the day. At the more alternative end of the scale is Dos de Mayo Market, held on the first Saturday of the month on the street of the same name offering a great selection of new and vintage clothes, imitation jewellery, books, vinyl records, furniture and much more. The Flower Market is another of the city’s quintessential markets and is a must for couples. Every Sunday morning Arenal Park plays host to numerous stands selling an extensive array of seasonal flowers, plants and seeds. Casco Viejo is also home to the Sunday Market—a market that closely resembles the legendary Camden market in London—which takes place on the last Sunday of the month and is perfect for strolling around post-pintxopote.

Sea: exploring the coast on a sailboat

One undeniable benefit of the urban transformation that Bilbao underwent at the end of the last century is its Metro network. If you want to see what is beyond the centre of Bilbao, Line 1 takes you directly to the town of Plentzia, famous for its tranquil beach with golden sands. From the Metro station, take the path that runs alongside the Plentzia river with its moored boats before flowing into the sea. Thanks to the protection offered by the bay, surfing schools and other water sports are a common fixture. Watching the sunset from one of the restaurants lining the promenade is priceless.

However, if what you’re after is a true seafaring experience, you can hire a private sailboat at Getxo Port, which is also accessible by Line 1 of the Metro, and set sail to discover places such as the Old Port, the cliffs of Galea, the beaches of Azkorri and the windmills of Punta Lucero within two hours. What’s more, the itinerary is planned in such a way that upon returning you will be able to enjoy a romantic dinner with your partner as the last few rays of sunlight shine down upon you.

Sky: Mount Artxanda and a ride in a hot air balloon

It was from Mount Artxanda, the quintessential green lungs of the city, where the renowned architect Frank Gehry decided on the final location of the Guggenheim Museum. The summit offers the city’s most spectacular panoramas, intersected by the estuary and its many bridges. Although going up by foot is a great option if you have the time, the funicular, found just a few metres away from Paseo Campo del Volantín, goes up the mountain in under three minutes. Although today it is above all a place for strolling and taking in the views, from the late nineteenth century it was a place of entertainment for local people, as denotes the old casino, destroyed during the Civil War, and the theme park, which no longer exists. However, the legendary restaurant Txakolí Simón, specialised in lamb chops washed down with a glass or two of the local txakolí wine, still stands.

If the height of Mount Artxanda is not quite enough for you, there are several companies in Bilbao specialised in hot air balloon rides for a bird’s eye view of the city. Lasting an hour and a half, you can leave from any one of the three following areas: Orduña valley, Urdaibai or Valderejo. What’s more, the experience includes a traditional lunch with a complementary glass of cava.