Bilbao What to see and doBilbao for the solo traveller: Three options for exploring Bilbao’s history, sports and countryside 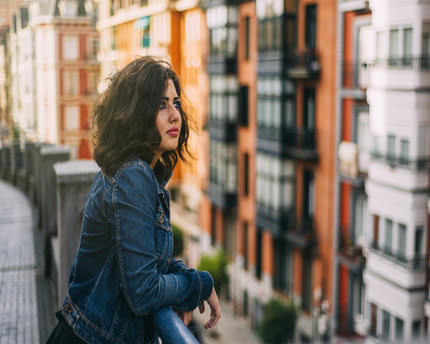 A young woman in an urban environment.

If you’re thinking about taking a trip to Bilbao with only your rucksack or suitcase for company, you’re in luck. After a long industrial past, the capital of Biscay has now been transformed back into a cosmopolitan city which offers (in both its centre and on its outskirts) a huge array of options for learning about and enjoying Basque culture in all its forms. For lovers of adventure and excitement, why not take a guided tour of the secrets and legends of Bilbao at night? Or a cycling trail through the mountains and surrounding meadows? If, however, you’re looking for peace and relaxation, there’s nothing to beat getting out of the urban centre to explore some of the attractions of the province’s more rural areas.

A journey through the hidden history of Bilbao

The solo traveller tends to wander at random through the streets and avenues of Bilbao, in search of the authentic city atmosphere. However, it’s also possible to explore the city under cover of darkness in search of quirky history so unusual that it has slipped through the net of time. Intrigues, catastrophes, enigmas and legends are fertile ground for the mysterious journey that Guías Artea has been organising for several years at nightfall every Saturday. Like the night watchmen of old, History and Arts graduates open the doors to the secrets that Bilbao has guarded since its founding over seven hundred years ago.

The story opens with the terrible railway accidents (similar to those suffered in the Montparnasse district of Paris towards the end of the nineteenth century) that occurred in the Plaza Circular de Abando. Later, the guided tour reaches the estuary, where it revives the legend of the Man Fish: a young man from Cantabria who, during the seventeenth century, disappeared into the Nervión while playing with his friends—and was caught as a fish four years later on the distant shores of Cadiz. The next stop, the Old Quarter, has the largest hoard of secrets. The gems include the surprising origin of the fifth entrance to the Plaza Nueva, its flooding for the Venetian festival of 1872, and the empozamientos—executions in which a stone was hung around the neck of the condemned person, who was then thrown into the water—enacted at the Puente de San Antón in medieval times.

As this tour is a group activity in which up to forty people can take part, it can offer a fantastic opportunity to meet other travellers who are also visiting Bilbao.

Pedalling over the five hills of Bilbao

A few years ago, the authorities initiated a grand tour of the forest and urban parks that surround Bilbao. Popularly known as the Anillo Verde [Green Ring], the signposted route comprises forty kilometres (or seventy, if we include variants and access routes from the various neighbourhoods).

If it’s a sunny morning and you fancy combining sightseeing and sport, you can hire a bike and pedal up one of the five hills that surround Bilbao. From their moderate heights, the hills—Artxanda, Monte Avril, Arnotegi, Pagasarri and Arraiz—offer extraordinary views of the city, and all have recreation areas where you can rest and eat. If you can only set aside one day for a cycling trip, the best thing is to decide on the route that appeals to you most, as only the best-prepared cycling enthusiasts have proved capable of completing the whole Anillo in one go. We can recommend the Artxanda-Avril itinerary, where the funicular takes you to the first stage so that you avoid the steep climb; then, you have a downhill ride for an hour and a half on the slopes of Monte Avril which brings you finally to the district of La Peña. For a while, you follow the old road known as the Calzada de los Zamudianos, part of the Camino de Santiago, which only adds to the charm of this itinerary.

San Juan de Gaztelugatxe, where the peace and quiet is enhanced by the smells of the sea

The islet of Gaztelugatxe—perilous castle in English—is a place you really must see if you are visiting the province of Biscay. The islet is barely a forty-minute journey by car from Bilbao, and constitutes one of the most remarkable landscapes on the Basque Country coast. It consists of tunnels, arches and caves formed by the sea over many centuries—not surprisingly, it recently provided the ideal location for the popular series Game of Thrones.

The origin of its name is partly explained by a legend that tells of how Saint John arrived at the nearby port of Bermeo and, seeing the island in the distance, was able with three gigantic strides to reach its highest point, where his hermitage was located, leaving his footprints on the path. Nowadays, this path is a twisting, man-made stone walkway, with gaps where the locals find curative powers. But this is not the only legend concerning the area. There is the tradition of climbing up and ringing the bell three times to make a wish, and the superstitious practice of the fishing boats from Bermeo which, before setting sail, circle the islet several times to port and starboard—so that the saint will bring them luck.

Although it is possible to make a quick visit to the islet, the peace and silence that pervade the area tempt the visitor once there to stay and prolong the moment. On the way back, we find the Eneperi restaurant, an established feature of the seascape. The restaurant has been in existence since 1816, and offers exclusively Basque cuisine. The bar attached to the restaurant is called cervecería Galerna, and was established to commemorate the terrible galerna, or violent storm, of 1912, which caused the death of 143 fishermen from the local towns and villages.

To find more information about the options described above, we recommend you visit the following websites: