Bilbao What to see and doThe church of San Nicolás de Bilbao, a Baroque jewel in the heart of the city

The church of San Nicolás de Bilbao, a Baroque jewel in the heart of the city 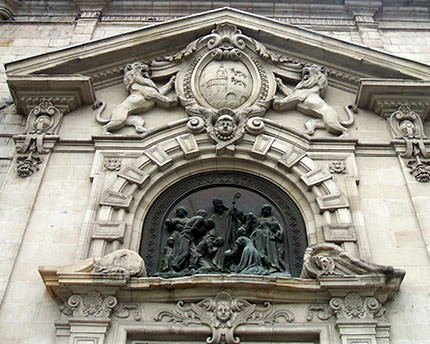 Bilbao offers leisure activities to suit all tastes. So, in the centre of the city we can take advantage of such appealing cultural activities as the Guggenheim Museum or the Centro Azkuna; we can enjoy sports on Mount Artxanda, or we can visit numerous buildings steeped in history, such as the cathedral of Santiago or the church we are focusing on today, the church of San Nicolás.

The church of San Nicolás de Bari enjoys a privileged location in the centre of Bilbao, a short distance from Plaza Nueva and Teatro Arriaga and facing the Areatza park. This lovely church was designed by the Basque architect Ignacio Ibero, and was built between 1743 and 1756.

However, its history dates back to a time when the El Arenal de Bilbao promenade was no more than a stretch of sand on the edge of the Nervión estuary, which was subject to regular flooding. This area later became a fishing quarter, and it was the fishermen who, in medieval times, built a hermitage there to honour Saint Nicolás de Bari, the patron saint of seafarers. As the population increased, this tiny hermitage was enlarged until it became a parish church. Unfortunately, it was destroyed by flooding in 1553.

The church of San Nicolás has a Greek cross floor plan set within a square. Considering that Ignacio Ibero had been tasked with continuing Carlo Fontana’s project for the famous sanctuary of Loyola, it seems logical that the Roman architect’s design would influence Ibero’s decision to use a central floor plan in his design for the Bilbao church. These kinds of floor plans always create small dead spaces in the remaining corners, which, in the church of San Nicolás, contain the chapels and the sacristy.

The church’s façade, constructed like the rest of the building from hewn Ganguren stone, reflects a Baroque style remarkable for its austere character in comparison with the Roman Jesuit churches of the Gesù and San Ignacio. This simplicity is evident in its windows and in the fine pilasters and cornices that cover the frontage, directing attention towards the focal point, the main entrance, above which a tympanum frames two lions rampant with the shield of Bilbao between. The cast bronze relief above the door is the work of the Barcelona sculptor Josep Llimona, and is the result of a renovation of the main entrance at the end of the nineteenth century.

The ruggedness of the lower part of the building gives way to a lightness in the upper part of the façade, where the church’s two robust towers are capped with crosses. The breathtaking interior cupola appears from outside the building as an octagonal prism, although its presence is somewhat obscured by the belfry that surmounts the façade.

Moving inside the church, we find the set of five magnificent altarpieces carved in the same dark walnut as the pulpits. These altarpieces were the work of the man who was then the Court sculptor, Juan Pascual de Mena, renowned, among other things, for creating the famous sculpture of Neptune on Madrid’s Paseo del Prado. However, in tracing out the altarpieces, he was assisted by Diego Martínez de Arce.

The outstanding piece is, of course, the one in the high chapel, with the figure of Saint Nicolás de Bari occupying the central niche. The figure of the then bishop of Myra can be seen in the wings of the altarpiece, along with Saint Laurence and Saint Vincent, while in the lower panels we see the crucified Christ, together with Saint Peter and Saint Paul. Two impressive sculptures representing the allegorical figures of Charity and Fortitude appear on either side of the central pinnacle.

All the altarpieces were restored between 2007 and 2011 by the District Council of Biscay, and can now be seen in a perfectly preserved condition.

The church of San Nicolás in the history of Bilbao

This religious edifice played a special role in the history of Bilbao, as it was the site chosen by the Juntas Generales (representative assemblies) of Biscay for the signing of the Cádiz Liberal Constitution—popularly known as La Pepa—in 1812.

Four years after Bilbao countersigned the constitution, the church was struck by lightning, and later, during the Carlist Wars, the church was used as a munitions store, a forge for producing bullets and even as a workshop. Luckily, the church suffered no great damage during those years, so that nowadays, we can admire both its original floor plan and its elegant façade.

It should, by now, be obvious that, thanks to both its unique design and its historical importance, no visitor should leave Bilbao without seeing the Baroque church of San Nicolás.