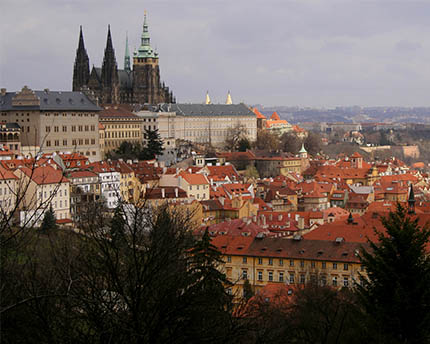 The skyline of Hradcany – or the Castle District – follows visitors wherever they go in the Czech capital. Its elevated position and the hefty proportions of its buildings such as St Vitus Cathedral make it impossible to miss when walking through the centre of Prague.

The castle is in actual fact a historical complex formed of religious buildings, aristocratic mansions, cultural institutions and delightful gardens, which also offer extraordinary views of Prague’s urban landscape. Proof of this are the panoramic views that can be enjoyed from Hradcany Square, a stunning space lined by no less than the Archbishop’s Palace, Schwarzenberg Palace and Tuscany Palace. As if that weren’t enough, the square is bound on the eastern side by the entrance courtyard to the castle, where the traditional changing of the guard takes place everyday at midday.

In the ninth century, Prince Bořivoj ordered for Prague Castle to be built, which gradually led to the construction, within its walls, of residences for the court’s staff and certain craftsmen; homes that over time transformed into what would later become known as Hradcany. However, the modest constructions were destroyed in the fire of 1541, encouraging many aristocrats to instead build their elegant mansions on the site.

Due to the high concentration of heritage in the Hradcany district, you could well set aside a whole day for discovering its secrets. There are various ways to get there: by means of a pleasant, albeit steep stroll, or by saving up your energy to wander through Hradcany by taking line A on the metro or tram 22.

Once there, be sure not to miss St Vitus Cathedral, the spiritual centre of the castle and the historical setting of numerous royal coronations, weddings and funerals. Gothic aesthetics take precedence in the building, although the lengthy period of time that it took to construct it – spanning six centuries – has given rise to a notable mix of artistic styles. Don’t leave without pausing in front of the Last Judgement mosaic, created by Venetian artists, in St Wenceslas chapel, which stands out for the rich ornamentation of its walls, covered with over 1,300 precious stones.

Other religious buildings to bear in mind within the Hradcany district include St George’s Basilica, situated in front of the apse of the cathedral, and Our Lady of Loreto Sanctuary, in whose cloister you can contemplate a replica of the Holy House, where, according to tradition, the Annunciation took place.

However, without a doubt, one of the most magical and most Instagrammable places in the Hradcany district is Golden Lane, not just because of the beauty of its picturesque coloured houses, but also because, between 1916 and 1917, number 22 was the study of the great Frank Kafka. These days, the narrow street is full of different shops, which is why it has become a favourite place to pick up a souvenir from your time spent at the castle, such as a puppet, pieces of ceramic or a copy of Kafka’s most famous work: The Metamorphosis

Prague Castle, which houses St Vitus Cathedral and a large collection of historic buildings, is one of the biggest tourist attractions in the city.

St Vitus Cathedral, the Czech Republic’s most important Gothic place of worship, was the setting for the coronations of the kings of Bohemia.

The Golden Lane, one of the city’s most charming spots, has been home to alchemists, sorcerers and even Franz Kafka. We reveal all of its secrets.