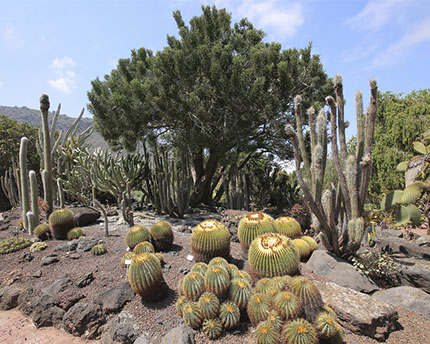 For the last 70 years, the impressive, 27-hectare Botanical Garden Viera y Clavijo (‘the Canarian Garden’) has not only acted as a guardian of flora endemic to the island of Gran Canaria but also to the whole of the Canary Island and other Macaronesian islands, including Cape Verde, the Azores, Madeira and the Savage Islands.

Viera y Clavijo is the largest botanical garden in Spain and has an incredible collection of indigenous and foreign plant species. Located just on the outskirts of Las Palmas, it was established on a slope of the Guiniguada ravine, shielded from the wind. The optimal location contributes to the creation of a microclimate where flora can thrive.

It is the ideal destination for a family excursion, but is just as satisfying to visit on your own. The visit can take up to three hours so be sure to set aside enough time to really explore this wondrous landmark. Read on to discover the must-sees during your visit!

A Swedish botanist behind the Canary Island Botanical Garden

When the Swedish botanist Eric Sventenius was working at the Botanical Garden of Tenerife, he decided he wanted to continue the work of the 18th-century Canarian pioneer botanist José de Viera y Clavijo and create a unique botanical garden dedicated to Canarian flora. In fact, the botanical garden would later be named after the visionary Canarian botanist. 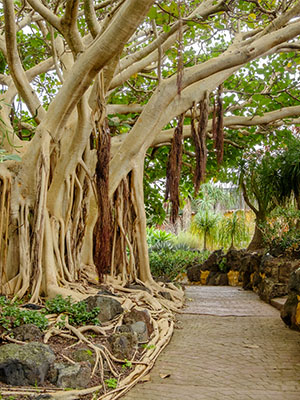 Ficus trees in the Botanical Garden of Viera and Clavijo.

The work on laying out the botanical garden began in 1952 and Eric travelled all over the Canary Islands, collecting a comprehensive collection of plant species. However, this was just the first step in a 40-year journey because the flora would need that much time to fully grow.

The Swedish botanist had to overcome important challenges when designing the garden. Special consideration had to be given to the layout of the paths and waterways; how the different shades of greens would converge; and even the colour of the buildings to achieve the desired end result.

This was incredible feat to undertake in a post-war Spain that was unfamiliar with scientific endeavours of that scope, and it almost brought poor Eric to the brink of despair. However, he somehow managed to pull it off and the council of the Canary Islands officially inaugurated the Canary Island Botanical Garden in 1959. Sadly, Eric never got the chance to see the garden in full bloom – he was involved in a terrible car accident, right in front of the gardens, which claimed his life in 1973. You can pay your respects during your visit as he was buried on the grounds of the botanical garden.

Following his death, the botanical garden continued to grow and it evolved into a research, conservation and educational centre. New facilities were built to house laboratories, a library, a herbarium and greenhouses. The botanical garden is renowned internationally, attracting foreign researchers for its work and environmental educational model.

A tour through the Botanical Garden Viera y Clavijo

You can access to the higher grounds of the botanical garden via motorway GC-110. The entrance point leads you directly to Plaza de Viera y Clavijo. The square offers sweeping views of the park and the phenomenal layout, built into the cliff face of the Guiniguada ravine. You’ll also be able to see the endangered Canary Island juniper (juniperus cedrus) which can hardly be found growing in the wild.

You can access the lower grounds via motorway GC-310. The entrance point is the stunning Plaza de las Palmeras, also known as Plaza de Matías Vega, in honour of the former president of the council who supported the project. The square is dotted exclusively with the majestic Canary Palm Tree, also native to the other seven islands. These palm trees can reach 25 m in height and have long, fan-shaped leaves.

On the opposite end of this access point, you’ll find one of the two historic bridges crossing the ravine: Puente de Piedra (the ‘Stone Bridge’), built out of a red stone from the Ayagaures quarry (Gran Canaria). On bright sunny days, you’ll be able to spot the Gran Canaria giant lizard that can grow up to 90-cm long. They are the largest reptiles within the family of true lizards.

The Garden of the Islands

Nestled between Plaza de las Palmeras and Jardín de Plantas Crasas, lies the amazing Jardín de las Islas. More than 2,000 different species of plants can be found in the Canary Islands. 600 of these are native to all the islands, while 399 are exclusively endemic to a single island. This area showcases flora unique to each island.

The Garden of Succulents

This part of the garden is dedicated to the verdant succulent plants with more than 10,000 different species on display. The most widely known are the North American cacti. This plant species lives in desert or semi-desert climates. You’ll be able see more than 2,000 different types of cacti from all around the world in this part of the gardens. There are cacti from Madagascar, strange aloes from Africa and even cacti from Mexico.

Other unique gems of the botanical garden

There is just so much to see that we can only give you a few key tips to guide you through its beauty. The Macaronesian Ornamental Garden is located close to the Puente de Palo, and next to Plaza de Fernando Navarro, named after the first caretaker of the park. It harbours a wide selection of flora from all five archipelagos from the North Atlantic Ocean, many of which are on the brink of extinction.

The two greenhouses located in the Canary Island Garden recreate the optimal weather conditions needed for tropical plants to thrive. This includes orchids, ferns and species common to the laurel forest, such as the maidenhair tree (gingko).

On the left side of the ravine, lies the Palmetum, home to a rich variety of palm trees from all over the word, including the royal palm tree, the queen palm and the fishtail palm.

The right side of the ravine houses the recently inaugurated Garden of the World. You’ll be able to walk amongst such unique species, such as the Australian Callistemon, the African Baobab and the Ginkgo Biloba – a living fossil directly from China. End your visit with a walk through the Japanese Garden and a park laden with pretty water lilies.

The gardens also boast an exhibition hall, a research centre and seed bank, where seeds from native Canary and Macaronesian island species are stored at controlled temperatures.

How to get to the Botanical Garden Viera y Clavijo: 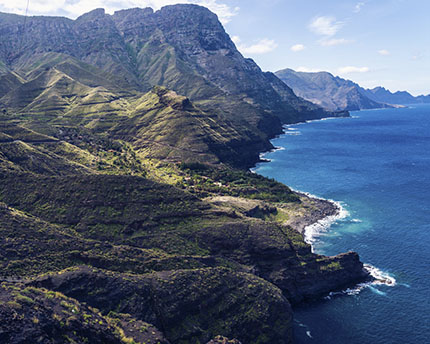