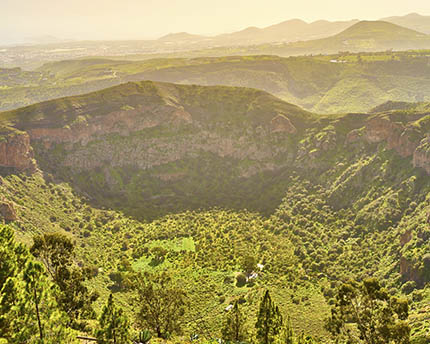 The Caldera de Bandama is one of the most unique natural spaces on Gran Canaria, and yet many of the tourists who holiday on the island each year don’t even know it exists. At just a short distance from the island’s capital Las Palmas, it’s well worth a visit, and not just to wonder at the immense geological forces that shaped it but to admire the scale of human adaptation to what is a complicated environment.

The area appeals to hikers (it’s challenging but accessible) and to nature lovers in general. From the summit of Pico de Bandama you’ll be rewarded with the best panoramic views of the north-eastern zone of the island, overlooking the capital surrounded by the Atlantic Ocean. On a clear day you’ll even make out neighbouring Fuerteventura.

What is the Caldera de Bandama?

The Caldera de Bandama is a sunken volcanic crater. When the volcano erupted around 2,000 years ago, the surface layer covering the volcanic crater collapsed, leaving behind the enormous hole now visible from the upper edge of the formation.

One of the most interesting features of the Caldera de Bandama is its name. Bandama is the Hispanicised version of Daniel Van Damme, a Flanders native who purchased the area to produce wine. Known as Monte Lentiscal, it still has vineyards today, and several wineries take advantage of the rich volcanic soil and the protection afforded by the slopes to produce quality wine. One example is Hoyos de Bandama. 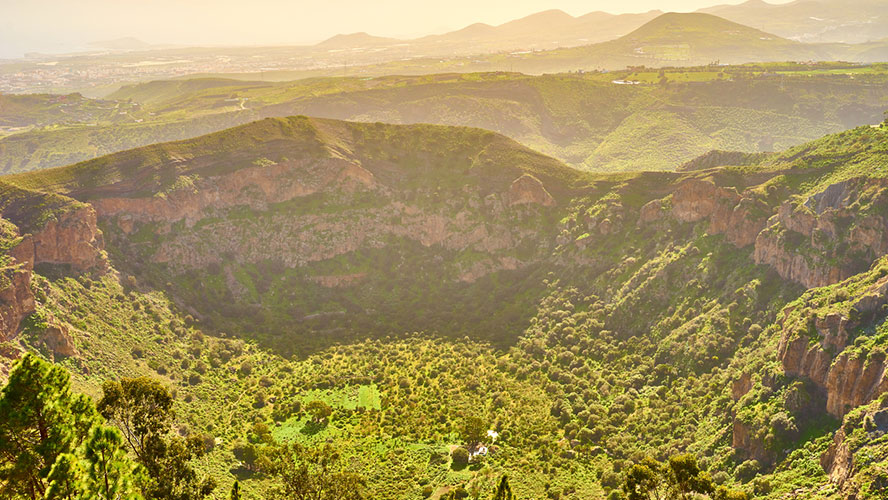 The entire area has been a designated National Monument since 1994 and is also an Ecologically Sensitive Area.

The Caldera de Bandama was created by a volcanic process that began around 4-5 thousand years ago. It ended with a colossal eruption that caused the mouth of the volcano to collapse into the magma chamber. The result: a ginormous, almost-circular hole with a diameter of more than 1 km, a perimeter of 3 km and a depth of around 200 m.

The sharp crags at the upper part of the Caldera de Bandama can be navigated along various trails. After around half an hour you’ll reach the floor of this protected space. Inside the caldera is a lush carpet of shrubs and trees including olive, various species of palm, the Canary Islands dragon tree and some endemic species such as tajinaste and guaydil. All are undoubtedly the remains of the thermophilic forest (capable of withstanding high temperatures) that lined these volcanic walls before the arrival of the Spanish conquistadors. 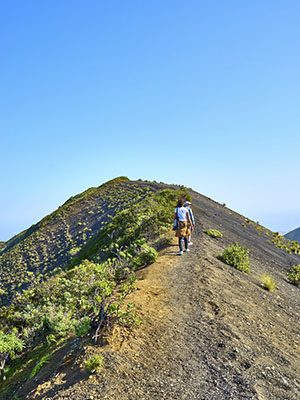 Hikers walking to the peak of Bandama

In terms of the local fauna, keep your eyes peeled for the Gran Canaria giant lizard and for birds such as buzzard, kestrel, long-eared owl and other owl species.

There is evidence that the inside of the caldera was used in pre-Hispanic times for farming. The Cueva de los Canarios archaeological site on the northern slope is an old silo that was used to store crops and other food. Some rocks also have engravings.

Pico de Bandama is the most prominent overhang along the perimeter of the caldera. Rising to 570 m, it comprises two huge chunks of magma that were spewed out during the volcanic eruption. It now has one of the best viewpoints in the entire north-eastern part of the island. Aside from the Caldera de Bandama itself, you can make out Las Palmas, La Atalaya and Santa Brígida, as well as the golf course owned by the Real Club de Golf de Las Palmas.

The hiking trail between the capital Las Palmas and Pico de Bandama passes through some amazing natural landscapes. It’s fairly challenging (18 km with long climbs), so make sure you’re in good shape. Refuel after your exertions in one of the bars and restaurants near the caldera. Try Bodegón Vandama (Crta. Bandama, 116, Santa Brígida) for spectacular views and the best of traditional Canarian cuisine and Spanish fare.

The Caldera de Bandama is undoubtedly one of the most impressive geological features on Gran Canaria. That said, the island offers plenty other interesting landscapes for volcano buffs. Here are a few suggestions:

How to get to the Caldera de Bandama: 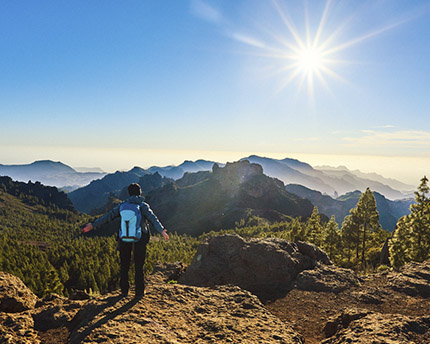 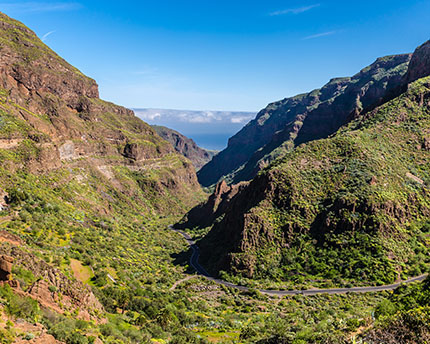