Barcelo.com Barceló Experiences Lanzarote What to see and do

The town of Playa Blanca, part of the municipality of Yaiza, was a small fishing village in the volcanic landscape of southern Lanzarote until the 1970s, when the first British tourists began to arrive. Since then, this village with a population of just under 12,000 has become the island’s youngest destination; a paradise where you can stroll along a 7-kilometre long seaside promenade with views of Fuerteventura and Lobos Island, or relax on the nearby virgin beaches of Punta del Papagayo, situated in the Los Ajaches Natural Park. There, the silence, the golden sand and the contrast between the turquoise of the sea and the reddish colour of the volcanic rocks will make it a swim to remember.

Playa Blanca is the perfect place for forgetting about the world for a few days, without giving up its greatest pleasures. The long seaside promenade offers something for all tastes: shopping, sampling the local cuisine—which relies heavily on fish and seafood—having a go at water sports at the Marina Rubicón harbour, playing padel or simply watching the sunset from a terrace. Party animals will find nightlife at Marea Terraza Lounge Bar, which has spectacular views, and at the nightclub Jungle´s. For those who prefer a little more culture, the town is home to Cultural Heritage Sites such as Las Coloradas (or El Águila) tower, built between 1741 and 1744 as a defence tower, and the Pechiguera lighthouse.

Playa Blanca’s greatest attraction, however, is its location as a perfect base from which to travel to some of the most spectacular spots in southern Lanzarote, which at times seems like another world. Just a few minutes away from the town by car are places such as the tranquil natural pools of Los Charcones, the Timanfaya National Park, the volcanic vineyards of La Geria, the immense Janubio Salt Flats and the Martian-like green lake of El Golfo. By ferry from Playa Blanca, a journey that lasts little under half an hour, we can reach the nearby island of Fuerteventura, where you can spend the day amidst the white dunes of Corralejo beach.

However, in this article we want to tell you about what is—due to its sheer beauty and remote location—perhaps the most special place in the south of the island: Punta del Papagayo.

Just a few minutes away by car from Playa Blanca there is a stretch of land with volcanic rocks that will make you feel like you’ve stepped foot on Mars. Punta del Papagayo is a secluded spot on the southernmost extreme of Lanzarote which, due to its being located in Los Ajaches Natural Monument, you have to pay a small price to access. This entrance fee allows you to spend the whole day enjoying everything this pristine area where urbanisation was held at bay. In fact, the only signs of civilisation in the area are the car park, a camp site and one or two beach bars. That’s it. The area is dotted with virgin beaches, such as Playa Mujeres, Caleta del Congrio, Caletón de San Marcial, Playa de la Cera, Playa del Pozo, Playa Puerto Muelas and, the most popular of them all, Playa Papagayo 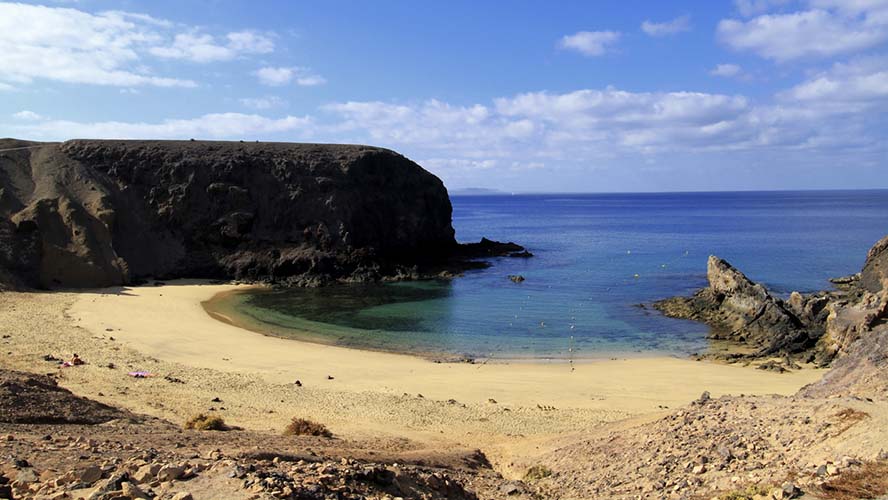 If you are looking for a quiet beach to while away the day then this is it. Surrounded by the natural beauty of Los Ajaches Natural Monument, Playa Mujeres has a white-sand cove that looks onto the beautiful turquoise waters of the Atlantic.

Although it is only 400 metres long, there is more than enough space to enjoy the sun and take a dip in its calm waters. What is more, the type of visitor to this beach is varied so you can be sure to feel at home whether you travel alone, as a family or with friends. Also, there is a car park and plenty of cleaning facilities to ensure the beach is always in pristine condition.

This small beach is only accessible by foot, making it one of the quieter places in Lanzarote and quite possibly the ideal getaway spot you’ve been looking for. Take a dirt path from Playa Mujeres to Caletón de Marcial and within just a few minutes you can make the most of your entrance fee by enjoying two beaches instead of one. Its crystal-clear waters will enchant you immediately.

Also known as Playa de la Cruz, this beach is accessible by the surrounding beaches during low tide and, although it is only 340 metres long and 10 metres wide, it proves to be the perfect size to enjoy a day at the beach without being too crowded. Equally as beautiful as its neighbouring beaches, Playa del Pozo does not have any shade or services so don’t forget to bring a beach umbrella, sun cream and plenty of water.

Measuring little more than 100 metres long by 30 metres wide, this charming little beach offers some of the best views in Los Ajaches Natural Park. From the shore you can see the small islands Islote de Lobos and Fuerteventura and, since the next beach along is the famous Playa Papagayo, there are plenty of restaurants just a stone’s throw away.

Playa Papagayo, with its perfect half-moon shape, is completely surrounded by cliffs (like many of the beaches nearby) that shelter it from the wind, a valuable characteristic on an island like Lanzarote. Since it is actually a small bay, its waters are ideal for snorkelling, too.

Golden sands, crystal-clear waters, very little wind and calm waves are what define Playa Papagayo. What is more, even in summer when people flock to the area, it still offers visitors the feeling of being far away from the hustle and bustle of civilisation. If you visit during the low season, however, it will feel like you’ve been shipwrecked on a desert island.

Located next to the Playa Puerto Muelas, visitors to Playa Caleta del Congrio actually depend on this beach’s car park. Being a little further away from the car park has its advantages and Playa Caleta del Congrio has plenty of them. The first of which is that it is the perfect place to practise nudism in the area, even though it is a ‘mixed beach’ meaning there will be those with swimwear and those without.

Although it is not very large – just 280 metres by 20 metres – it is a delightful place to spend the day by the sea and surrounded by the strange aridity of the desert nearby. Be sure to take a picnic and some bin bags so as to leave this virgin beach in the same state you found it.

How to arrive in Punta del Papagayo: