Majorca What to see and doThe best beaches in Majorca

The best beaches in Majorca 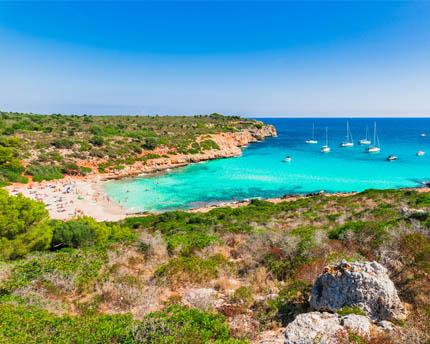 With more than 550 kilometres of coastline, the island of Majorca boasts a large number of beautiful beaches. In total, there are more than 345. There are many types and sizes of beaches, from small stone coves to kilometres of fine sandy beaches. But they all have one thing in common: their spectacular crystalline waters. Majorca’s best beaches have been awarded the blue flag, a distinction granted by the European Foundation for Environmental Education, which identifies beaches and ports that meet demanding requirements regarding environment and facilities.

During peak season, Majorca’s busiest beaches have a lifeguard service, which gives beachgoers peace of mind, especially if they have children. Below is a list of the most beautiful and emblematic beaches in Majorca:

Located 14 kilometres east of Palma, this beach is one of the best and most visited by tourists on the island and is made up of the beaches of Can Pastilla, El Arenal and Cala Estància. In fact, a good part of it belongs to the municipality of Palma and the rest to Llucmajor. All in all, there are a quite a few kilometres of fine sand lined with bars, restaurants, hotels and souvenir shops. It is a beach with dunes and protected vegetation, where you can practise sports. It looks very different in summer and winter. Many years ago, it was a space of quarries, but at the beginning of the century it began to be urbanised and today it is full of Germans, British, Russians and a few Spaniards. Apparently, the name Can Pastilla comes from an old innkeeper who traded contraband tobacco pills.

It is one of the most beautiful beaches in Majorca. With crystal-clear waters and fine sand, it has parasols, sunbeds, showers, dressing rooms, beach bars, volleyball areas… and of course, a blue flag. It is just over three kilometres in length and about 20 metres wide. It has a special playground for children and countless water sports options, such as kayaking, SUP and pedalo, as well as a fine golden sand to build nice castles.

Located 6 kilometres from the port of Alcúdia and right next door to Coll Baix, this beach is a haven surrounded by rocks on which a torrent collapses, which dries in summer and is revived in winter. The water is reached through a breakwater. There is an urban legend that in the depth of this strip of sea you can find a UFO base.

It is one of the best beaches in Majorca. It has five kilometres of fine sand, with dunes, pine trees, a public recreational area and a natural park: La Albufera. It is an ideal beach for families since it has calm and shallow waters and there is a good service of bars and restaurants, toilets, showers, etc. It is considered the third best Spanish beach to visit with children, after Las Canteras (Las Palmas) and Victoria (Cadiz).

With its breathtaking golden sand, it is one of the most beautiful beaches in Majorca. It is located in one of the most spectacular spots on the island, among dense pine forests and views of the Tramuntana mountain range. The beach is approximately one kilometre long but it is quite narrow. It is a very safe and easily accessible beach, making it ideal for families. It is very popular due to its proximity to Cap de Formentor, where a lighthouse is located. From here, on a clear day, you can see the island of Menorca. On the beach there are two restaurants and showers.

It is said that it is the most beautiful beach in Majorca. It is a very long sandy beach with crystalline waters that is very frequented by nudists and non-nudists alike. This heavenly beach has been saved from tourist speculation thanks to the intense actions of its residents. With dunes covered with thick pine trees and junipers, it is known as the last unspoiled haven in Majorca. The beach can be reached through the urban centres of Sa Ràpita, from the Watersports Club; through Ses Covetes, and through Colònia de Sant Jordi. Behind the dunes of Es Trenc, the wetlands of Es Salobrar can be seen. In 1984, the Balearic Parliament declared it a Natural Area of Special Interest, which protects it from possible property operations.

It is one of the best beaches in Majorca. Located on the south-west coast of the island, about 10 kilometres from Palma, it stands out due to its white sand, its exclusive ambience and its luxury shops. It is the largest beach in the area near the town of Illetas. Many young people come here attracted by its beach clubs and lively atmosphere. The beach, one of the best in Majorca, is approximately 200 metres long and its waters are calm and shallow. You can rent sunbeds and parasols here but you can’t practise water sports. There are several beach bars and restaurants on the beach itself.

Located in the far south-west of Majorca, just six kilometres from Magaluf, due to its small size this beach is quiet and calm. It is also one of best and most beautiful beaches in Majorca and is well known by Germans and Brits who appreciate the uniqueness of this space that is only 30 meters long and 20 wide. Parasols and sunbeds are available but there are no water activities. Behind the beach there is a pine forest and small hills that make it even more attractive. 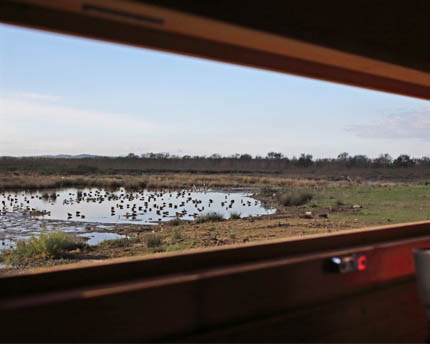