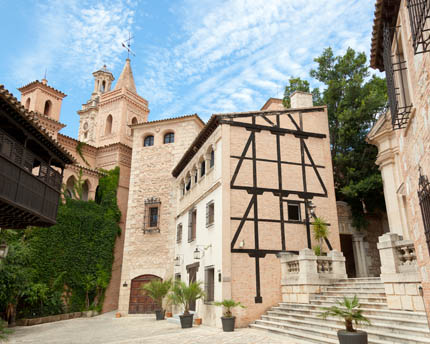 The so-called Pueblo Español is an open-air museum located next to the historic centre of Palma de Mallorca, offering visitors the chance to discover Spanish architecture. This open-air space brings together 72 architectural works distributed over 18 buildings, 15 streets and 12 squares at a 1:2 scale. These works have been created with materials coming from the different regions that are represented. In this area, which spans over 24,000 m2, you can find a reduced version of the Alhambra’s Patio de los Arrayanes, the Burgos Cathedral and the house of El Greco located in Toledo, among many others. All of these monument reproductions are situated in a harmonious collection that recreates a medieval village, completely surrounded by a wall. It is possible to go around it, attempting to identify all of the buildings and monuments, and then to enjoy the delicious gastronomy of some of the distinct parts of Spain.

The collection is completed with a Palace of Congresses, a recreation of a Roman Forum and an amphitheatre seating over one thousand visitors.

Palma’s Pueblo Español was a project created by architect Fernando Chueca Goitia, creator of Madrid’s Almudena Cathedral and an extension of the Prado Museum. Between 1965 and 1968, this great work was carried out to convert it into a large open-air museum displaying the country’s diverse architecture, while attracting an emerging tourism industry. Over two thousand individuals participated in the creation of this interesting space which includes distinct styles such as Arabic, Gothic, Baroque and Renaissance. At its inauguration, Chueca described his work as a symbol of ‘the magnificent plurality of Spain. Next to a church, a mosque; next to a Baroque palace, the Alhambra.’

At Palma’s Pueblo Español, you can visit demonstrations of popular customs from distinct regions of Spain, both handicrafts as well as gastronomy. You can travel down the streets of Toledo or across the squares of Seville without ever leaving the island.

In early December, the island’s largest Christmas market is held here. Visitors can stroll through its more than 100 stands, sampling sweets from other nations and the traditional warm Christmas wine from northern Europe.

A trip through Majorca’s Pueblo Español

Of the many buildings and monuments that are reproduced on a small scale in the Pueblo Español of Palma, there are some must-sees, such as the Barrio Andaluz with its narrow streets and white-washed houses that fight against the heat. Along these winding streets, you will find the 17th century Capuchinos Square, boasting the image of Christ of the Lanterns, a work of sculptor Juan Navarro León. Without leaving Andalusia, you will arrive at the marvellous Patio de los Arrayanes, part of Granada’s spectacular Alhambra, with a precise copy of the original inscriptions on its walls. While here in Granada, you can also discover a replica of the Arab baths of the city’s Jewish quarter.

Another must see is the Plaza Mayor. It is trapezoidal in shape and replicates the typical duality of the village squares, serving as commercial and political centres. This collection unites the City Hall of Vergara and the main squares of Navalcarnero and Chinchón, two lovely towns of the community of Madrid.

The architecture of northern Spain is represented by the Plaza Fray Luis de León, where we find such works as the ancient prison of Segovia, where Lope de Vega served time for ‘issues with women’. In the Plaza de Santa María, you can view buildings that are emblematic of distinct points of Spain, such as the current headquarter of the Generalitat of Catalonia, the Munariz Palace of Toledo, the façade of the Church of Santa Catalina of Valencia or the Church of Torralba de Ribota in Zaragoza. You might recognise the fountain in the centre, a replica of the one situated in front of Burgos Cathedral, one of the best Gothic examples in Spain.

Exhibition on the origin of Christopher Columbus

The birthplace of Christopher Columbus is quite a controversial issue, since various cities claim to bear this honour. It is said that the sailor never revealed his place of birth, not even to his own children. The Pueblo Español of Palma offers a permanent exhibition that supports the theory that he was in fact from Majorca, the bastard son of the Prince of Viana and of a young woman from the south-east of the island, and therefore, the brother of Ferdinand the Catholic.

Palma’s Pueblo Español was the most recently created of the three, and it is the only one to have been designed as a tourist attraction.

The Palace of Congresses

A pedestrian bridge connects the Pueblo Español with the Palace of Congresses, constructed in neo-Roman style. It was originally conceived to host large events and it was completed with the reproduction of the Church of Torralba de Ribota (Zaragoza) and the Los Arcos restaurant, in the Plaza Mayor.

Consult fees on the official website. Discounts are offered for students, retired individuals and children. Visitors under the age of 6 can enter free of charge. 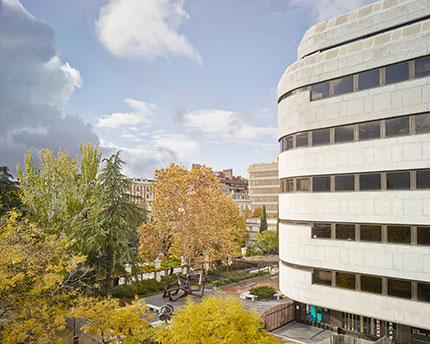