Manacor is 52 kilometres from Palma de Mallorca, i.e. 45 minutes by car or 1 hour by train. Nevertheless, its historic centre and municipality are well worth the trip since this eastern area concentrates unique natural landscapes, such as the Drach Caves and the natural port of Porto Cristo, as well as the innovative museum devoted to the tennis player Rafael Nadal, considered to be the city’s main honorary citizen.

The foundation of Manacor

The first signs of human life in the area date back to around 2000 BC. Later on, the Romans settled there and it is most likely that the current city predates the Moorish domination. However, it was King James II of Aragon who granted Manacor a statute of municipality at the start of the 14th century and, in 1912, it received the title of town as a result of the population explosion during those years.

Manacor is now a prosperous municipality located 12 kilometres from the coast where both locals and people from different countries live together in harmony. The area’s main sightseeing places are set out below.

The Hams Caves and the Drach Caves

Thanks to the island’s calcareous composition, there are spectacular caves conceived as natural cathedrals peppered with stalactites and stalagmites. The main ones are the Drach Caves, with a maximum depth of 25 metres and with one of the largest underground lakes in the world (Lake Martel, where spectators can attend a brief classical music concert), and the nearby Hams Caves, which were the first ones opened to the public in Spain in 1910. The route through the Hams Caves also enables visitors to find out more about the island’s history in a documentary, which is screened in the Blue Cave, and appreciate the magnificence of the stones forming fish hooks (hams in Majorcan) thanks to the modern LED lighting.

The museum, which is officially called the Rafael Nadal Museum Xperience, is much more than a mere tribute to Manacor’s most famous tennis player, who is also considered to be one of the best Spanish athletes of all time. His museum has two large sections: the Experience Room, which has modern simulators so that visitors can test their abilities in different sports such as rowing, hockey and mountain biking; and the Exhibition Room, which shows Nadal’s successful sports career from playing as a child to winning numerous Grand Slams.

One of the main examples of Manacor’s heritage is the Nostra Senyora dels Dolors church, in the heart of the city, which was designed at the end of the 19th century by the engineer José Barceló. Its very high belfry has become one of the most recognisable icons in the Manacor postcards, showing the same neo-Gothic style as the rest of the building. You should also visit the San Vicente Ferrer church, also in the city centre, and admire its Gothic cloister, which has been preserved quite well, despite being used as a telegraph office and prison after the Spanish confiscation. Other musts in the city are the Royal Palace’s tower, the only feature preserved from the residence built during the reign of King James II of Aragon, and the Manacor History Museum, located in the elegant Enagistes tower outside the city and just a few metres from the Rafa Nadal Museum.

Yes, another must in Manacor is its coast since it has 9 beaches and 16 coves. With such a variety, you will logically not know where to set your sights on. That is why we will make it easy for you by suggesting four options:

Where to eat in Manacor

If you want to end your perfect getaway by enjoying typical Majorcan dishes, take advantage of your stay in Manacor by trying out its famous wines and oils, and its star pastry: the suspiros.

Lastly, we will provide a couple of lunch and supper recommendations in the city centre:

Heritage, spectacular caves, signature dishes and unique beaches. As you can see, Manacor has all the ingredients to become one of the musts when visiting the island. 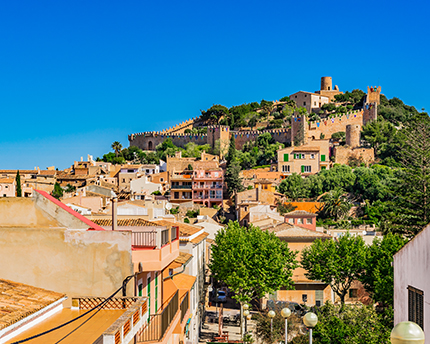