Menorca What to see and doLa Mola, a magnificent fortress next to the port of Mahón 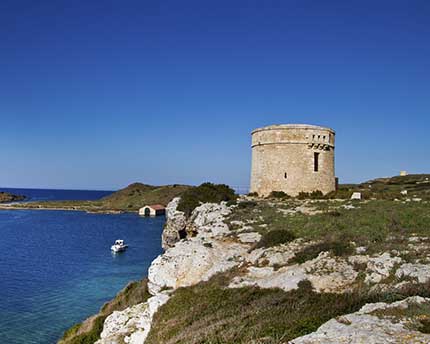 Located at the entrance to the majestic Port of Mahón, La Mola is a peninsula situated on the easternmost tip of Spain that was conceived to defend the port. Its grounds are home to one of the largest nineteenth-century European fortresses, which has been preserved in excellent condition, from where you can admire magnificent views of the port and the island’s coastline, especially at daybreak. What’s more, it is also situated within a natural area that has been declared a Special Area for Protection of Birds and a Community Interest Site to safeguard its protection.

The grounds of La Mola in Minorca are so big that they offer the possibility of enjoying both their defensive monuments, and wealth of nature and incredible landscapes. But if there is one place that really grabs the attention on La Mola peninsula it is indeed the fortress that Queen Isabella II ordered to be built in the mid-nineteenth century in response to British military pressure. Due to its historical importance, walking the length of the walled enclosure and strolling through its natural surroundings is a must, as you’ll be able to discover places of great interest, magnificent viewpoints over the coast, and underground maze-like galleries that fill children with curiosity, in case you’re visiting as a family.

The fortress that Isabella II ordered to be built

What to see in La Mola? In addition to the fortress of Isabella II, we recommend viewing Fronts 9-10, as they were the maritime defence of the mouth of the port. Another must-see is the Mine, an underground labyrinth that housed the gunpowder magazines, stores and casemates that helped defend the Queen’s Gate, which honours Isabella II in the most impressive area of the fortress. Also worth some of your time is The Hornwork, the first line of defence where the main pieces of artillery were situated and whose parade ground now hosts concerts and cultural events. Other attractions within the fortress include The Cutting, the last defensive redoubt, and The Caponier, which served to defend the moat.

Following on from that, you will find Recess 5, a small fort that was designed to be isolated from the main fortress, and the moat, which spans a length of 1,500 metres and surrounds the entire walled front. Other must-visit spaces include the Loopholed Gallery, formed of 48 arches with their corresponding casemates; the Princess Tower, built by the British in 1799 during the third occupation of the island, and the Queen’s Water Cistern, one of the works of engineering that collected rainwater so that the garrison of La Mola didn’t go without.

There are different types of guided tours through the fortified area of La Mola, so that visitors can discover, at leisure, the mysteries that enshroud this large space, whilst taking a pleasant walk through Minorca’s military history. Tours usually last an hour and a half and there are various options. Some of the tours are guided and included in the admission fee. 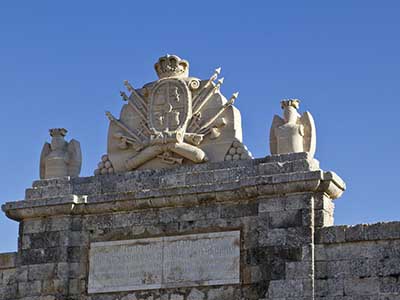 Entrance portico to the fortress

Another option is discovering the impressive, famous 38.1-calibre Vickers Cannon, one of the largest in Spain, which was only in use during the Spanish Civil War. You can visit the inside of the shooting chamber and the underground machine rooms, as well as the munitions store and firing chamber. The meeting point for this tour is the cannon itself, which is around 30 minutes from the reception. Check the official website to see on which days the visits take place.

Would you like to visit La Mola Fortress at night? Well, all you have to do is reserve a place and discover the fortress and its grounds in a completely different way, as the stone takes on a special tone at twilight. What’s more, the galleries become even more mysterious and the temperature is more pleasant. That said, night tours only take place if there is a minimum of 15 people in each group.

Meanwhile, there’s a special tour especially for fans of electric bicycles. The tour covers the fortified area of La Mola and its grounds, crossing through the underground galleries, the fortress moat and former gun batteries leading to the most easterly point of the island, Punta de s’Esperó. Difficulty is low and rates are affordable.

The Buggy Tour takes place on electrical vehicles that are hired by the hour and geared towards small groups of families with children and people with limited mobility—a comfortable way to explore the historic military complex of La Mola. 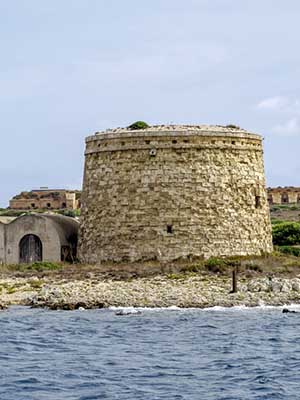 La Mola and its grounds are just a stone’s throw from Mahón and full of viewpoints providing spectacular views of the island, from the mouth of the Port of Mahón to the northern coast and a large part of the eastern coast of Minorca. From the Clot de La Mola viewpoint, you can see a small inlet that allowed boats to drop anchor during the eighteenth and nineteenth centuries. From the Queen’s Gate viewpoint, you can see the remains of San Felipe Castle and the British Tower of Sant Felipet. From the Hornabeque viewpoint, you can see the Port of Mahón and much of the inlet, in addition to the Lazareto (the quarantine fortress). The Vickers Cannon viewpoint is the highest point of La Mola and offers views of a large part of the island. Finally, from the Punta de s’Esperó viewpoint and the lighthouse there are magnificent views of the Mediterranean and Minorca’s coastline.

After your visit, you can always rewards yourself with a bite to eat, a soft drink or an ice cream at La Mola’s bar, situated right on the parade ground of the Hornwork. There is also a shop where you can get a memento from your time at La Mola Fortress.

The sad legend of La Mola

On your visit to La Mola and its grounds you’ll no doubt be told that the fortress of Isabella II served as a prison on various occasions and that some refer to it as the ‘Spanish Alcatraz’. There is also evidence of a massacre that took place on 2 August 1936, which ended the lives of 87 prisoners.

That day the legend of Minorca’s La Mola came to be forged: a ghostly story that scared the conscripts who did their military service at the fortress for many years. Apparently, at night the groans could be heard of the ‘white lady’, a name that referred to Countess Rocamari—the wife of an official from the naval base of Mahón—who was shot on 2 August 1936 and thrown into the sea from the cliffs of Punta de s’Esperó. According to the legend, the woman agonised for three days before eventually dying on the rocks. However, it seems that the sounds the conscripts could hear were actually due to the night song of the shearwaters that nest on the cliffs.

This is just one of the many must-visit attractions in Minorca; discover more monuments and places of interest in Mahón.

By car: From the Port of Mahón take the M3 road towards La Mola and drive for seven kilometres.

By boat: Some companies offer a service from the Port of Mahón or Cales Fonts.

Guided tours: All guided tours must be booked ahead. They take place between June and September in Spanish and English. Check the official website for more information.

Opening hours: La Mola and its grounds are open from June to September every day from 10:00 AM to 8:00 PM and are usually closed from 10 December to 31 January. For the rest of the year, check opening hours.