Menorca What to see and doWhat to see in Binibeca, a charming fishermen’s village 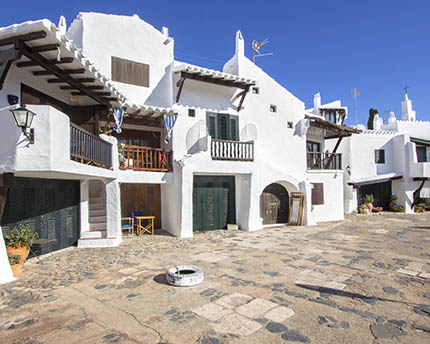 Its well preserved architecture and the immaculate whiteness of its façades are reminiscent of the fishermen’s villages of yesteryear. Simple and remarkably peaceful, Binibeca is now a must-see tourist destination if you’re planning on spending your holidays on the island. However, if you visit, be sure to respect the peace and tranquillity of the village. Let’s see what makes it so special.

Binibeca: the origins of the village

The original idea was to create an idyllic village that could attract intellectuals, bohemians and authors to the area, who would seek and find inspiration in Binibeca. This dream eventually became a reality, with one of the area’s most famous painters, Francesc Poch Romeu, falling in love with Binibeca and depicting it on canvas on numerous occasions. That’s how a group of local developers decided to construct this small coastal village, erecting 165 houses, shops and other premises.

They wanted the village to be built with a uniform architectural style; as such, each house was carefully designed with the same whitewashed façades and wooden balconies. The village’s first house was Casa Candi, with the last houses being completed in the 1970s. All around the village, visitors will find signs reminding them to keep the noise down and to enjoy the town calmly and quietly, respecting the local residents.

That’s how Binibeca was gradually built over time. The truth is that there were no extensive plans or meticulous details. Rather, the village was constructed in accordance with its adaptation to the lay of the land.

In winter, the village becomes something of a ghost town. During this period, the houses are re-painted and maintenance works are undertaken on the gardens and cobblestoned streets. With the arrival of spring and summer, hundreds of curious locals and visitors from further afield come to spend a day in this fabulous location.

What to see in Binibeca 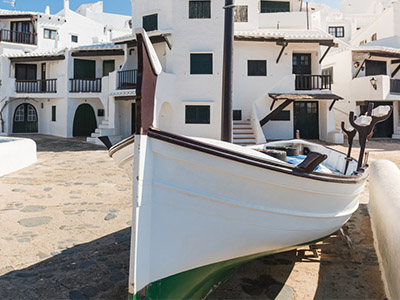 The village is located 8 kilometres outside of Mahón in the south-east of the island. Getting to Binibeca is very simple: all you need to do is take the road heading towards Sant Lluís, turning off at the junction marked Binibèquer Vell (or Binibeca Vell). Despite delighting many people, others are critical of the village for its openness to increased tourism.

However, those who visit Binibeca agree that it’s a brilliantly charming place. Once there, you will love losing yourself in its labyrinthine streets, interspersed with several slopes. You will also marvel at its small whitewashed houses, complete with wooden balconies, each built with a similar structure. That’s Binibeca. A tiny village that is home to barely 200 families, with whitewashed buildings that are reminiscent of houses on Greek islands. If you decide to visit Binibeca, be sure to take a look around its church, the main square and the seaside promenade: three of its biggest attractions, which were also among the first to be built.

To end the day, take a look around its quay, which is small but beautiful. There, you can gaze at boats bobbing on the water as they bathe in the Mediterranean sun.

Where to eat in Binibeca

If you’re planning on paying a visit to this village, we recommend planning well in advance. We suggest making reservations to avoid nasty surprises—especially if you’re coming during high season. At lunchtime, Binibeca has a small selection of quaint bars hidden between its streets, as well as several restaurants. If you’re a fan of Asian food, you will find Bambú Menorca at Paseo Marítimo, 38. This Japanese restaurant has a robata-style grill, combined with other traditional cooking techniques. Not only does this restaurant serve delicious food, but it also offers magnificent views over the sea.

The Restaurante La Caraba is located at the crossing of the Sant Lluís-Binibeca road with Camí de Torret, offering a pleasant terrace and garden area. As far as food is concerned, it serves a highly recommended selection of traditional dishes with fusion twists. If you’re looking to enjoy traditional local Minorcan cuisine, we suggest paying a visit to the El Faro restaurant, which specialises in all kinds of rice dishes (with seafood, squid ink, lobster, etc.). Enjoy some privileged views of the Mediterranean and do not hurry: in this restaurant, time stands still.

Besides getting lost in its streets or climbing to the top of the village and admiring the white roofs set against a backdrop of the Minorcan sea, you can also stop off at one of its beaches or coves. 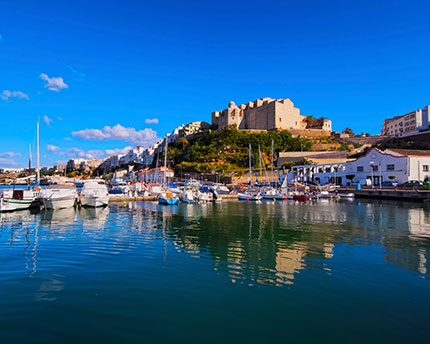