According to the writer Fernando Castillo, “Tangiers is neither Moroccan, nor Spanish, nor Jewish, nor English… It is simply Tangiers”. And he’s right. Tangiers is something else. To help you, we have prepared an itinerary covering the places that you absolutely must see in this diverse city that, at the height of its glory between 1923 and 1960, enjoyed the status of an international city.

Tangiers has as many facets as it has visitors. As well as being one of the great gateways to the Mediterranean, it is a happy, lively, frontier city. It is at once artistic and bohemian, cosmopolitan and sleazy, diverse and contradictory… It is for good reason that it has proved a mecca for great characters, some of them famous and some unknown — including the Rolling Stones, Paul Bowles, Jean Genet, Jack Kerouac, Juan Goytisolo, Carmen Laforet, William Burroughs, and Bernard-Henry Lèvy. All were seduced by the light and magic of a city located only 13 kilometres from the coast of Spain, and whose labyrinthine narrow streets, coastline, monuments and people are a source of fascinating secrets.

If you’re planning to spend a weekend exploring Tangiers, it’s worth stepping up the pace to extract the maximum enjoyment from your sightseeing tour. Of course, the city’s enviable climate means that any time of the year is ideal for a visit to this city of over a million inhabitants, whose streets evoke stories of sultans, and which is, according to Paul Morand, “the most European city of Africa and the most African city of Europe”. A host of surprises and special experiences awaits you. 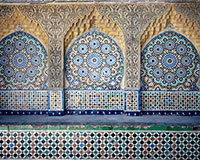 The Kasbah and its museum

Start your visit to Tangiers with a quiet, relaxing stroll in the labyrinth of narrow streets that make up the Kasbah (or walled enclosure of the historic quarter), where you will discover picturesque scenes and houses painted in bright colours — all worthy of being immortalised by your camera. From the Kasbah, you can view the entire city, and admire the finest panoramic vistas of the Strait of Gibraltar. In addition, from one of the gaps in the city walls, you can glimpse the old port of Tangiers. Tangiers’ Kasbah Museum (in Kasbah Square) is perhaps one of the city’s most important public monuments. It occupies the site of the former Government Palace, or Dar el-Makhzen, and is located within the fortified citadel of the Medina, or Kasbah. It is, in short, the sultan’s palace, and its walls hold many secrets, both of the bedroom variety and of others. The last sultan to reside in the palace was Moulay Hafid, who remained there until 1912. You need to look carefully at the hand-carved cupola, which dates from the early eighteenth century, and which still retains remnants of its original paint. Another highlight is the Andalusian-style garden, where some of the trees are over eight hundred years old. Remember that the museum closes at 6.00 p.m. 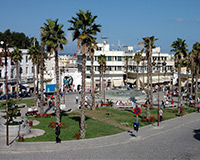 Close to the entrance to Tangiers’ Medina lies this vibrant square, along with the Grand Socco which is almost an extension of the square. The Moroccan capital’s main business hub, this is a good place to get a feeling for the city. The 9 April 1947 Square is edged with palm trees, and takes its name from the date when King Mohammed V visited the city to announce Morocco’s independence. This famous square has attractive terraces and restaurants that lure visitors to sit and enjoy a tea or a snack; it is also home to the old Rif cinema and the Red Mosque. 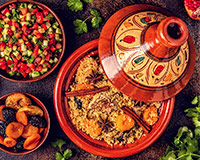 Close to the 9 April Square, at no 2 Rue de la Kasbah, stands this attractive restaurant serving typical Arab cooking. Here, you can also enjoy a glass of wine or a beer. Prices are very reasonable, and occasionally there is live Moroccan music. The establishment’s star dishes are the chicken meatloaf and the lamb cous-cous. 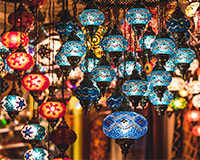 The Petit Socco or Zoco Chico is located inside Tangiers’ Medina. Here you will find an endless array of shops and stalls, offering an assortment of goods, mainly craft items and gifts: traditional footwear, wallets, clothing, spices, bags, etc. You will also see stalls selling fruit, vegetables and other everyday foods, allowing you a glimpse into the daily life of the local people. Enjoy a delicious mint tea in one of the bars around the Grand Socco and the Petit Socco. 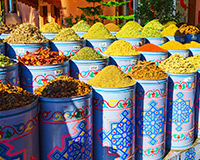 At this market in the heart of the city, hundreds of stallholders display their products, mostly foodstuffs. It is a very lively, colourful scene, so if you like taking photographs, you may like to spend some time here, and get some good snaps of the stalls. 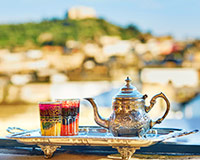 Now it’s time for a break, and what could be better than lunch at Tangiers’ legendary Café Hafa, which has just celebrated the one hundredth anniversary of its opening. Open since 1921, this is one of the places you really should not miss, because here you’ll be following in the footsteps of famous customers including the Rolling Stones, Paul Bowles, Bernard-Henry Lévy, and Juan Goytisolo. Café Hafa comprises several terraces overlooking the Strait of Gibraltar, with Europa Point as its backdrop. It is an unpretentious establishment, with white and indigo blue walls, tile-top tables, and painted earthenware flowerpots. Close by are the Phoenician tombs. Not what it was in its heyday, but Café Hafa is still very much an emblem of Tangiers. 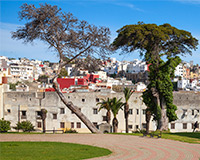 There can be no better place to relax than the beautiful, incredible Mendubia Gardens! This green space exudes peacefulness and tranquility, and is dominated by a great fig tree which is said to be over 800 years old. At the park’s highest point, over 30 bronze cannons are on display to the public. 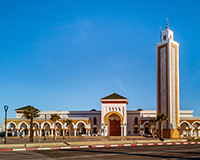 The minaret of Tangiers’ Great Mosque can be seen from everywhere in the city, so it is very easy to find this historic and beautiful place of worship which forms part of the city’s skyline. Originally constructed as a mosque in 1684, it was rebuilt as the Holy Spirit Cathedral during the period of Portuguese rule. The building’s present façade dates from the nineteenth century, and is green (symbolising paradise) and white. The Mosque stands near the viewing point overlooking the port, and affords fantastic views of the Bay of Tangiers and the old port. 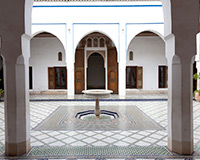 Quite possibly the oldest building in Tangiers’ Medina. The famed Dar Niaba was the first residence of the Sultan Mendub’s ambassador, and was also at one time the French Consulate office. The Renaissance-style building has an imposing main door and a two-storey interior courtyard embellished with carvings of flowers and plants. 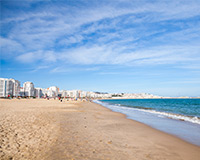 Now it’s time to relax and enjoy the beautiful views of the Atlantic and the Mediterranean afforded by Tangiers’ coastline. The city’s superb beaches tempt visitors to relax and soak up the sun. Even if there’s not enough time for a swim, we can still enjoy a stroll and the beautiful setting. We could go to the lovely, peaceful Plage Municipale [Municipal Beach], and possibly to Plage Malabata, Dalia Beach or Playa Blanca. Each has its own special charm. 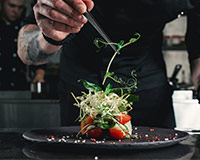 At no. 1 Kashla Kasbah, El Morocco Club is a highly prestigious restaurant where you can enjoy mouthwatering Moroccan cuisine with a contemporary twist. It is well worth treating yourself at the end of your day in Tangiers — and all without having to even leave the Medina. You may like to try the delicious cous-cous, the octopus, or the desserts — all very tempting. A very welcoming establishment, with live music on occasion. 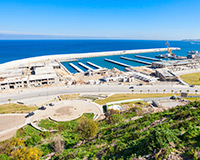 The Port of Tangiers

We start the day drinking in the city’s atmosphere at the port of Tangiers. At every step you will breathe in the aromas of the sea, the souks, spices, perfumes, fish... a plethora of smells signalling that you are in a fishing area. Tourist guides do not always include the port of Tangiers among the city’s attractions, but without the shadow of a doubt, it is well worth taking a stroll here and watching the fishermen go about their tasks. 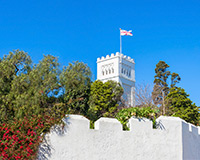 This Anglican church is a unique and somewhat exotic building in Tangiers. It was built on ground gifted by Hassan I of Morocco to the British community in 1880. The church, completed in 1890, is in the Morisco architectural style, and behind the altar there is an area with carvings and quotations from the Quran, pointing the way to Mecca. The chapel was painted by none other than Henri Matisse. Next to the church, there is an interesting cemetery, with the tombs of famous people. 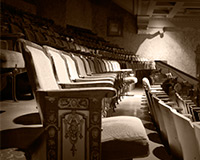 Built in 1913 by the Spanish, this is considered one of northern Africa’s most prestigious theatres.  It stands in Rue Anoual, and is currently closed awaiting a much-needed restoration. Nevertheless, it is still worth having a look at the external façade. 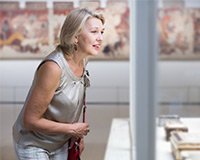 This is a fascinating art museum devoted to the Jewish heritage of one of Tangiers’ oldest synagogues. There are posters, photographs, documents and pieces of art from the 1930s that will throw some light on that period of the history of Tangiers and of Morocco. 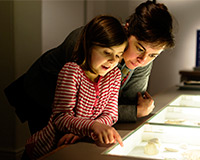 Museum of the American Legacy

History written in capital letters tells us that Morocco was the first nation to recognise the United States as a new country, and even that both countries signed the Moroccan-American Friendship Treaty in 1786. The Legation was the first American-owned edifice to be built outside the United States, and is a Morisco-style stucco structure that was presented to Sultan Moulay Sulliman in 1821. It has been home to the American Legation and the U.S.A. Consulate for 140 years. Nowadays, the building is the Tangiers American Legation Institute for Moroccan Studies, and a venue for occasional modern art exhibitions.

Located in the 9 April Square, close to the Grand Socco, this restaurant offers traditional Arab cuisine, and is the perfect place to relax after a hectic morning’s sightseeing. The food here is cheap, the atmosphere friendly, and the staff speak Spanish. The star dishes are the lamb or chicken tagine, the salad seasoned with lemon, and the vegetable cous-cous. As an aperitif, they offer traditional skewered mini-bites of marinated beef. Occasionally, they install a terrace with views of the mosque. 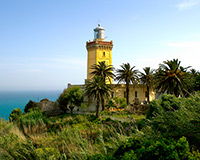 Cape Spartel and the Caves of Hercules

Cape Spartel and the Caves of Hercules are located on the outskirts of Tangiers just 14 kilometres away, and are among the most popular destinations for excursions among travellers who visit the city. Visitors are rewarded with unforgettable views of the Strait of Gibraltar and of the point where the Mediterranean meets the Atlantic Ocean. The Caves of Hercules are steeped in legend and intrigue, and there are signs that they were inhabited as far back as the Neolithic Age. According to myth, the Roman god Hercules slept here on one occasion. You can travel here on the Tangiers tourist bus. 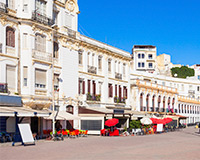 Boulevard Pasteur is the modern city of Tangiers’ main artery. It is home to the Goicoechea building (known as the Accordion Building) and to the iconic Librairie des Colonnes, a magnet for all the European intellectuals who visited Tangiers during the twentieth century. In fact, this library had a personal mailbox for Juan Goytisolo, and Jean Genet used to receive money here sent from his Gallimard publishing house in France. In the vicinity we can also find the Cervantes Institute, the Chaare Raphael synagogue, the Bank of Morocco, the Villa escuela Al Amana once the home of Kaiser Wilhelm II, and the Edificio Casa España.

To put the perfect finishing touch to your weekend break in Tangiers, we recommend a delicious dinner in this attractive Moroccan restaurant which offers traditional, home-made cooking designed to satisfy even the most discerning palates. The restaurant offers excellent value for money, and some regard it as the finest restaurant in Tangiers. Don’t forget to try the lemon chicken tagine, the skewered chicken, and and the vegetable cous-cous.