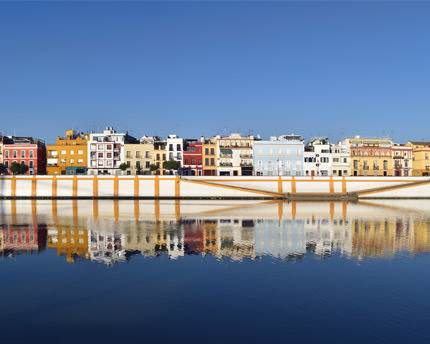 The neighbourhood of Triana, sitting on the eastern shore of the Guadalquivir river, is now one of Seville’s most emblematic and iconic areas. That seems like a paradox when you consider the historic division that has resulted from the river flowing between the two settlements. To give you an idea of the extent of the separation of the two communities, until the current Triana bridge was built in 1852 the only link between the suburb of Triana and Seville proper was a primitive Puente de Barcas [bridge of boats], built on the orders of the Almohad Caliph Abu Yaqub Yusuf in Moorish times. And if we travel a few more centuries back in time, to the age of Roman occupation, there was no physical way of crossing the river. That might be why, even today, the neighbourhood still has a very distinctive identity and character and, everyone who was born here proudly states to be from Triana first, and Seville second.

What’s generally known as the neighbourhood of Triana is the oldest of six neighbourhoods that make up the homonymous district of Seville which has occupied the eastern bank of the Guadalquivir since Roman times. With roughly 50,000 inhabitants, it’s traditionally been home to the working class, the humble abode of sailors and artisans, musicians and bullfighters… Although it isn’t as grand as the nearby Casco Antiguo [Old Quarter] the true pull of Triana is the romantic haze that makes its streets and squares nothing short of enchanting. The area also has a long gipsy tradition. Their presence here since time immemorial explains why Triana is a world-renowned cradle of flamenco. Antonio Canales, Cristina Hoyos, Lole and Manuel, Isabel Pantoja and Remedios Amaya grew up in this suburb, which even has its own style of dance and song, Soleá de Triana.

The Plaza del Altozano, one of the neighbourhood’s hubs, is the first spot you can across after crossing the aforementioned Triana bridge. Here, a sculpture of Juan Belmonte, considered to be the ‘founder of modern bullfighting’, is our first clue to the neighbourhood’s poetic personality: through a hole that pierces the heart of the matador, if you adjust your perspective a bit, you can see the tower of the Giralda in the background. In the same square, you’ll also find the Triana market, a food market which is built on the foundations of the old San Jorge Castle, headquarters of the Inquisition between the fifteenth and eighteenth centuries.

This square gives way to the neighbourhood’s main historical streets. Running along the banks of the Guadalquivir, for example, you’ll find Calle Betis, lined with bars with terraces that offer spectacular views of Seville’s landmarks on the other side of the river. In the opposite direction runs Calle San Jorge, on which you’ll come across the excellent Centro Cerámica Triana (Triana Ceramics Centre), a museum opened in 2014 which teaches visitors about the neighbourhood’s long tradition of pottery making. Or if you’d rather, on the pedestrianised street of San Jacinto you’ll find the majority of Triana’s famous tapas bars, as well as the San Jacinto church which dates from 1676.

Situated on the other bank of the river, the Triana neighbourhood has its own identity, which you will discover by tapas-bar hopping, strolling its streets and getting to know its traditions. 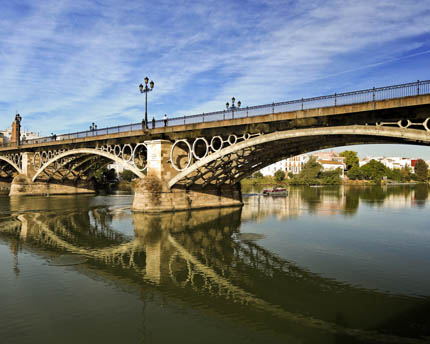 Triana bridge, officially known as Isabel II bridge, connects Seville’s sights and monuments with one of the city’s most authentic and popular neighbourhoods.