Sevilla What to see and doThe Palacio de las Dueñas, discovering the intimate setting of the Casa de Alba 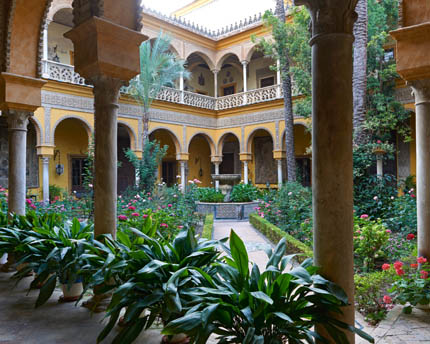 Visitors to Seville have had the opportunity to go and see the Palacio de las Dueñas (a historic residence of the House of Alba) since 2016—the year the palace first opened its doors to the public. For most of her life (and until her death on 20 November 2014), this was the home of the Duchess Cayetana de Alba, the heiress to an aristocratic heritage that pervades every corner of the building. Built between the fifteenth and sixteenth centuries, the Palacio de las Dueñas takes its name from the long vanished monastery of Santa María de las Dueñas, which once occupied the adjoining land. It originally belonged to the Pineda family, the Lords of Casabermeja, who were forced to sell the mansion in order to pay the ransom for Juan de Pineda, who had been captured by the Arabs in the War of Granada. Since 1612, when the sixth Duke of Alba married a daughter of the Ribera family, owners of the estate at that time, the palace has belonged to the House of Alba. Las Dueñas, a combination of Gothic-Mudéjar and Renaissance styles, is of interest not only thanks to its architecture and its splendid patios and gardens, but also because of its art collection—it houses over 1,400 pieces—and for the many historical anecdotes associated with it. The most intriguing of these is the birth of the poet Antonio Machado in 1875.

The palace: 500 years of art and other collected treasures

In 2016, the present (nineteenth) Duke of Alba, heir to Cayetana de Alba, Carlos Fitz-James Stuart, opened the palace, which has been designated an Asset of Cultural Interest, to the public, in order to showcase “the great artistic patronage and conservation work that the House of Alba has undertaken over the centuries”. The palace’s artistic wealth is in evidence from the moment the visitor steps under the neoclassical arch of the main entrance, crowned with a seventeenth-century tile depicting the shield of the Duchy of Alba.

Once inside, and having passed through the famous stables, the edifice’s beautiful main courtyard offers one of the best example of Seville’s Moorish art, thanks to its semicircular arches (embellished with plasterwork dating from the fifteenth century) and its two galleries of segmental arches. The tour takes visitors through several rooms of the palace, including the Salón de la Gitana, which takes its name from the bronze sculpture by the Valencian artist Mariano Benlliure that dominates this ballroom. This space is also adorned with several tapestries from the Flemish workshops of the seventeenth-century Brussels tapestry maker, Jan Frans van den Hecke. Before entering this room, visitors will note the monumental staircase, embellished with pictures of Napoleon III and the Empress Eugénie de Montijo. The staircase leads to the upper floor, which is not included in the tour as it is the winter residence of the current Duke of Alba.

In the Sala de los Carteles can be seen a most interesting collection of Seville’s April Feria and Holy Week posters from the nineteenth century, while the Sala del Tablao, the late Duchess of Alba’s favourite corner of the palace, was where she practised flamenco dance with her teacher Enrique el Cojo. Cayetana de Alba was an avid collector of paintings, and El Tablao is adorned with dozens of them, as well as a flamenco costume and a banner from the Real Betis Balompié Federation of Flamenco Peñas. It is also worth mentioning the Salón Cuadrado, a room graced with exquisite decorative pieces, whose furniture transports the visitor back to France at the time of Louis XV.

The chapel where, until just before her death, the Duchess attended mass every Sunday, is one of the Palace’s artistic gems. Beneath its ceiling of domes adorned with the House of Alba’s coat of arms, the chapel blends Gothic elements—such as the windows—with typical Seville tiled plinths on the walls and the altar. The chapel also contains important works of art such as Santa Catalina entre santos [Saint Catherine surrounded by saints], a fifteenth-century painting by the Renaissance artist Neri de Bicci. Of course, we must not overlook the room leading into the chapel, a veritable art gallery whose walls are hung with a number of sixteenth-century works—as well as a Spanish Baroque masterpiece, La Coronación de Espinas [Crown of Thorns] by José Ribera. On the premises, there can also be found works by renowned classic Italian and Spanish painters of the past 500 years, including Anguissola, Zuloaga, Luca Giordiano, Federico de Madrazo, Sorolla, Gonzalo Bilbao and Romero de Torres.

“My childhood memory is of a courtyard in Seville / and a bright garden where a lemon tree grew”: that famous garden of which Antonio Machado wrote is none other than the Patio del Limonero at the Palacio de Dueñas which the poet knew as a child, as this is where he was born and where he spent the first eight years of his life. In one of life’s great coincidences, during the nineteenth century, partition walls were built in the palace’s rooms in order to convert it into residential apartments, and the estate manager was none other than Antonio Machado Álvarez, the father of the poet who was born in Dueñas in 1875. For this reason, this particular courtyard, along with the main courtyard, is the palace’s most famous, but there are others.

The Patio del Aceite, a former farm building where the harvest and tools were stored and where animals were kept, is now a simple courtyard dominated by a fifteenth-century fountain, and surrounded by palm trees. There is also the beautiful Jardín de la Alberca, with its luxuriant vegetation, including hundred-year-old cypresses, fig, lemon and orange trees. Lastly, we return through the Patio de Santa Justa to the Patio de Acceso [Entrance courtyard], where we can once again appreciate the exterior façade of the palace entirely clothed in bougainvillea.

In fact, the Palacio de las Dueñas could almost be described as a botanical garden, carefully tended by the House of Alba’s gardeners. Its courtyards and gardens are home to over 7,000 plants belonging to 117 different species. The highlights are the building’s façades clothed in different varieties of bougainvillea, jasmine, vine, bignonia, plumbago, wisteria and hibiscus.

So far in our tour of the palace, we have learnt as much from what we have not seen as from what we have seen. That is because these illustrious rooms have hosted—whether for a short stay or a longer period of residence—such famous guests as the Empress Eugénie de Montijo; the politician and English Hispanist Lord Holland; Edward VIII and his brother George VI; Alfonso XIII; Jacqueline Kennedy; Wallis Simpson, the Duchess of Windsor; Grace Kelly and her husband Prince Rainier of Monaco, etc. And now, at last, anyone who wants can see inside this private, aristocratic world which was so jealously guarded for centuries.

How to get to the Palacio de las Dueñas

For further information, we recommend you visit the official website of the Palacio de las Dueñas. 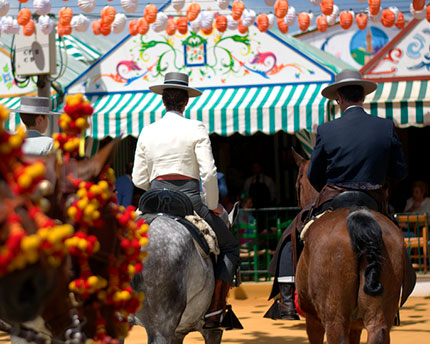