Sevilla What to see and doThe Royal Alcázar of Seville, a jewel within its walls

The Royal Alcázar, a jewel within its walls 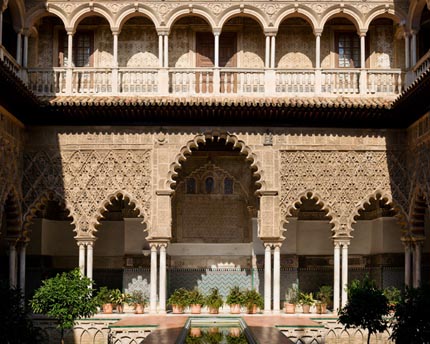 Also known as the Royal Alcázares (since multiple buildings comprise the palace compound), the Royal Alcázar of Seville was one of the great projects of Abd al-Rahman III. This great Arab Emir, who was famous for being the first Umayyad ruler, was also the person behind another architectural marvel: the Medina Azahara in Cordoba. Located in the heart of the city, near the cathedral (link to the corresponding URL) and the Guadalquivir River, Seville’s Alcázar is worth seeing. It is a particularly interesting landmark for art enthusiasts and people interested in learning about the city’s evolution over the course of a thousand years.

The story behind the Alcázar of Seville

Around the second decade of the tenth century, it was decided to build, on a site near the Guadalquivir River and the port of Seville, a government palace in line with the city’s economic and political importance at the time. A second building, the New Abbadid Alcázar, was added the next (eleventh) century to house Seville’s rulers of that era, and it would ultimately become the centre of literary, cultural and social activity.

When Seville was captured by Castilian troops (1248-49), the palace became the seat of municipal power. It underwent a number of renovations and expansions that respected the layout and beauty of the tiling, plasterwork and mocárabe elements that decorated the palace’s interior. The landscaping of its gorgeous gardens was also left untouched. Today, the Royal Alcázar of Seville is a popular landmark and also a royal palace, so it is used by the Spanish royal family and the government for various events.

The entire site has been a UNESCO World Heritage Site since 1987, based on its historical, cultural and artistic value.

Few people know that the Royal Alcázar of Seville is one of the oldest palaces in the world, dating back one thousand years. The main structure consists of several courtyards and buildings that were erected during the Early Middle Ages by Almohad rulers. After the city was taken, these elements were left intact by Castilian rulers, who resided in them until they were seriously damaged by an earthquake in 1356.

At this point, King Pedro I decided to demolish some of these areas and build the Mudéjar Palace, adjacent to other buildings that were constructed in the Gothic era by King Alfonso X ‘the Wise’.

Today, the Mudéjar structures are the most photographed elements of the palace due to their exquisite decorative details filled with plant themes, geometric shapes and bright colours. However, many other features also catch the attention of visitors. Primarily:

The gardens at the Royal Alcázar of Seville

If the palace is striking, then the gardens at the Royal Alcázar of Seville are not to be outdone. Covering approximately 60,000 square metres, these gardens began transforming the surrounding landscape around the thirteenth century. However, most of the grounds we see today are the result of a sixteenth century renovation to implement the Renaissance style of that era. In fact, two starkly different sections can be seen: the Old Gardens, which date back to the Almohad and Mudéjar eras, and the newer gardens from the Renaissance (sixteenth century).

Some of the most noteworthy spots in this enormous park include: