Sevilla What to see and doThe Triana neighbourhood: on the other side of the Guadalquivir

Just 200 metres separate Triana from the centre of Seville and, nevertheless, many local people define themselves as trianeros before sevillanos. This sense of belonging to the neighbourhood is perfectly reflected in the lyrics of Manuel Molina (a member of the group Lole y Manuel, considered one of the great new vanguard of flamenco, together with Paco de Lucía and Camarón), who sang: “Look, I’m a trianero, just being on Calle Sierpes makes me feel like a foreigner”.

Contrary to what one might think after reading such proclamations of love for this former suburb, Triana does not have a wealth of important monuments. What makes it endearing is its people, the atmosphere in its bars and markets and the fact that it is the cradle of great flamenco singers, a bastion of former pottery workshops and establishments where locals enjoy themselves and listen raptly to authentic flamenco.

The Andalusian capital is prone to small rivalries, some of which are friendly and others less so. Examples range from football—Real Betis and Sevilla—brotherhoods—devotees of the Esperanza de Triana and that of La Macarena—and, of course, its neighbourhoods. The devotion that trianeros feel for their streets most likely comes from the fact that, historically, the district was nothing more than an outlying area that didn’t form part of the urban core of Seville and that was actually poorly connected to it.

During the time of the Roman city of Híspalis, it was not deemed favourable to connect the two banks of the Guadalquivir river. It wasn’t until 1171 when the caliph Abu Yaqub Yusuf decided to unite both sides with a precarious bridge composed of 13 boats and a series of boards.

Finally, in the nineteenth century, local authorities took action to resolve the clearly insufficient structure, beginning construction of the Isabel II bridge in 1845. Although it is officially known this way, few locals use the name, referring to it instead as Triana bridge. Its design closely followed the example of the original Pont du Carrousel in Paris, which was demolished in 1930. It inspired the engineers Gustavo Steinacher and Ferdinand Bernadet, who employed wide stone pillars to support the bridge and cast iron from the workshop of the Bonaplata brothers for the rest of the structure. And so, since 1852, the year in which the bridge was completed, Triana has had an effective way to reach the city centre.

What to see in Triana

Where to eat in Triana

Another reason for crossing the Guadalquivir is the food on offer in Triana. In fact, it is possible to try gourmet tapas even before crossing the river at the Lonja del Barranco Market, which is perfect for a vermouth, a coffee or indeed something stronger. Traditionalists cross over to the other side of the river to head to Triana Market, which still serves as a neighbourhood market but with the added bonus of stands where you can sample local produce.

A few metres away from the market is the restaurant María Trifulca, where we recommend going if only to enjoy its views of the La Maestranza Bullring, the Tower of Gold and the Giralda. Of course, its tapas menu, which comes beautifully arranged, is another great reason to head there.

In the heart of Triana, classics include Las Golondrinas, where they serve excellent tapas including grilled mushrooms and tenderloin tips, or Blanca Paloma, which is famous for its croquettes.

The Triana neighbourhood is the place to be, so don’t make the mistake of leaving the Andalusian capital without visiting it! 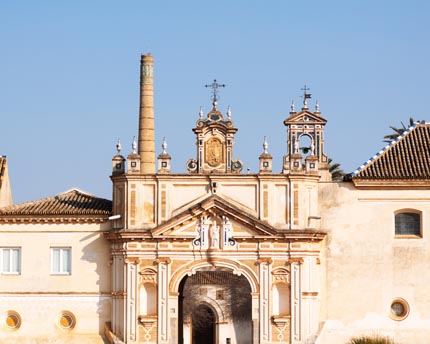