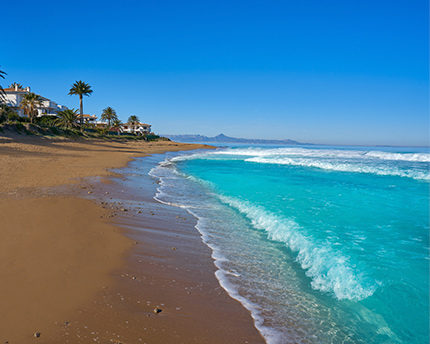 Beaches, mountains, impressive natural landscapes, rivers and towns well worth exploring. All this awaits the visitor to La Marina Alta, Alicante’s most northerly administrative district or comarca. Dénia, its capital, is a good departure point from which to begin a tour along the Costa Blanca, a varied region full of places worth visiting. One of the province’s key tourist destinations, this city boasts 20 kilometres of coastline, with several exceptional beaches, including: Punta del Raset, Les Marines, Les Bovetes, Els Molins, L’Almadrava, Les Deveses, and Les Rotes.

However, Dénia also has a rich cultural and business life. And the visitor is rewarded with an impressive natural feature: the Sierra del Montgó, which separates it from Jávea, and is the location of the Cabo de San Antonio. This imposing massif, which rises to a height of 735 metres, is heaven-sent for hikers. It has been designated a Natural Park, and is also a treat for lovers of flora and fauna. It is home to over 650 plant species, many of them extremely difficult to find elsewhere, or in danger of becoming extinct. It also provides a habitat for over 150 animal species, including the endangered Bonelli eagle.

Any visitor to La Marina Alta who is fond of walking will enjoy the beautiful trail between Dénia and Jávea. It takes around three hours to walk its almost nine kilometres. It is also possible to travel between the two towns by boat. Jávea, the location of the San Martín and La Nao headlands, offers the traveller a genuine flavour of Mediterranean fishing communities.

It has two areas well worth seeing: the seafront and the harbour, known as the Aduanas del Mar [Customs Posts], with the outstanding feature being the Church of our Lady of Loreto, built in an unusual keel shape. There is also the historical town centre, with its whitewashed houses and iron grilles. The focus of the old town is the Gothic church of San Bartolomé, and includes buildings such as the Town Hall, the Provisions Market, the Cultural Centre, the Archaeological and Ethnological Museum, and the Chapel of Santa Ana.

The Arenal beach, the Cove of La Granadella and other, smaller coves such as El Portixol and La Sardinera all attract a large number of visitors to the town. The coast road continues on to the towns of Calpe and Benissa. In Calpe, there awaits the imposing Peñón de Ifach, an emblem of the Costa Blanca. For visitors who would like a dip in the sea, there are several options: the cove of Racó del Corb or the beaches of Puerto Blanco, La Fossa and Cantal Roig.

Benissa too has impressive beaches, including the outstanding Cala La Fustera, which lies among magnificent posidonia meadows. Whilst in this part of La Marina Alta, you really should take a stroll along Calle Puríssima, a typical medieval street steeped in history, with very imposing buildings and monuments. Another worthwhile visit is to the Serra de Bèrnia, a huge natural stone wall that separates La Marina Alta and La Marina Baja. This is the point of departure for a very scenic walking route. You go through a tunnel carved into the stone, which brings you to a spot affording magnificent views of the coastline of the Costa Blanca and of the valleys and mountains of the Mediterranean.

Away from the coast, La Marina Alta offers mountainous landscapes of extraordinary beauty. Along the route are scattered numerous villages and towns of Moorish origin. The majority of these are concentrated in five valleys: Vall del Pop, Vall de Laguart, Vall d’Alcalà, Vall de Gallinera, and Vall d’Ebo. Visitors will stumble across ancient fortifications, town walls and lookout towers. A visit to some of the caves is highly recommended, such as the Cova de les Calaveres on the northern slopes of Monte Segili, in the municipality of Benidoleig. Likewise, the village of Castell de Castells, where the famous cave paintings (the Pinturas Rupestres del Pla de Petracos) are to be found. While craft lovers should definitely not miss Gata de Gorgos.

Among the scenic highlights of La Marina Alta is the Marjal de Pego-Oliva Natural Park, which is shared by the two towns from which it takes its name, on the border between Alicante and Valencia. The Park is a remarkable wetland covering 1,253 hectares, and is located in the centre of the horseshoe shape formed by the Mostalla, Migdia and Segària mountain ranges. Traversed by the Bullent and Vedat rivers in the northern half, and by the river Racons in the south, the Marjal de Pego-Oliva is an area of extraordinary diversity, with its pure water and its beautiful river tributaries and springs.

Alicante’s excellent and diverse beaches are, to a large extent, responsible for the influx of visiting families every summer. Don’t miss its big sandy beaches or charming coves. 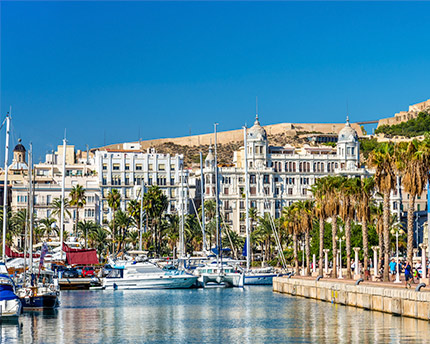 Port of Alicante: a haven on summer nights

The Port of Alicante, situated at the foot of Santa Bárbara Castle, is not only home to restaurants and nightclubs but also a casino and yachting museum. 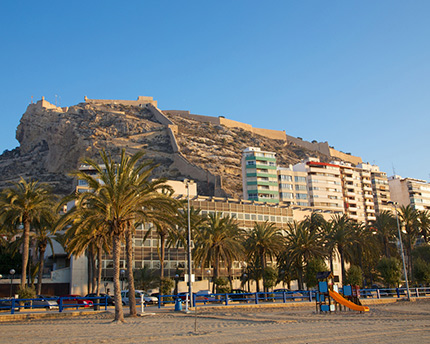 Perched atop the summit of Mount Benacantil in Alicante, the historic castle of Santa Bàrbara has spectacular views of the bay and port