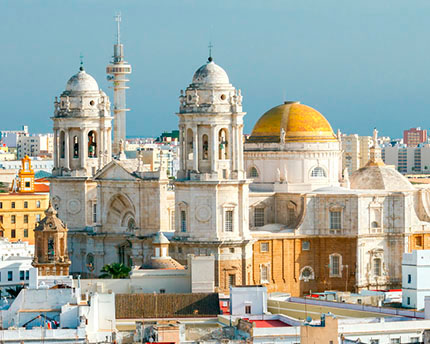 The El Pópulo neighbourhood is the oldest of Cádiz’s neighbourhoods, and in the opinion of many experts, it is in fact the oldest in Europe and therefore in the western world. For around 3,000 years, this area of the city has been constantly occupied, mainly by fishermen and merchants.

Nowadays, El Pópulo, which occupies an area of just over one square kilometre, is one of the smallest neighbourhoods of this city’s centre. Its boundaries are the perimeter of the city walls which enclosed historic Cádiz until the eighteenth and nineteenth centuries.

This is a fact well known to the almost 4,000 residents of this neighbourhood which was sadly neglected for a good part of the twentieth century, but which is now one of the up-and-coming areas of the city, thanks to the regeneration projects undertaken by successive municipal governments.

A truly outstanding example of these initiatives is the Roman Theatre, the first structures of which were unearthed during the 1980s, and which has a somewhat surprising location next to the Cathedral and the Casa del Obispo [Bishop’s Residence]. Beneath the Bishop’s Residence there lies an important Phoenician and Roman archaeological site but, unfortunately, it is closed to the public.

As we have already mentioned, a good proportion of El Pópulo neighbourhood’s boundary matches the outline of the walls that surrounded the historic city of Cádiz in medieval times. In addition to a few stretches of the wall attached to houses, three archways can still be seen; these correspond with the original entrances to the city: La Rosa, Los Blanco and El Pópulo.

El Pópulo was the entrance that had, since ancient times, connected the city with the harbour area of Cádiz. Today it leads into the Plaza de San Juan de Dios, where the Town Hall stands.

El Pópulo can also boast of being home to the old Cádiz Cathedral. This was the Church of Santa Cruz, which was built during the thirteenth century, although the edifice we can see today only dates from the seventeenth century. Its Mannerist-style interior is home to a remarkable formation of columns and stone arches, which support the three naves. This was the seat of the Cathedral Chapter until well into the nineteenth century.

In terms of civil architecture (and with all due respect to the Roman Theatre), El Pópulo neighbourhood’s most outstanding building is the Casa del Almirante [Admiral’s House], which dominates the secluded little square of San Martín. This stately Baroque edifice contrasts strongly with the other houses in the neighbourhood, which are mainly humble, simple dwellings.

The admiral to whom the name of this palace refers was Diego Barrios Soto, on whose orders it was built in the late seventeenth century. For many years, this mansion has been the finest example of the type of grand dwellings inhabited by Cádiz nobles who became wealthy through trade with America.

Far more humble, but no less fascinating from a historical point of view, is the street which bears the name of the hostelry known as Posada del Mesón Nuevo. The hostelry referred to was, in fact, a seventeenth-century inn, the entrance passage of which still remains. Strolling around here, it is easy to imagine the comings and goings of horses and carriages to and from the building.

The El Pópulo neighbourhood also has several charming squares, perfect for having a breather as you stroll around the city. One such square is Fray Félix, which has an unusual shrine in the form of a sentry box: no doubt it was part of the ancient city walls.

Finally, if you visit El Pópulo during the late afternoon or evening, the area has a cultural landmark: the Café Teatro Pay Pay. Over the last few decades, this establishment has transformed itself from being Cádiz’s worst dive (it was once a brothel) into a beacon of alternative culture and one of the historic quarter’s best entertainment venues. 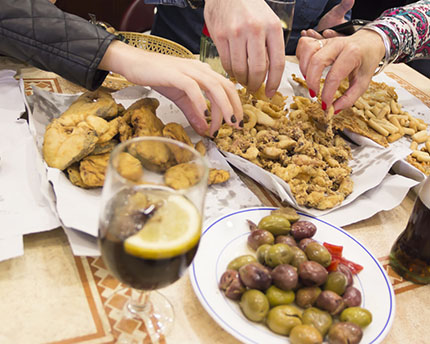 Cádiz’s traditional cuisine is delicious thanks to the assorted ingredients grown in the region and the products available in the nearby ocean. 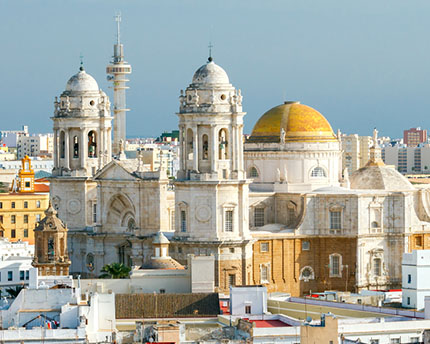 Cádiz Cathedral, built between 1722 and 1832, owes its existence to trade with the Indies and the relocation of the Casa de Contratación.

There is no more entertaining festival than Cádiz Carnival: humour, art, imagination and camaraderie are its hallmarks.