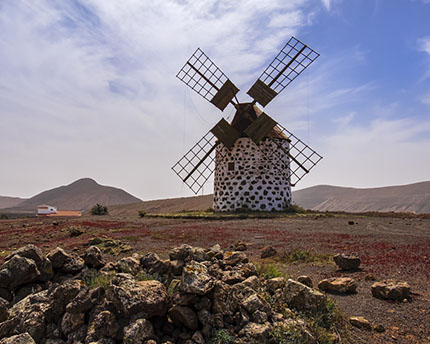 The name of this municipality is a clear indication of its long history. For the town of Antigua’s origins date back to soon after the founding of Betancuria—the old capital of Fuerteventura—in 1404. Back then, the existence of fertile plains in the area which corresponds to the present-day municipality of Antigua, led to the establishment of agriculture. The area quickly developed into an important centre for the production of cereals, and consequently villages and hamlets sprang up there, including Agua de Bueyes, Las Pocetas, Maninubre, and Triquivijate. And Antigua grew to be the most important of them all.

The growth enjoyed by the Antigua area was no doubt helped by its strategic position halfway between the island’s former capital and the ports of Pozo Negro and Caleta de Fuste, which were vital to Fuerteventura’s economy since the island’s main imports and exports passed through them. Thus, during the eighteenth century, Antigua reached its zenith in terms of administrative importance, as it became the most populous and most affluent town in the whole of Fuerteventura.

As far as heritage is concerned, the Church of Our Lady, in the centre of Antigua, is one of the town’s most prestigious buildings. Its construction dates from the mid-sixteenth century (although it has been subject to various remodellings), and it has a rectangular floor plan and a single nave beneath a wooden frame. Its rather modest façade has a rounded archway as its entrance, as well as a bell tower topped with a cupola. Inside the church, the outstanding feature is the altarpiece, dominated by the sculpture of Our Lady of Antigua flanked by images of St John the Baptist and St Joseph.

Also in Antigua, there are three windmills involved in the production of gofio, and open to the public. Gofio is the traditional flour made from grains (mainly wheat and maize) which is fundamental to any understanding of Canary Island cooking. Of these three (in La Corte, Durazno and Antigua), the last is particularly worth a visit, as the complex includes a museum, a cactus garden and a shop selling local craft items.

Another building of historical interest which can be visited in Antigua is the Castillo de Fuste castle, located on the coast in Caleta de Fuste, one of the island’s most tourism-orientated towns which actually now has a greater population than the capital itself. The castle is a defensive tower, built in the eighteenth century by the military engineer Claudio de L’Isle to defend La Caleta—then considered to be one of Fuerteventura’s three most important ports. In addition, the monument stands close to the El Castillo beach; its golden sands are the perfect place to relax, and its waves are among the gentlest on the island.

Finally, the perfect way to round off this tour of the municipality of Antigua is a visit to the Salt Museum (in the coastal town of Salinas del Carmen), to explore the only saltworks still in operation on Fuerteventura. Visitors can learn about the traditional salt-making methods used by the islanders, and they can visit the salt-maker’s house, the salt store and the remains of the old jetty.