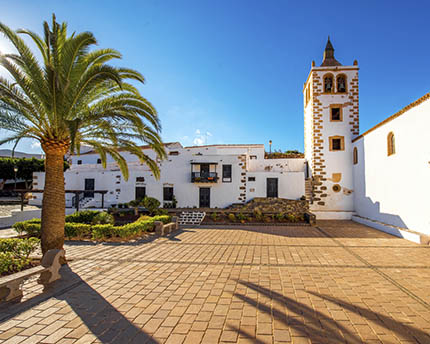 We can claim, without fear of contradiction, that Betancuria is one of Fuerteventura’s best-kept secrets. Although it cannot boast long stretches of fine, sandy beaches like those found on the eastern coast, this small municipality’s historic and artistic heritage, along with its beautiful countryside, make it an essential visit.

Betancuria was originally settled in 1404 by the Norman conqueror Jean de Béthencourt, and became the island’s capital, a position it held until 1834. So, this little town of white houses with wooden balconies and local craft shops was once home to all the institutions that controlled the entire island of Fuerteventura from both an administrative and ecclesiastical point of view.

An example of such an institution is the Church of Santa María, in the centre of the town, which acquired the status of cathedral between 1424 and 1431 or, in other words, for the duration of the bishopric of Betancuria, the first bishopric to be created on the island. Currently it is a main parish church, its outstanding feature being its elegant tower. Like the rest of the building, this is whitewashed; the natural colour of the stone is only visible on specific features, such as around the doorways and windows. The interior is divided into three naves, and displays an interesting and harmonious combination of styles, including Gothic, Renaissance, Mudéjar and Baroque elements.

The town’s other great religious building is the Saint Bonaventure Franciscan monastery, just over five minutes’ walk away. Although it is in ruins—its roof has been completely lost—it is worth going inside to experience the special magic of buildings where one can appreciate the bare beauty of the architectural expression unadorned by sculptures or paintings. Opposite the monastery is the San Diego hermitage, built over a cave where, according to tradition, the Franciscan saint prayed during his stay in Fuerteventura, between 1441 and 1449.

Leaving Betancuria and travelling southwards, it is a ten-minute drive to Vega de Río Palmas, a village where the similarly attractive Nuestra Señora de la Peña [Our Lady of the Rock] hermitage can be found. The building’s claim to fame is that it holds the image of Fuerteventura’s patron saint. The image is a sculpture, barely 23 centimetres high, carved in alabaster which, according to legend, was found by Friar Juan de Santorcaz on the Malpaso ravine. In addition, in this part of the municipality can be found one of Fuerteventura’s most beautiful hiking trails: along the Las Peñitas ravine.

This area of the island has further important historic buildings, such as the Valle de Santa Inés hermitage, located 14 kilometres from the town of Betancuria. Its exterior façade is extremely austere, but inside is an interesting frieze running around the walls of its single nave (which is set beneath a wooden coffered ceiling) and a small, Baroque altarpiece.

Before leaving the municipality, it is worth taking time to contemplate the natural scenery afforded by the Betancuria Rural Park, from one of two viewing points: the Mirador de Guise y Ayose or the Mirador de Morro Velosa; the latter was designed by the Lanzarote artist, César Manrique. The Aguas Verdes natural swimming pools, located on Fuerteventura’s western coast, provide an opportunity to go for a swim close to the Atlantic, as their waters are calmer and warmer than those of the ocean.