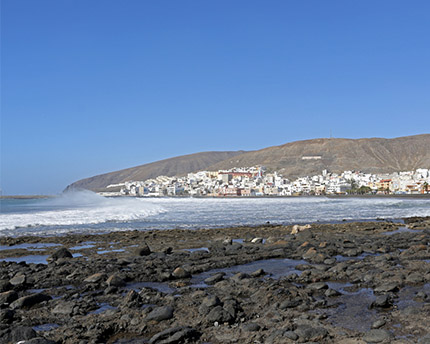 Located in the south-west of Fuerteventura, the district of Tuineje was part of Betancuria until the late eighteenth century, and has witnessed some of the island’s most momentous events, including the famous battle of Tamasite. This took place on 13 October 1740, when the islanders, with fewer fighters and less powerful weapons, repelled a contingent of English invaders with sticks and stones.

Traditionally, the municipality’s economy has been sustained by growing tomatoes and crops for fodder, in addition to a farming sector focused on the production of goat meat and cheese. However, in recent years tourism has sprung up as a third key pillar supporting the area’s economic stability. One piece of evidence for this is the town of Gran Tarajal, a prime example of a tourist resort, which shows a higher rate of urban development than the island’s capital (located further inland in the same municipality).

There, in the town of Tuineje, stands the church of San Miguel Arcángel, an interesting building dating from the early eighteenth century, which in subsequent decades underwent various modifications. One result of these is its unusual floor plan which has two naves. Even more unexpected is the presence of a stone wall next to the entrance; this probably formed part of the old bell tower.

Another fascinating religious edifice is the San Marcos Evangelista hermitage in the village of Tiscamanita, located just five minutes’ drive from Tuineje. This is a very simple construction, whose outstanding feature are the two strange bell-gables flanking the pediment of the main façade. Tiscamanita’s other great attraction is its Windmill Interpretation Centre, where visitors can learn a great deal about the development of windmills from prehistoric times up to the present, and about the techniques used by the islanders to grow cereals and produce gofio, a grain product which forms a basic element of the Canary Islanders’ diet.

Turning our attention to the Tuineje’s coast, the highlight is the town of Gran Tarajal, with its pleasant marina and a kilometre-long beach with fine sand which is, surprisingly, black. The same is true of the attractive beaches at Tarajalejo and Giniginamar, and is due to their volcanic origin.

We will conclude this tour of the municipality of Tuineje at Las Playitas, a quiet fishing village where, naturally, excellent fish is on offer. Six kilometres away from Las Playitas is the Punta La Entallada lighthouse, located in the part of the island that lies closest to the continent of Africa, on a 200-metre-high cliff top. From there, visitors can enjoy panoramic views of the Atlantic and of Cuchillos de Vigán, impressive rock formations whose blade-like appearance has been caused by erosion. If it is possible to fall more deeply in love with the island of Fuerteventura, this is the best place to do it.