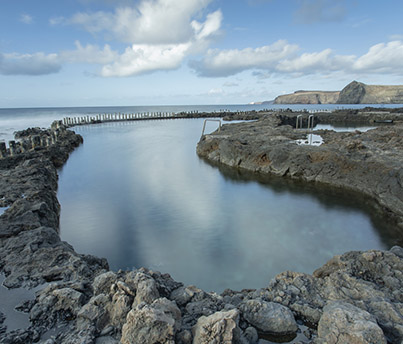 The fact that its beaches are not as spectacular as the ones on the southern coast and, therefore, get far fewer visitors, partly explains why the northern coast of Gran Canaria is not known for being such a great tourist destination. However, it is really worth hiring a car and visiting each and every corner of the northern coast of Gran Canaria (from Las Palmas to Agaete). Find out more about the incredible archaeological remains that have been uncovered there, relax in the charming fishing villages, taste the local produce and take a dip in the sea off tranquil coves or bathe in natural pools. In fact, one of the truly great things about small islands is that you can travel right around them in just a few days, stopping off to see what you are interested in and taking it slowly on the roads. Find out more about what is on offer on the northern coast of Gran Canaria. The distance from east to west is under thirty kilometres.

If you start out in the capital city – Las Palmas de Gran Canaria – don´t miss Vegueta. This neighbourhood was originally the heart of the city and the place where you can find Santa Ana Cathedral plus a number of interesting cultural institutions such as Museo Canario, a museum all about the islands; Casa de Colón where you can learn more about the islands’ historical relationship with the Americas; and CAAM contemporary art centre. There is a charming colonial feel to the streets, which are clearly reminiscent of America whilst retaining a Spanish feel. You can see the sea from some of them. Lively Triana neighbourhood is just metres away. You will find the elegant Gabinete Literario building there and the main street – Calle Mayor – is one of the top shopping areas in the city. Of course, you cannot leave Las Palmas de Gran Canaria without taking a swim off Las Canteras beach, walking along the promenade, enjoying its many restaurants and having a stroll around La Isleta neighbourhood.

You won’t have to travel too far from the city to visit Jardín Botánico Viera y Clavijo, a breathtaking twenty-seven-hectare natural space where you can enjoy a wide range of exotic plants as well as around 500 endemic plants. Arucas is also nearby and it is a place that is famous both for its honey rum factory and the impressive San Juan Bautista Church. This Gothic Revival temple is so incredibly large that the locals call it a cathedral but, in actual fact, it’s just a church.

Cenobio de Valerón is another of those places on the north of the island that you really must not miss. These archaeological remains were listed on Spain’s heritage register in 1978. There are over 300 openings in the wall of an ancient volcano. Many centuries ago, they were used by native Canarians for storing wheat. The other large archaeological site on the northern coast is less than ten kilometres from Cenobio de Valerón. It is called Museo y Parque Arqueológico de la Cueva Pintada and consists of impressive archaeological remains that have been readied so that visitors can enjoy them. Walking along the walkway and looking down on the old native village is a great way to learn about the way of life of the early inhabitants of the island. However, the best thing about the visit is stepping into the cave where you can observe prehistoric paintings that are incredibly valuable from a heritage point of view.

Make coastal town Agaete the last stop on your tour around the north of Gran Canaria. Take a dip on Las Nieves beach or, even better, in Las Salinas natural pools. There are three pools that are all connected to one another by volcanic tubes. They are, without a shadow of a doubt, an ideal place for taking a dip in the sea and enjoying a lovely evening on the island. 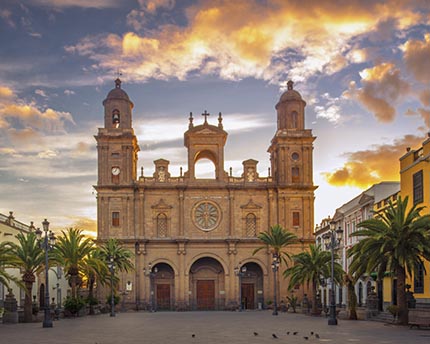 Vegueta is the oldest neighbourhood in Las Palmas de Gran Canaria. Christopher Columbus anchored here on his way to the Americas. 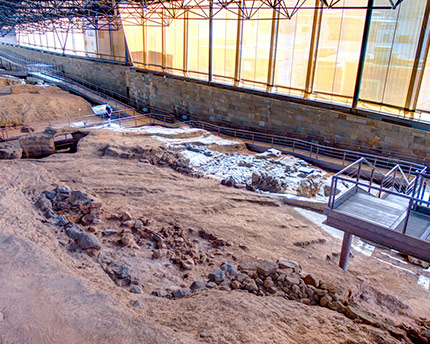 The Painted Cave in Gáldar was home to the former inhabitants of Gran Canaria. Today, it’s one of the most important archaeological sites on the Canary Islands. Make it part of your plans during your island getaway. 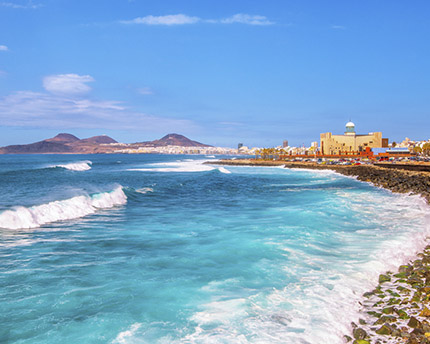 Las Canteras is an urban beach in Las Palmas. With a long promenade and plenty of things to do, it’s one of the main hang-out spots for locals and tourists alike.