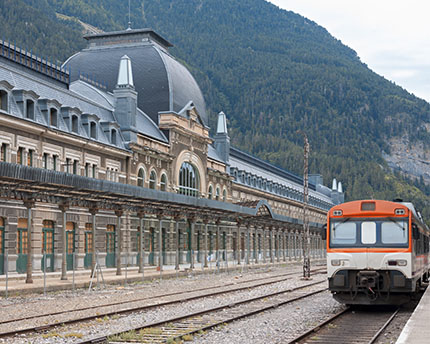 Located in the northwest of Huesca, in the heart of the Aragonese Pyrenees, the region of La Jacetania borders the French border and the community of Navarre. It stands out for its impressive collection of Romanesque churches, as well as for its wide range of mountain plans. It is possible to walk a section of the Aragonese Camino de Santiago and also to ski in two of the oldest ski resorts in the country: Astún and Candanchú.

Its capital, Jaca, gathers more than 70% of the population of the region and houses two must-see monuments. We refer, on the one hand, to its magnificent Citadel, which happens to be one of the best preserved military constructions in Spain. Its pentagonal plan was designed by the Italian engineer Tiburcio Spanochi in response to the designs of Philip II, who, during his mandate, ordered the construction of a series of defensive buildings along the Pyrenees. Built between 1592 and 1670, its excellent state of preservation allows us to visit it and enjoy each of the parts that make up the defensive complex, including the moat, the powder magazines, its five bastions and its sober facade, preceded by a drawbridge that worked thanks to a system of chains and counterweights.

Barely 200 meters from the Citadel is the other great attraction of Jaca: the Cathedral of San Pedro. It is one of the most notable examples of early Spanish Romanesque architecture, famous for the chrismon that adorns the tympanum of its western doorway and for the decoration of the southern apse, where you can see some of the most typical motifs of the Romanesque style of Jaca, such as the balls and checkerboard. In addition, the rooms around the cloister house the Diocesan Art Museum, an institution that houses an impressive collection of Romanesque paintings from some of the most outstanding temples in the region, whose walls were transferred to canvases to prevent their loss.

Romanesque lovers should also visit the monastery of San Juan de la Peña. It is one of the most amazing monastic complexes on the continent due to its unusual location under the monumental rock that gives it its name, which gives the impression that at any moment it could fall over the exposed cloister. Beyond the peculiarity of the enclave, the cloister stands out for its excellent series of historiated capitals with biblical scenes carved by the well-known master of San Juan de la Peña.

Already in the north of the region of La Jacetania, it is worth visiting the village of Ansó to walk through its cobbled streets, as well as to enjoy the scenic spectacle offered by the Hecho Valley. In this valley are the temple of San Pedro de Siresa and the Selva de Oza, an ideal place for trekking or a picnic with the family. Nearby, just five kilometers from the border, stands the iconic Canfranc station, an elegant building of French aesthetics that after experiencing a lethargy of more than four decades (in 1970 the line connecting Canfranc with the French town of Pau ceased to operate) will be converted into accommodation.