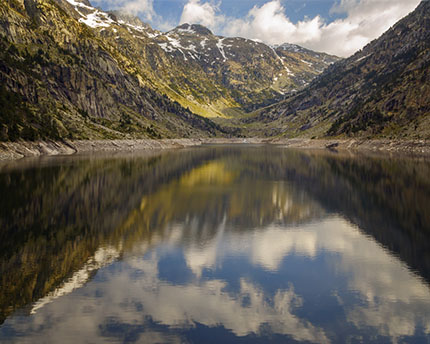 The region of La Ribagorza is located in the extreme northeast of Huesca, bordering the French border and the Catalan province of Lleida. It emerged with its own entity back in the ninth century, in the form of a county dependent on the Counts of Toulouse, and is currently dotted with small villages and hamlets in which its nearly 15,000 inhabitants are distributed.

The low population density does not prevent La Ribagorza from being an important tourist attraction for the area. Its ski resorts, the beautiful landscapes of the natural monument of the Pyrenean Glaciers and the natural park of Posets-Maladeta, as well as the presence of spiritual centers such as the Torreciudad sanctuary or the Vakrayana Dag Shang Kagyü Buddhist Center contribute to this.

To the south of the region are its two “capitals”. We refer to Graus, administrative capital whose old town preserves stately houses of interest and remarkable monuments (such as the Chinchín portal, the colorful Plaza Mayor and the basilica of the Virgen de la Peña); and Benabarre, the cultural capital of the region, where the castle of the Counts of Ribagorza, of Muslim origin and declared of cultural interest, stands out.

In the central strip of the region we also find small towns of great heritage value, such as Roda de Isábena, a beautiful medieval village located at an altitude of 1,052 meters, which, surprisingly, houses an ex-cathedral. It is, in fact, the smallest town in the country with a cathedral. The temple, which was built between the 11th and 12th centuries according to Romanesque canons – although considerable alterations were made in the 18th century – is ornamented with mural paintings and has an atypical uncovered crypt. In addition, in its old refectory, which is entered through the cloister, a restaurant has been installed where you can taste typical dishes of Aragonese gastronomy.

Another of the great attractions of La Ribagorza is the town of Benasque, a tourist attraction par excellence, being the gateway to the valley of the same name, where there is the highest concentration of peaks over 3,000 meters of altitude in the Pyrenees, and to the ski resorts of Cerler and Llanos del Hospital. Beyond its surroundings, the urban center of Benasque has the charm of the mountain villages, while housing beautiful manor houses and buildings as remarkable as the Renaissance palace of the Counts of Ribagorza.

However, you have to head towards the southeast of the region to discover its two most magical corners: the itinerary, not suitable for people with vertigo, of the Montfalcó footbridges and the Finestres Wall, better known as the Aragonese “Chinese Wall”, a geological wonder formed by two limestone rock walls that escort the hermitage of San Vicente and a medieval castle. You can’t miss them!