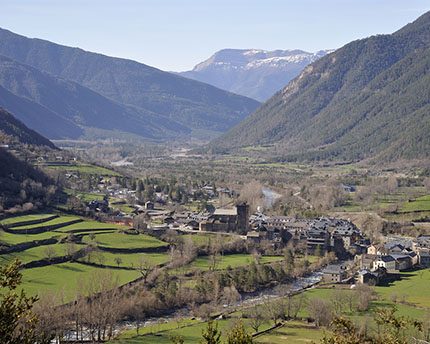 The Sobrarbe region is presented to nature lovers and mountain enthusiasts as a true paradise, demonstrating its natural wealth by the fact that more than 50% of its territory is protected. The National Park of Ordesa and Monte Perdido stands out. But it is not the only one, since the region also includes sectors of the natural park of Posets-Maladeta, the natural park of the Sierra and Canyons of Guara and the national monument of the Pyrenean Glaciers.

The first of these, divided into four sectors (Ordesa, Escuaín, Pineta and Añisclo), was declared a World Heritage Site by UNESCO in 1997 and offers visitors an ever-changing visual spectacle, as the colors of its vegetation change and paint a different landscape as the seasons change.

Although you can also enter the Ordesa y Monte Perdido National Park from the towns of Bielsa, Broto and Fanlo, it is worthwhile to visit Torla-Ordesa, a charming village of only 300 inhabitants located at the foot of the mountain, before or after your visit. Its old town preserves typical houses of Alto Aragon, which were erected between the thirteenth and eighteenth centuries, also highlighting the Romanesque church of San Salvador, the main square and the castle.

The Añisclo Canyon, a breathtaking natural gorge sculpted for centuries by the Bellós River, is another point of interest in the Sobrarbe region, also famous for being one of the best places in the world to observe the bearded vulture, one of the most unique birds on the planet. For those interested, two kilometers from Ainsa there is a feeding place for necrophagous birds -created by the Foundation for the Conservation of the Bearded Vulture- where you can see both bearded vultures and specimens of Egyptian vultures, red kites and griffon vultures.

If we look at the patrimonial side of Sobrarbe, the south of the region has a surprising density of fortresses built between the 10th and 11th centuries to contain enemy incursions. This is the case of the castles of Morcat, Troncedo, Muro de Roda, Morillo de Monclús, Boltaña, Abizanda or Samitier.

However, if we had to visit only one, we recommend heading to Ainsa to enjoy its fortress, which began to be built in the eleventh century, then undergoing various alterations that reach up to the seventeenth century. Declared a historic-artistic site in 1965, its old town is a jewel of the Huesca Pyrenees in which stands its beautiful Plaza Mayor with cobblestone floor and stone facades with balconies overflowing with flowers. If the weather is fine, it is worth taking a seat on one of the terraces located next to the arcades of the square and enjoy a coffee or a beer in such a privileged setting. In one of its corners stands the tower of the church of Santa Maria, a good visual attraction to approach this temple attached to the Aragonese Romanesque that we also recommend peek.