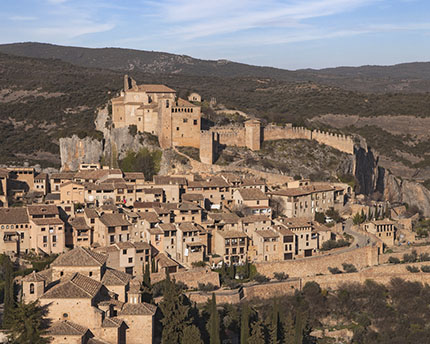 Somontano de Barbastro is located in the heart of Huesca, in a land especially suitable for the production of wine, olive oil and cereals. Established as a region in 2002, its descriptive name refers to the fact that a large part of its territory is located in the foothills of the Pyrenees. Thus, halfway between the mountains and the valley, the region presents a surprising landscape repertoire, ranging from steep ravines sculpted by the water of its rivers to pleasant plains where vineyards spread out.

The epicenter of the region is Barbastro, whose old town boasts good examples of civil and religious architecture. An example of the latter is the cathedral of Nuestra Señora de la Asunción, which highlights its excellent Gothic vault, as well as the altarpiece of the main altar, which was designed by the Valencian sculptor Damián Forment. A short distance from the cathedral is the Diocesan Museum, which is worth entering to see the Romanesque frescoes from Vio and Villamana. Barbastro is also the capital of the Somontano Wine Route, an itinerary that includes more than 30 wineries where you can taste selected wines from the Somontano Protected Designation of Origin, one of the four in the Aragonese region.

The other major attraction of the region is the medieval village of Alquézar, located in the Sierra de Guara along the course of the river Vero. This town, elevated on a hill, is dominated by the collegiate church of Santa María la Mayor, an ancient Islamic fortress converted into a Christian temple after the reconquest of the town by Sancho Ramírez. Declared of cultural interest and historical-artistic site, you can not miss the cloister to appreciate its murals and capitals with biblical scenes.

Precisely from Alquézar starts one of the most beautiful routes of the region. We refer to the excursion along the footbridges of the Vero River, which will allow you, even with children, to advance along the course of the river and appreciate the canyons sculpted by the water in the limestone rock. Another route that is also very attractive is the one that leads to the Chimiachas Deer Shelter, one of the many cave paintings that can be visited along the Rio Vero Cultural Park, declared a World Heritage Site by Unesco for its impressive repertoire of prehistoric art.

It doesn’t end here. In the north of the region Rodellar still awaits you, a small town that has become a reference point for climbers, hikers and lovers of canyoning, being at the same time a privileged place to see eagles, griffon vultures and bearded vultures.

Finally, and in case of visiting Somontano de Barbastro in the middle of summer, we recommend you to visit the salt pools of Naval to experience the sensation of floating in the water, as they have a salinity level higher than that of the Dead Sea itself.