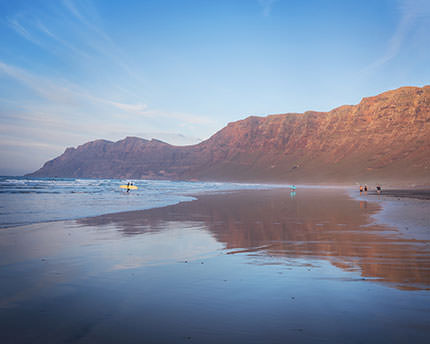 The landscape and historical legacy of the municipality of Haría, located in the north of Lanzarote, is key to understanding the island’s past. It is believed that Roman sailors, interested in its natural resources, fleetingly visited the area, as some amphoras have been found in the strait that separates Lanzarote from La Graciosa. In addition, most of the maja society settlements—the island’s Aboriginal population—are located in Haría, its multitude of archaeological sites are tangible proof of this. Examples include El Mahío, in the open air, the underground volcanic tunnel Cueva de Los Verdes and the numerous rock engravings scattered throughout the Famara Massif.

After the Spanish conquest of Lanzarote in 1492, the municipality of Haría once again served as the nucleus of the predominant population on the island. Its northern location, favourable to the trade winds and with frequent rainfall in summer, made Haría a fertile region from which significant resources could be extracted and exported. For example, there was the ice plant, a plant used for dyes and exploited during the eighteenth century and the cochineal, a strange insect brought from the Americas whose pigmenting properties was used by many 19th-century European industrialists.

It is also known that it was in Haría where volcanic ash from the Timanfaya began to be used for the first time as natural sanding for crops. This, together with the fertility of the lands, allowed agriculture to diversify throughout the municipality, notorious during the 20th century for the proliferation of vineyards, as well as for its cultivation of potatoes, legumes, cereals and vegetables.

Today, with about 5,000 residents distributed around its ten main population centres, the municipality of Haría boasts one of the most heterogeneous landscapes on the island. In an area of one hundred square kilometres, volcanic cones such as La Corona coexist harmoniously with petrified volcanic landforms called malpaís, unusual tree concentrations such as the palm grove of Haría, volcanic caverns such as the Jameos del Agua, impressive lookouts such as Guinate or Haría, and high coastal cliffs like those of Famara.

Its natural and scenic heritage adds to the richness found in its urban landscapes, from which César Manrique drew inspiration for the numerous artistic works he created on the island during the second half of the last century. Not coincidentally, it was in the town of Haría, capital of the municipality, where the artist built the house in which he lived during the last years of his life, and which today can be visited as a house-museum. Other attractions can be found in the nearby town of Yé, with its Mirador del Río viewpoint and its hiking route up the Corona Volcano; in the village of Guinate, with its exotic bird park; in the coves of Arrieta, Punta Mujeres and Órzola; in the nudist village of Charco del Palo, founded by a German businessman in the 70s and in the Chinijo Archipelago comprising the islands of La Graciosa, Montaña Clara, Alegranza and the East and West Roques.

Caleta de Sebo, with its sandy streets, is the departure point from which to explore the island’s spectacular wild beaches and volcanic landscapes.

The lights and shadows of the Cueva de los Verdes create an almost dreamlike universe where the visitor is entranced by the beauty of the rocky shapes and structures.

This work by the Lanzarote-born artist and architect César Manrique represents the culmination of his passion for harmonising Art and Nature. See the view from the Mirador del Río!