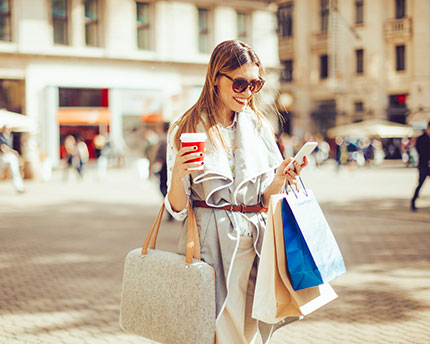 Under the reign of Isabel II, around 1860, Madrid’s expansion plan began to take place, of which perhaps, the most distinct area is the district of Salamanca. Named after the project developer, José de Salamanca y Mayol, Marquess of Salamanca, this network of elegant perpendicular streets was designed for members of Madrid’s aristocracy and high bourgeoisie. Since then, a distinguished atmosphere can be perceived in the neighbourhoods of Recoletos, Goya, Lista and Castellana, where you can still find houses with large gates used for carriages and interior patios, distinctive elements of the Basque architect Lecumberri Gandarias. The glamour of this district ends at Guindalera and Fuente del Berro, two humble neighbourhoods, with an irregular layout, built to accommodate the thousands of workers who arrived in Madrid to build the homes of the rich and other great constructions such as the Gran Vía.

The Salamanca district is known internationally because of its Golden Mile: a fashion point of reference, distributed across Ortega y Gasset Street and the surrounding area, where you can find boutiques from great fashion designers. It is worth window-shopping around its designer clothes, shoes and accessory shops, and admiring its luxury jewellery and watches. Art collectors also have their place in this district, as there are many art galleries and auction houses located along Villanueva Street.

Culture is for everyone, and this area has many highly recommended places to visit. First, the National Archaeological Museum, which reopened in 2014 after a major refurbishment and has thousands of Egyptian, Greek, Roman and Iberian artefacts of great value, including its collection of Ancient Greek vessels, the treasure of Guarrazar—a marvellous example of Visigoth goldsmith’s work—and most importantly, the statue of the Lady of Elche. The second main attraction of the neighbourhood is the Lázaro Galdiano Museum, located in an old mansion house which exhibits the vast artistic legacy of this art critic, who left to the Estate treasures such as the paintings St. John the Baptist in the Wilderness (H. Bosch) and Witches’ Sabbath (F. Goya).

Lovers of contemporary art and chamber music can also find a wide range of temporary exhibitions and concerts at the Juan March Foundation. Those who wish to learn more about the culture of the Netherlands can visit the Carlos de Amberes Foundation, founded in 1594 as a shelter for the pilgrims from this region, which at that time belonged to the Spanish Empire. The institution houses the painting The Martyrdom of St Andrew (P. Rubens). At a cultural level, the district also offers the Wizink Center—formerly known as Sports Palace—, the usual venue for basketball matches and concerts by international artists.

Finally, the district of Salamanca is the centre of Madrid’s avant-garde cuisine, where you will be able to find a variety of Michelin-starred restaurants, such as Ramón Freixa Madrid—winner of two Michelin stars—located at Hotel Único; Zalacaín, which has been committed to traditional haute cuisine since 1973; and the Japanese-Mediterranean Kabuki Wellington. There are many others without Michelin stars but equally appealing, which reinvent international cuisine, such as Peruvian (Virú) and Mexican (Punto MX). We must not forget the gastronomic markets of La Paz and Platea, with a wide range of delicatessen that will delight even the harshest gourmet food critics.