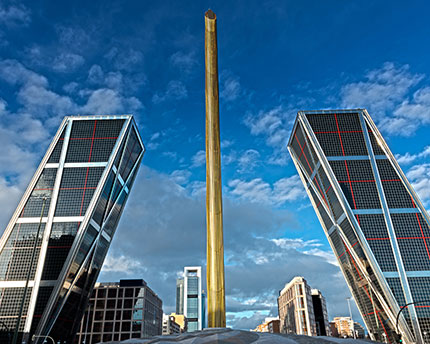 The district of Chamartín, situated in the north of the capital, is made up of six neighbourhoods: El Viso, Prosperidad, Ciudad Jardín, Hispanoamérica, Nueva España and Castilla. Bordered by the district of Fuencarral to the north, Ciudad Linea to the east, Salamanca to the south, and Chamberí and Tetuán to the west, it is today an area with high social status and a large number of businesses.

However, despite the fact that it is now a well-established part of Madrid, the district of Chamartín was once an independent village of a distinctly rural nature. Founded between the eleventh and thirteenth centuries as a resettlement during the Christian Reconquest, it didn’t truly begin to expand until 1561, when the court of Philip II was relocated to Madrid. At the time, Chamartín supplied the neighbouring metropolis with agricultural produce—especially wine—while an influx of newly arrived noblemen, who belonged to the Royal Court, began to build sumptuous estates there thanks to its proximity to the monarchy.

In 1627, King Philip IV decided to sell jurisdictional control of Chamartín to marquess Francisco de Trejo, one of the many noblemen to preside over the land across two centuries. Having been passed from hand to hand, Chamartín began to amass the remains of various palace complexes; and although many of them no longer stand, a fine example from the time still survives at the current Colegio Sagrado Corazón (Calle Marqués de Torroja, 4). As a matter of fact, none other than Napoleon Bonaparte stayed in one of the rooms of this palace on his travels to Madrid during the Peninsular War, as described by Benito Pérez Galdós in one of the novels from his National Episodes collection.

Overwhelmed by the rapid rise of its population, it wasn’t until 1948 when the municipality of Chamartín—officially Chamartín de la Rosa at the time—was annexed to Madrid. Since then, the district has undergone considerable change and modernisation. Key examples include the construction of the Madrid-Chamartín station in 1933 on the site of the former village’s cemetery; the Santiago Bernabéu Stadium, the ground of the football team Real Madrid, built in 1947; and the Cuatro Torres Business Area, whose impressive skyscrapers stand alongside the Paseo de la Castellana.

In fact, the latter seems to be a precursor to the urban megaproject planned for the north of Madrid in the coming years called Madrid Nuevo Norte—previously Operación Chamartín. Under a model of sustainable and responsible urbanism, its main objective is to connect isolated neighbourhoods with Chamartín station, the heart of the project.

In turn, leisure and entertainment has also become another key feature of the district, from cultural highlights such as the National Auditorium of Music, which has an active programme of concerts, and the Museum of Natural Science; to green spaces where you can take a simple stroll, such as the Canal de Isabel II Park and the Berlín Park.

What’s more, there is a wide range of food on offer in the area. The brunch at Pipa&Co (Paseo de la Habana, 105) and the cocktails at Lolita Lounge & Bar (Manuel de Falla, 3)—two of the most modern terraces in Chamartín—contrast with the classic hamburgers served at Tates Pradillo (Calle Nieremberg, 24) or the succulent tapas at the bar El Enfriador (Calle Plaza de Perú, 1).