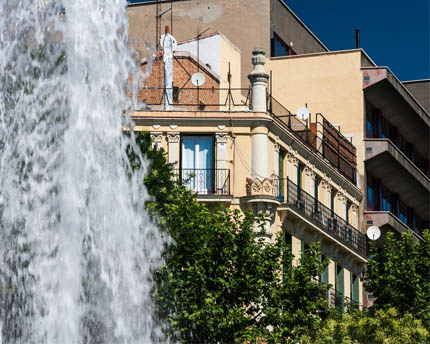 It is paradoxical that the most traditional and stately area of Madrid owes its name, according to most literature, to the French troops who, during the Napoleonic invasion set up camp in what is today the Chamberí square, calling it Chambéry after the Gallic city. Beyond this fact, the central neighbourhood of Chamberí maintains the same elegant and peaceful atmosphere as in the nineteenth and twentieth centuries, when most of the aristocrats and bourgeoisie lived here. It was a mixture of noble streets and buildings, where the traditional neighbourhood life coexisted with embassies, luxurious hotels and avant-garde gastronomy establishments.

The terrain that is currently organised into the six neighbourhoods that form the district—Gaztambide, Arapiles, Trafalgar, Almagro, Ríos Rosas and Vallehermoso—has a curious history: it belonged to the Knights Templar in the Middle Ages, when it was covered in forests and where frequent hunting took place. In the seventeenth century there were many orchards belonging to the Church, nobility, monarchy and landowners, while at the end of the eighteenth century the first factories of tiles, bricks and tapestries emerged. Because of its famous foundries the locals where known as “chisperos” (from the Spanish ‘chispa’, meaning ‘spark’), natural rivals of the “manolos” from the area of Lavapiés.

Chamberí stands out for the architecture of its old mansions of modernist, neo-Gothic and neo-Mudejar styles. Most of these buildings are today occupied by the Swedish, British and Philippines embassies; and important institutions such as the Ombudsman headquarters, the Red Cross’s main office or the Goethe-Institut. If you wish to feel part of the noble class, there is nothing better than a walk around the peaceful—even if it is in the city centre—Zurbano street, considered one of the 12 best in Europe according to The New York Times. Here, in another old mansion is the luxurious Hotel Santo Maura, an oasis in the centre of Madrid where many distinguished guests have stayed.

The neighbourhood has a wide cultural offer, such as the Sorolla Museum located in the house where the postimpressionist painter lived and which is highly recommended to visit not only because of its paintings but due to its idyllic garden. It is also worth visiting the Geomineral Museum and its minerals, stones and fossils located in its grandiose hall. Chamberí also has many theatres and cinemas that are still functioning thanks to its elderly population who have stuck with their old customs. Thus, in addition to the modern theatre complex Teatros del Canal, there are other theatres such as the Teatro La Abadía, Teatro Galileo, and the Teatro Quevedo. The old cinemas, back in the day called Cines Luchana, have also been converted into theatres, whilst others have survived such those belonging to the cinema chains Cines Verdi, Conde Duque and Palafox, which have become some of the capital’s cultural emblems.

Those who wish to go back to the opening of Madrid’s underground in 1919, must visit the Andén Cero (platform zero), Chamberí’s old station closed in 1969, which has been turned into an interpretation centre.

Finally, your visit to Chamberí cannot end without trying its gastronomic offering, reinvented in recent years. Its traditional bars, easy to identify because of their white and blue tiles and steel counters, are more often side by side with avant-garde tapas bars, most of which are located in Ponzano street and around the area of the lovely Plaza de Olavide.