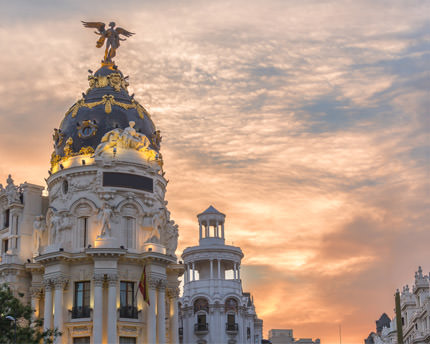 Formed of the neighbourhoods of Palacio, Embajadores, Cortes, Justicia, Universidad and Sol, the Centro district of Madrid is the oldest and most historical of the 21 municipal districts that make up Spain’s capital city. It is also the most multicultural, as 22% of its population of 132,000 inhabitants are foreigners. It’s no wonder, since Madrid has always been the home of immigrants, as the city’s history demonstrates. To really get to know it, one must go back to the origins of the city, to Mayrit—Madrid in Arabic—of the ninth and tenth centuries, which emerged around the fortress of emir Mohamed I, built on the banks of the Manzanares river in order to detect possible Christian attacks. After its reconquest by the latter in the eleventh century, Madrid continued to gain importance as a natural frontier between the north and south of the Iberian Peninsula. So much so that in 1561, King Philip II relocated his court there, which saw Madrid begin to expand beyond its city walls at an unprecedented rate. It was the grandson of the aforementioned monarch, Philip IV, who, in the middle of the seventeenth century, ordered the construction of a new wall—known as the Real Cerca of Philip IV—around the old town, which, despite not standing today, continues to demarcate the Centro district with surprising precision.

With a beguiling street plan formed chiefly of irregular-shaped blocks and narrow streets, the district’s different neighbourhoods are undoubtedly those that have best preserved the authentic, medieval spirit of the city. They are also home to the most important tourist attractions, with such emblematic areas as Puerta del Sol, Plaza de España, Plaza de Cibeles, Paseo del Prado and the Palacio Real, among many others.

Gran Vía—nicknamed Madrid’s Broadway—due to its high number of cinemas and theatres, divides the Centro district in half from east to west, in such a way that the neighbourhoods of Universidad and Justicia lie to the north, and the neighbourhoods of Sol, Cortes and Embajadores lie to the south. That said, if the official names of these neighbourhoods don’t ring any bells, don’t worry, as you’ll surely recognise their more popular names. This is the case for Cortes—or Huertas—a neighbourhood that, before being home to the Congreso de los Diputados, was the cradle of Spain’s Golden Era, as attested to by the numerous statues of writers, such as Calderón de la Barca and Cervantes, that adorn its plazas. These days, in addition to countless nightclubs and bars serving tapas, it is also home to the so-called Golden Triangle of Art, formed of the three most important museums in the city: the Museo del Prado, the Museo Reina Sofía and the Museo Thyssen-Bornemisza.

As far as Justicia and Universidad go, they are commonly known as Chueca and Malasaña respectively. Both neighbourhoods currently showcase a fusion of the old and the modern, which begs to be seen. With a high concentration of bars, bookshops, markets, restaurants and vintage spaces, it is when night falls that their streets become a seething mass of people, much like during the Movida Madrileña in the ‘80s, of which it was the epicentre. Although it is widely known, Chueca is also Madrid’s quintessential gay district, which is why its streets host the acclaimed Gay Pride celebration at the end of June each year.

The case of Embajadores—or Lavapiés—is another question altogether. Often cited to be Madrid’s former Jewish Quarter, today its streets are home to 88 different nationalities. This is demonstrated by the cuisine on offer, the most varied in all of Madrid, with restaurants ranging from Senegalese, Chinese and Dominican to Moroccan or Australian.

Finally, the neighbourhoods of Sol and Palacio, commonly known as Madrid de los Austrias [The Madrid of the Habsburgs], hark back to the city’s more aristocratic side. The former is currently Madrid’s tourist, culture and entertainment centre, with the cinemas, theatres and flamenco venues of Gran Vía, on the one hand, and shopping galore on Calle de Preciados, on the other. In terms of the latter neighbourhood, Palacio—or Palace, its name leaves room for little doubt. The Royal Palace and Plaza de Oriente, on which the Teatro Real [Royal Theatre] stands, constitute a unique attraction, whose historical importance contrasts with the commercial atmosphere of the neighbouring Calle del Arenal, which is replete with shops, restaurants and traditional cafés.

Having borne witness to everything from royal proclamations and celebrations to executions, Madrid’s Plaza Mayor is an emblem of the city, championed by the Habsburg dynasty.

Some of Madrid’s most iconic sights are concentrated in the Puerta del Sol, considered to be the city’s beating heart. It’d be a crime to come to Madrid and not pay it a visit.

It took over 100 years and 6 architects to construct this immense church set in the heart of the city.