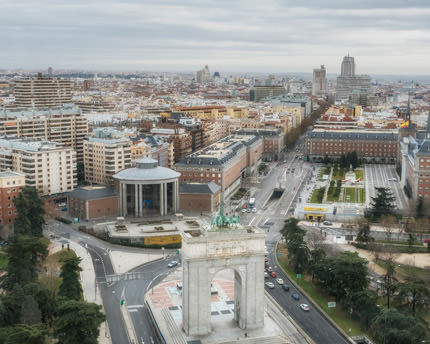 The Moncloa-Aravaca district is the third largest in Madrid and covers the northwestern area of the city, a heterogeneous assortment of seven neighbourhoods distributed on both sides of the M-30. The district was built during the twentieth century on a wooded area belonging to the Royal Household or to the National Heritage with the exception of the old town of Aravaca, which became part of the capital in 1949. The urban hub of the district is located in Argüelles, an area frequented by student due to its proximity to the Ciudad Universitaria, which in 2017 celebrated its 90th anniversary since it was built, having been interrupted by the battles of the Civil War. The southern area is occupied by the Casa de Campo, the lungs of Madrid, and covers an area five times bigger than Central Park. The northwestern side includes Aravaca and the residential areas that have extended the city limits, such as Valdezarza, Valdemarín and El Plantío.

In Argüelles, a neighbourhood of students and middle-high class families, there are some of the most recognizable icons of the district, all of which are accessible from Calle Princesa, one of the main shopping and leisure areas in Madrid. At one end you can find the Plaza de España, presided by the famous Monument to Miguel de Cervantes and at the other end you come across the Arco del Triunfo, built in the 1950’s to commemorate the victory of the Francoist side during the Civil War, the Air Force Headquarters and the Faro de la Moncloa, a 110 metre-high tower with magnificent views of the entire capital (you can go up in a lift). In this area you will also find the highly recommendable Museum of the Americas, the headquarters of the Municipal Board of the district, which stands out because of its pantheon-like building, and the Moncloa interchange station.

If Moncloa-Aravaca stands out for anything, it is for being the greenest district in Madrid. The Parque del Oeste offers a heaven of peace and hundred-year-old trees to be discovered. There is also a nice surprise at the south end of the park: an authentic 2,200 year-old Egyptian temple, the Temple of Debod, a gift from the Egyptian government who wanted to protect it from the threat posed by the construction of the Aswan High Dam. Since 1972 it has been one of the most romantic places to watch the sunset in Madrid. The temple is built on the hill Montaña de Príncipe Pío, where the barrack known as ‘Cuartel de la Montaña’ was built, a focal point of the 1936 military uprising in Madrid and the place of the 2nd May 1808 executions, famously portrayed by Goya.

Further south, the 1,722 hectares of the Casa de Campo are the perfect natural environment to enjoy a walk, running, cycling, its lake (recently refurbished) and its municipal swimming pool in the summer. The park, that was originally a recreational estate bought by Philip II to connect the Royal Palace with the El Pardo hunting grounds, is the location of the Parque de Atracciones—Madrid’s theme park—and aquarium and zoo. A typical attraction is getting to the Casa de Campo flying over the city by cable car, which can be caught at the Parque del Oeste.

Finally, it is worth going for a walk along the banks of the Manzanares River, a very pleasant location after being renovated as a pedestrian and recreational area, and have a drink on one of its terraces while enjoying the only river in Madrid, which Quevedo despised at: “Manzanares, Manzanares, stream apprentice of river”…