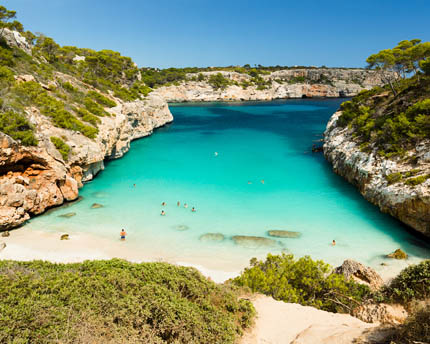 The county of Migjorn, in the south of Majorca, is a plain dotted with forests that extends to the south coast, where you can find some of the best coves on the island. It is made up of five towns – Campos, Felanitx, Llucmajor, Ses Salines and Santanyí – the capital being Llucmajor, the town in which the battle of the same name was fought in 1349, which put an end to the sovereignty of the Kingdom of Majorca. Here, the armies of King James III of Majorca lost against those of Peter IV of Aragon, and Majorca was once again subordinated to the Aragon Crown. Migjorn’s most popular feature is its beautiful coastline, which stretches from El Arenal (to the east) to Portocolom (to the west) offering us beautiful coves with crystalline waters surrounded by pine forests.

We recommend a tour of several coves from the west starting with Cala Marçal, in Portocolom (Felanitx), a beautiful white sand beach that with a length of 150 meters, is one of the largest in the area. Its vastness makes it ideal for fishing and water sports. Further south, in Santanyí, you can find the most secluded cove, Cala Barca Trencada. It is a sand and rock beach that is located under the shade of a pine forest, making it a very pleasant place to spend the day with the family. And just one kilometre away, located in the Mondragó Natural Park, is Cala Mondragó, also declared a Natural Area of Special Interest for Birds, as up to seventy species can be sighted in the area, many of them migratory. It is a beach with very fine white sand, shallow waters and it is surrounded by pine forests that offer pleasant routes. The only downside is that it is usually very crowded.

Moving eastwards, 7 kilometres from Santanyí, the turquoise waters and cliffs flanking Cala Llombards make it one of the most beautiful on the island. Among its attractions is the Es Pontás viewpoint, a rock eroded by waves just a short walk along the coast, and the market that is set up every Saturday at the housing development next to the beach. Nearby is also Caló des Moro beach, a cove wedged and hidden between steep cliffs which, despite this has become very popular and is usually crowded. Our route through the southern coves ends in the farthest cove, Cala en Tugores, still in the town of Santanyí. It is a rocky and sandy beach that can only be reached on foot from the unspoilt Sant Jordi community or the Ses Salines Lighthouse (about 4 kilometres), so it is not very frequented.

Beyond the coast, several parts in the interior of the region are also worth a visit. In Felanitx, you must climb Puig de Sant Salvador, crowned with the Sant Salvador sanctuary (not to be confused with that of Artà, with the same name), a beautiful religious complex that is 510 metres high and is a place of pilgrimage. In the surrounding area you can also find the medieval castle of Santueri, it is perched on the mountain of the same name and is one of the three rock castles on the island. In the town of Campos, the main attractions are the hot springs of Sant Joan de la Font Santa, which were discovered in Roman times, and the Salobrar salt flats, the largest in the Balearic Islands. Finally, 13 kilometres from Llucmajor, you can visit the Talaiotic village of Capocorb, with ruins dating to 1000 BC. 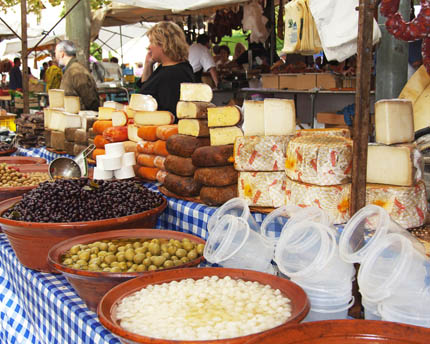 Visiting the markets of Majorca is a good way to get to know the best of Balearic traditions in the form of handicrafts and culinary delights. 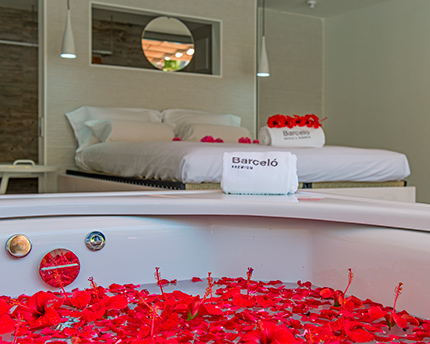 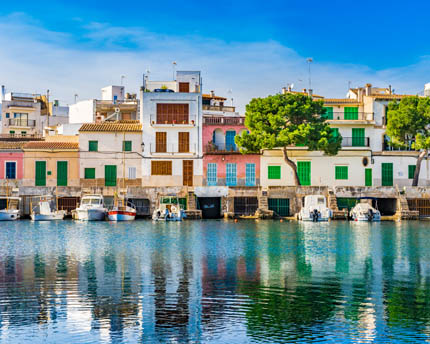