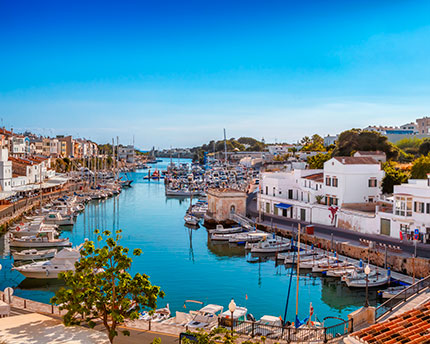 On the island of Minorca a cast of starring roles is divided up among its different municipalities with Ciutadella (whose official name is Ciutadella de Menorca) playing one of the leading parts thanks to its cultural attractions and history. In terms of its number of inhabitants, the municipality is the largest in Minorca, albeit with a population of less than 30,000. According to the 2018 census, it is even larger than Mahón, the capital of the island, although the Island Council, Minorca’s administrative body, is situated in Mahón, whereas the seat of the Bishop of Minorca is in Ciutadella.

Ciutadella (or Ciudadela, in Spanish) is the name of the municipal area, as well as the majestic city, which is its capital. It is situated on the westernmost point of the island, some 50 kilometres from Mahón, and includes 11 urban areas, in addition to the aforementioned city, including Almudaina, Barranch, La Vall, Sant Joan, Santandria, Son Morell, Torre Saura, Torre Trencada, Tres Alquerias and Tudons.

To get to know the area, the best thing to do is to start off by visiting the city of Ciutadella, which boasts an impressive historic quarter replete with churches, palaces and pretty squares. Of particular note are the Gothic cathedral, built in the thirteenth century on the site of a mosque; Sant Nicolau Castle, dating from the eighteenth century; Plaça des Born and Plaça de s’Esplanada, and the small wharf. The Port of Ciutadella is one of the most charming on the island with dozens of docked boats and numerous restaurants awaiting diners eager to sample the region’s delicacies.

Beyond the beautiful city, the best things to do in the municipality of Ciutadella centre on cultural tourism and beaches. The area is home to some of Minorca’s must-see Talayotic archaeological remains. The most well-known include the Naveta des Tudons, which is situated on the road that leads to Mahón. It is believed that these type of stone constructions, which are unique to the island, were used as burial sites.

Although not as well-known, of particular interest is also the village of Son Catlar, which is surrounded by a great wall, and the villages of Torretrencada and Torrefalluda, where various well-preserved taulas and talayots (Bronze Age megaliths), are situated. Finally, another historic sight in Ciutadella is the village of Cala Morell, which is home to a necropolis of caves and a settlement with navetas from the pre-Talayotic period.

An island wouldn’t be an island without its coastline, and Ciutadella boasts one that brightens up the stays of any holidaymaker who visits it. The turquoise waters of the Mediterranean can be enjoyed at small coves alongside residential areas such as Cala Morell, Santandria, Cala Blanca, Cala’n Bosch and Son Xoriguer. Or, you can seek out more unspoilt areas, such as Cala’n Turqueta, Son Saura, Es Talaier, Macarelleta, Macarella, La Vall and El Pilar. 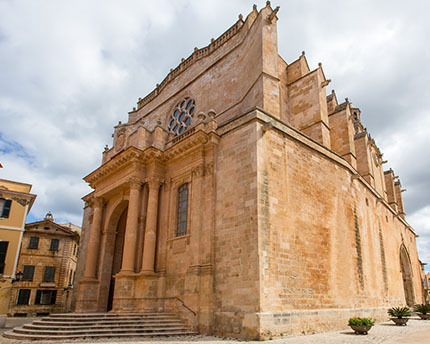 With a great sense of charm and a stately atmosphere, Ciutadella is one of the most attractive places in Minorca. A stroll through the city will make sure you have the holiday of your dreams. 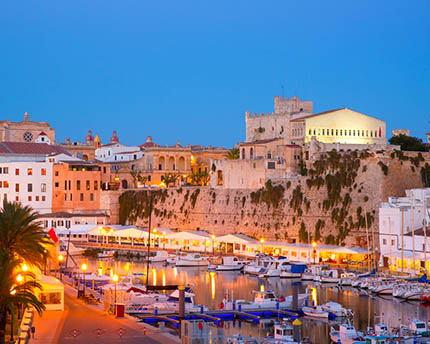 The Ciutadella port: gastronomy and a great atmosphere

Restaurants, luxury yachts and wonderful craft shops—the Ciutadella port is one of the most beautiful and lively harbours in the Mediterranean 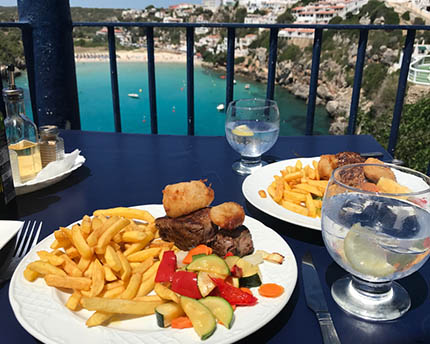 Where to eat in Minorca: from stew to fried fish

There are hundreds of places where to eat in Minorca. Most restaurants serve food with a special emphasis on produce and enhancing the local flavours.