Amara is a pleasant residential area built upon land gradually reclaimed from the River Urumea throughout the 20th century. If you’re not one to conform and aren’t satisfied with visiting the tourist hotspots – they do say, after all, that the best way to really get to know a place is by mixing with the locals – then make sure you head to Amara. This modern neighbourhood doesn’t feature in travel guides and retains something of the true spirit of San Sebastián.

The first attempts to build up this area date back to 1895. The Ensanche de Cortázar residential project was well developed by then, and the city needed further expansion elsewhere. In 1905 the Town Hall approved a project by the engineer Marcelo Sarasola to redirect the river to allow for housing in Amara.

The first buildings in the Ensanche de Amara weren’t constructed until 1947 – much of the land was privately owned, and the municipal engineer has misgivings about the proposed plans. The first stage of the project saw housing built all the way to Plaza de Pío XII, with the second stretching to Calle de los Balleneros. Despite the difficulties, the Ensanche was seen through to completion. The result is a neighbourhood with wide avenues and pleasant green areas, and one that’s worlds apart from the narrow (albeit charming) streets of the old town.

The best way to see Amara is on foot, starting at the Plaza de Easo. Many locals don’t see this square as more than a junction between neighbourhoods, despite it having pretty terraces where you can grab a coffee, sip a vermouth or nibble on some pintxos in the sun. Walk for a few minutes and before long you’ll be on the banks of the river. The delightful Parque de Álava has a children’s play area and a set of sculptures created in honour of Queen Maria Christina, who would bring her court to San Sebastián in summer and in doing so turned the city into the ultimate bourgeois destination.

From the park, take Avenida de Sancho el Sabio (Amara’s main thoroughfare) before continuing along Avenida de Madrid. This will take you to the Ciudad Deportiva de Anoeta, a sports complex including not only the stadium of the local football team Real Sociedad but the Atano III municipal fronton (if you want to watch a game of Basque pelota, this is the place) and the Antonio Elorza velodrome.

Sitting at the other end of the neighbourhood, in the Jardín de la Memoria (Garden of Memory), is the Iglesia de Iesu. This pioneering church was designed by Rafael Moneo, an architect who made a significant contribution to San Sebastián’s new urban environment with his famous and controversial Kursaal Conference Centre and Auditorium.

And to round off your stroll through Amara, head to the pintxo bars on Calle Isabel II and Calle Ballesteros for a taste of some real local fare.

Pintxos in San Sebastián: the essence of Basque cuisine

Going out for pintxos in Donostia-San Sebastián has evolved from a tradition to one of the best culinary experiences the world has to offer. 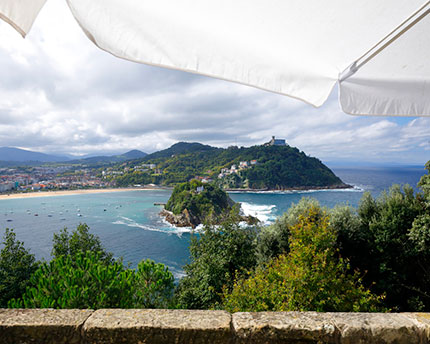 The restaurant scene in Donostia-San Sebastián has conquered culinary experts from across the world. Make sure you sample the local cuisine during your visit to the Gipuzkoan capital. Visit one of San Sebastián’s cider houses to drink in an age-old tradition as you sample some of the best food in the Basque capital.