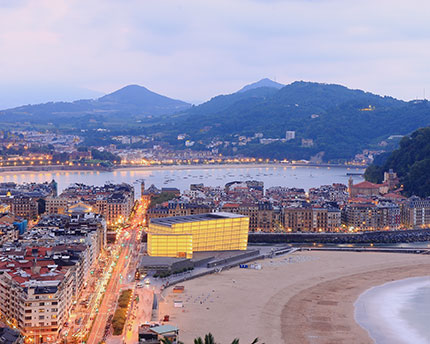 San Sebastián’s Gros neighbourhood stretches from the slopes of Monte Ulía to the mouth of the River Urumea and looks right out over the Cantabrian Sea. The fabulous waves at the spectacular Playa de Zurriola lure in surfers from across the world. Stunning as the beach is though, Gros has much more to offer. Impressive buildings, bars serving the best of Basque cuisine, shops by emerging designers and a flourishing cultural programme are just some reasons why Gros has become such a fashionable part of town.

To reach Gros from the centre of San Sebastián, cross either the Santa Catalina bridge or the Kursaal bridge with its beautiful Art Deco street lights designed by Víctor Arana. Once you reach the east bank of the River Urumea, turn around to contemplate the Hotel María Cristina and Teatro Victoria Eugenia from this side. Both are wonderful vestiges of the city’s aristocratic past.

The riverside Paseo de Ramón María Lili is a good point to stop and admire two other important buildings: the old headquarters of the La Equitativa insurance company (Plaza de Euskadi, 1), built in 1933 in line with the principles of architectural rationalism; and the Kursaal Conference Centre and Auditorium, an iconic cutting-edge work by Rafael Moneo that looks over the beach. The Kursaal is now an indisputable symbol of modern San Sebastián and is the main venue during the International Film Festival held in the city in September. That said, Moneo’s ‘cubes’ weren’t free of controversy, with many considering the aesthetic too groundbreaking for such a unique place.

Playa de Zurriola is one of the venues for the annual Jazz Festival in July. In fact, Gros hosts a raft of cultural events, but beyond film and concerts the beach is also a hotspot for surfers. The entire neighbourhood lives and breathes surf. At every turn you’ll pass surf shops and surf schools offering courses for all levels.

Moving away from the beach, you’ll start to get a better feel for the place. The beating heart of Gros is Plaza Cataluña. Take a leisurely stroll around the wider area to discover boutique shops and some cracking pintxo bars on Calle Peña y Goñi and Calle Zabaleta.

Back at the beach, the Sagüés esplanade at the eastern extreme is the perfect place for watching the surfers and contemplating a beautiful sunset. Art enthusiasts take note: the esplanade is the site of La paloma de la paz (The Dove of Peace), a sculpture by the Basque artist Néstor Basterretxea that stands as a beautiful symbol of non-violence. For incredible panoramic views over the city, finish your tour of Gros by walking up Monte Ulía. The trail is pleasant and the effort really is worth it, despite the sharp climb at the beginning. The views won’t disappoint. 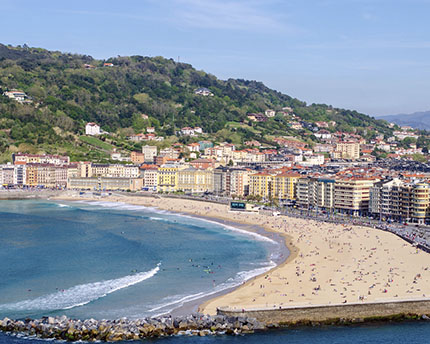 The star of San Sebastián’s Gros district is undoubtedly Zurriola Beach. This part of town has a fantastic array of bars and restaurants too. 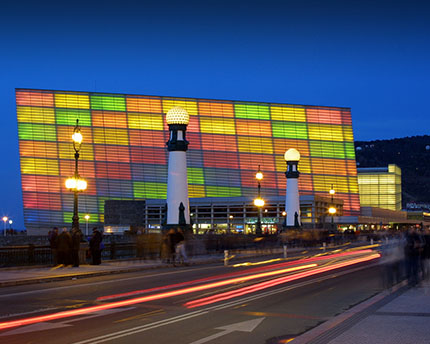 The two striking cubes of the Kursaal building, designed by Rafael Moneo, sit at the mouth of the Urumea River as a symbol of Donostia-San Sebastián.

Visit Monte Ulía for a real experience of nature in the heart of San Sebastián, and an escape from the hustle and bustle.