What to see in San Sebastián in one day

San Sebastián has many faces. In the Parte Vieja, or Old Town, the pintxo reigns supreme, to the delight of both locals and visitors; the beaches of La Concha, Ondarreta and Zurriola, give off a holiday vibe; then there is the film festival, the breathtaking sea views, the aristocratic palaces… plus history, culture, gastronomy, and so much more. It’s not easy to decide what to see in San Sebastián in just one day. However, there are certain places that are must-sees.

Is it possible to see everything? There is a lot to do and very little time, but the city isn’t large, so you can certainly get an idea of its hidden treasures. We suggest you explore the old town and then stroll along the magnificent La Concha beach promenade. You can then tuck into some traditional Basque food in one of the many fantastic restaurants, but you’ll need to leave room for some Basque tapas-style pintxos later on.

Below is a suggested itinerary for a one-day whistle-stop tour.

San Sebastián’s Town Hall is a great starting point for your one-day tour of the city. It is one of the most emblematic buildings in the city. Situated between the beautiful Alderdi Eder gardens and the seafront, the building was a casino in the city’s Belle Époque heyday.

Considered the best urban beach in Europe, La Concha is surely the most beautiful and symbolic place in San Sebastián. The fine, white sands stretch for over a kilometre and change in appearance with the rise and fall of the tide. 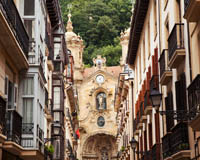 The Parte Vieja, or Old Town, is the beating heart of the city for locals. This is where you’ll find some of the oldest buildings, as well as the bars, restaurants and gastronomy clubs that are so popular with locals and tourists alike. If you’d like to buy some real local food products, make your way to La Bretxa market. Make sure you go through Plaza de la Constitución for a truly authentic feel. 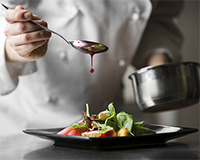 If you are in San Sebastián during the week, try to book a table at the Basque Culinary Center. It’s a little way out of the centre, but the delicious dishes prepared by the budding trainee chefs will ensure you eat very well for very little. Failing that, there are a plethora of fantastic restaurants and traditional cider houses in San Sebastián that will more than suffice. 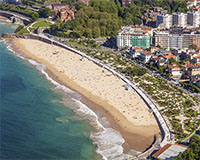 Ondarreta is one of the city’s three magnificent beaches and, possibly, the least busy of them all. It’s perfect for relaxing and enjoying the spectacular views of the bay. You can also walk through the pretty, well-manicured Ondarreta Gardens. 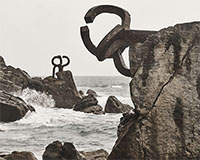 At the end of Ondarreta beach you will find The Comb of the Wind (El Peine del Viento), a set of three sculptures, each weighing nine tonnes, created by Eduardo Chillida to bring nature and art together. It is quite a spectacle on stormy days when the wind whips the waves up and the water is ‘combed’ by the sculptures. 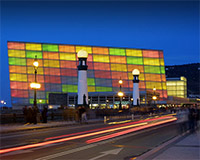 You can’t leave without admiring the Kursaal building – a hub for culture and recreation in San Sebastián. Located at the mouth of the Urumea River, it is a bold and striking architectural complex designed by the architect Rafael Moneo. It boasts two large terraces that afford spectacular views. 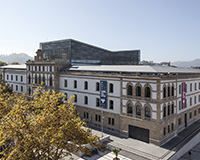 In 2015, San Sebastián’s old tobacco factory was transformed into the International Centre for Contemporary Culture, and is today an emblematic spot in the city. It is worth visiting Tabakalera just to see the interesting building and to take in the amazing views from the Prism on the fifth-floor roof terrace. 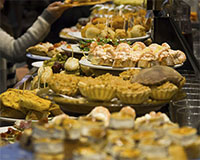 You cannot visit San Sebastián without going for pintxos in the Parte Vieja, or old town. Pintxos have been described as haute cuisine in miniature. Immerse yourself in the local culture by exploring some of the most popular eateries offering these Basque tapas-style bites. Be sure to visit: Borda Berri, Bar Bergara, Txalupa and La Espiga.