In Seville, food takes centre stage. It’s around a glass of Andalusian gazpacho or a plate of cocido (stew) or rabo de toro (oxtail) that friends, colleagues or family ritually gather, and understanding that tradition is vital to understanding the way of life of the Sevillanos. It’s a social relationship that goes hand in hand with an open, light-hearted character, which enjoys the delicious, varied ingredients that are produced both in Seville itself and the neighbouring provinces. Traditional Sevillian food preserves centenary traditions and techniques, but is also opening up to the creativity of new chefs and flavours that have come to the city from the most surprising corners of the planet.

In Seville, people eat out. They share food in the city’s bars and restaurants. So, naturally, that’s the best way to enjoy traditional Sevillian food, whether it’s in the form of dishes or tapas, because going for tapas is, without doubt, the best way of discovering and falling in love with the local cuisine. In classic Sevillian dishes the tastiest vegetables are combined with the freshest fish, shipped in every day from the nearby Andalusian coast. And we can’t forget the cows and pigs that graze on the meadows of Huelva or the Sierra de Sevilla, or the sweet treats that are a legacy of the city’s Muslim heritage.

Andalusian gazpacho: glass or bowl, it doesn’t matter how you eat (or drink!) it. You can enjoy it as a starter as a kind of cold soup, or as a refreshing drink, a great alternative to beer and tinto de verano. Either way, you’re bound to love it. In fact, this clever fusion of flavours from the vegetable patch is one of the traditional Sevillian dishes you just have to try. The recipe seems simple: a blend of five basic vegetables (nicely mature red tomatoes, green and red peppers, cucumber, onion and garlic). But from that point, every chef has their own take on it.

Apart from extra virgin olive oil, salt and vinegar, there are those who add bread, cumin and other spices, and even those who experiment with other vegetables. All of this is done in the name of achieving the two main aims of a good Andalusian gazpacho: to nourish, and refresh. 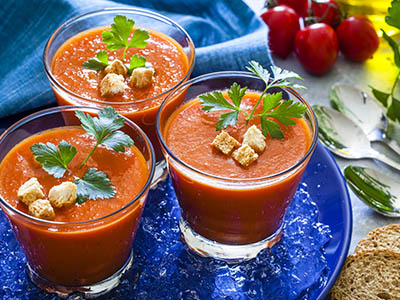 Andalusian cocido for the winter months

Seville isn’t a city that gets especially cold in winter. Even so, on the days when the moisture from the Guadalquivir River seeps into the city’s streets and squares, no one would say no to a good plate of Andalusian cocido. Although the Madrilenian stew might be the best–known version of this combination of meats, vegetables and pulses, the version served up in many Sevillian restaurants and houses holds its own when it comes to flavour and nutritional value. Andalusian stew stands apart in several ways. For example, it includes chickpeas and beans, and the juices aren’t served with the rest of the ingredients—all on the same plate.

The juice of this stew, known as ‘puchero’, don’t go to waste. It tends to be eaten as a broth, flavoured with a dash of sherry from Jerez, or of Montilla-Moriles, or as a soup, accompanied by a few peppermint leaves.

The idea of combining one of the most popular, simple and delicious ingredients out there, the egg, with one of the most defining aspects of Sevillian and Andalusian culture, flamenco, was a brilliant one. The result is huevos a la flamenca, a dish with over a century of history, that’s become one of Seville’s most popular traditional dishes.

There’s no definitive recipe, as every chef makes their own version of this dish, and it might even depend on what’s in the store cupboard at any given time. But the general idea is pretty clear: on an earthenware plate, you place a base of tomato sauce (best if homemade), asparagus, peas, beans and/or other cooked, crunchy vegetables. Then you top it with a couple of raw eggs, a slice of ham and/or a bit of chorizo, and shove it in the oven! But, as we’ve said, there are all kinds of variations on this dish, like swapping the meat out for pancetta. The result is always delicious, thanks to the flavour created by the earthenware and the oven, and the combination of textures of the varied ingredients.

Rabo de toro, a classic that packs a punch

Although it’s associated with Cordoba’s traditional cuisine, rabo de toro (or oxtail) is one of the foods you’ll commonly find in homes and restaurants all over Andalusia. Seville included. What’s more, this Spanish dish has a very long history, as it has its origins in the Roman Empire, although the current recipe dates from the nineteenth century. It’s long cooking time (it takes more than three hours) means that the deepest flavours of all of the ingredients that make up this dish (vegetables and the oxtail itself) are brought out, and this piece of offal turns into a meat with a soft, jelly-like texture, and a really intense flavour.

It’s usually accompanied by chips or boiled potatoes. In restaurants of a certain quality, it’s even served with mashed potatoes with truffle. And, it’s always drizzled in plenty of the cooking juices, which you won’t be able to resist mopping up with a piece of bread.

Fried and marinated fish, from ocean to table

Fried fish is something else that you’ll often see in Seville’s restaurants. The proximity of the ports of Huelva and Cadiz means that fresh fish arrives in the city every day, including anchovies, mullet, pijota and sardines, alongside squid, cuttlefish, and even prawns and lobsters. When all of these are battered in flour and fried in olive oil, they make up a dish that needs to be eaten fresh, when it’s still hot, so you can enjoy the aroma, and the intense flavour of the sea. Of course, this traditional Sevillian dish should be accompanied by a cold beer or glass of dry sherry.

In spring, Seville smells of incense and orange blossom. But it also smells of the honey, wine and cinnamon that flavour the city’s most traditional sweet treats, torrijas, which are associated with lent and Holy Week. But in the bakeries of Seville, the so-called dulces de convento (literally convent sweets), a food with a long history, play a starring role. Examples include the yemas de San Leandro, the tortas de aceite, the cortadillos de cidra (angel’s hair), the pestiños, the roscos de vino, and the tortas de polvorón. Many of them are eaten at Christmas time.