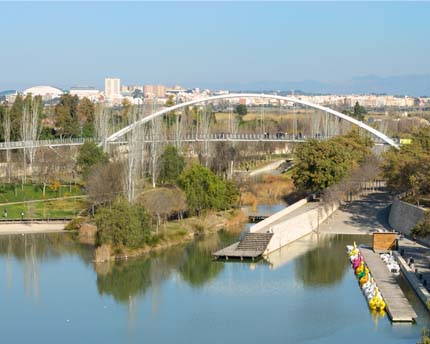 In the north-west of Valencia, there is a place where the hurly-burly of the city and the traffic gives way to tranquillity. It suddenly seems as if we are in a village in the middle of the city, and that is because the Campanar neighbourhood was, for many years, a rural area where life centred on farming. The settlement developed from a number of Muslim farmsteads which King Jaume I presented to the Catalan Gaspar Despallargues, following the conquest of Valencia in 1242. Despite what one might think, the village’s name derives from the Spanish word for field, ‘campo’ (or the Valencian word ‘camp’)—and not from the word for a bell-tower, ‘campanario’, as there was no church there until the church of Nuestra Señora de la Misericordia was built in 1507. In 1596, the church was renamed as parroquia de Nuestra Señora de la Misericordia de Campanar, after an image of the Virgin discovered in the village became a local object of devotion. Opposite the church on the site of a former cemetery, is now the Plaça de l’Església, the central hub of the neighbourhood (which Valencians still refer to as the “old village of Campanar”).

This area is the historical centre of the Campanar district (38,000 inhabitants) which also includes the neighbourhoods of Les Tendetes, El Calvari and Sant Pau, former agricultural hamlets and satellites of the village of Campanar which were swallowed up by the city’s development. The Les Tendetes neighbourhood took its name from the camp close to the ancient wall where merchants arriving at the city would put up their tents to sleep in the open.

Campanar’s history demonstrates that it has always been a town with character. During the fifteenth century, its inhabitants joined the Revolt of the Brotherhoods, spreading the anti-aristocracy uprising throughout the Valencian farming territory. During the seventeenth century, the area came under the civil jurisdiction of Valencia, and became one of its suburbs. The increase in Campanar’s population in the nineteenth century, however, led the residents to apply for it to be constituted as an independent municipality, a request which was granted in 1837. In 1897, Campanar with, at that time, a population of 2,150, was permanently annexed to the city.

During the course of the twentieth century, the appearance of the neighbourhood underwent a drastic change as the farmsteads began to disappear and people opted instead for houses in a Modernist style. Some vestiges of the old style of architecture managed to survive—such as the sixteenth-century Alquería de Nel·lo el Xurro, demolished in 2012 because of its dilapidated condition, despite having been declared an Asset of Local Importance. The fact that no large buildings or houses of greatly varying heights have been constructed has helped to preserve the old-world charm of the centre of Campanar.

The neighbourhood is also well known for its music. Campanar has a thriving youth music band and one of the most important schools of music in the Valencia Autonomous Region, the Aula de Música DIVISI, whose choirs and orchestras have provided a training ground for many professional musicians.