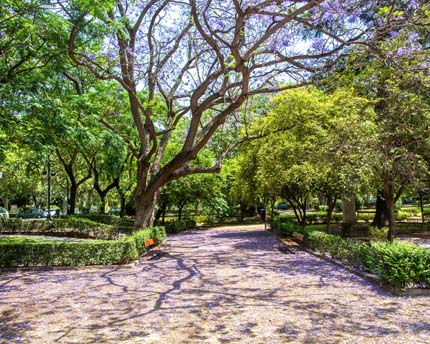 La Saïdia district is opposite the Porta dels Serrans gate on the other side of the Túria river, where suburbs once lay outside the city walls to the north. It inherited its name from the palace that Moorish King Abu Zayd built in this area. Today, La Saïdia has 50,000 inhabitants, making it one of the most densely populated districts in Valencia. It consists of the Marxalenes, Morvedre, Trinitat, Tormos and Sant Antoni neighbourhoods. The area connects to the Ciutat Vella [Old Quarter] via some of the oldest bridges in the city: Serranos, Trinitat, San José and Fuste (which was rebuilt to allow for traffic).

The Marxalanes neighbourhood was named after the marshes that used to form in this depression next to the Túria and was traditionally home to several convents. For example, the female convent of Gratia Dei (or La Saïdia convent) could be found on the site where the ancient palace of King Zayd once stood; the convent remained here until the 1960s when it moved to Benaguacil. There was also a Carthusian monastery here in the fifteenth century and an Augustinian nuns’ convent, Nuestra Señora de la Esperanza, which disappeared at the beginning of the nineteenth century. The land here is damp and for a long time it suffered from the rising tides of the Túria river, something that is well remembered by those who lived through the great flood that struck in the autumn of 1957; the neighbourhood was severely damaged and a hundred people lost their lives. The tragedy led to the course of the river being diverted and this was when the old course that ran through the city was turned into gardens. The area has seen great modernisation over the past 20 years and also enjoys the use of another green space: the delightful Parc Marxalanes. This park opened in 2001 and includes several refurbished farmhouses, the first metropolitan railway station in Valencia (today a retirement home) and an old oil factory.

One of the most interesting places in the district is the monastery Monestir de la Trinitat in the neighbourhood of the same name. This Gothic building was founded as a Trinitarian convent and hospital in 1242, four years after the Christians conquered the city. It was used by Saint Clare nuns from 1444 on the express wishes of queen Marie of Castille, wife of Alfonso the Magnanimous, who wanted a retreat in Valencia and is buried here. The last Saint Clare nuns left the convent in 2014 due to a lack of new vocations. The Trinitat neighbourhood has two other important tourist attractions: the Museu de Belles Arts de València, the most important art gallery in the city with a prestigious collection of fourteenth- and fifteenth-century Gothic paintings; and the Jardins del Real park, named after the Palau del Real, a royal residence used by kings and dynasties throughout history which stood here until 1810. The origins of this beautiful park can be traced back to an eleventh-century Moorish estate that the kings of the Taifa of Valencia used as a rural retreat.

Moving away from the course of the Túria river, we reach the Sant Antoni neighbourhood, named after its local church of Sant Antoni Abat. The church is the focus point of a tradition whose roots have been lost in the mists of time. On 17 January, the saint day of Saint Anthony the Abbot (Spain’s patron saint of animals), thousands of people bring their pets to Carrer Sagunto and neighbouring streets to have them blessed.