What to see in Valencia in 2 days

Valencia is able to easily captivate travellers with its wide range of attractions, including a vast array of cultural and nature-related activities, a great cuisine, and a generous helping of the avant-garde. The most surprising thing about the city’s monuments is the mix of traditional and contemporary architecture, with beautiful Gothic edifices coexisting with futuristic shapes such as the Ciutat de les Arts i les Ciències. The best way to capture the vibe of Valencia is to meander through the neighbourhoods of El Carmen and Ruzafa, and to take in the aromas and colours of the products on display in such markets as the Central Market.

This city on the banks of the river Túria also has dozens of museums, some of which should definitely not be missed, including the Museum of Fine Arts and the IVAM [Valencia Institute of Modern Art], as well as others, like the Museo Fallero [The Falles Museum], which are chock-full of fascinating exhibits. Families should make a bee-line for the Oceanogràfic, which is considered to be the largest aquarium in Europe, and for the Bioparc, where they will find an impressive selection of African wildlife.

As you are about to find out, a two-day itinerary in Valencia can be most rewarding. 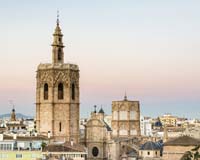 Despite its Gothic appearance, the Cathedral was built on the site of a Roman temple, and was also once a mosque. Inside can be found treasures such as the Holy Chalice, and the High Altar with its Renaissance frescoes. Be sure to go up the Micalet bell tower to enjoy the views from the top. 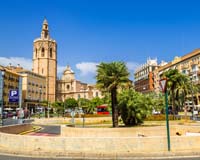 This square is considered to be the heart of the historic quarter, and it is worth taking the time to appreciate its historic buildings (including the Cathedral), to do some shopping in the open-air markets or to sip an horchata [typical cool, sweet drink made from tiger nuts] on one of its terraces. 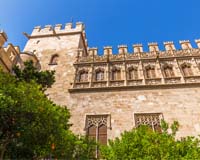 Designated a World Heritage Site by UNESCO, this is one of Europe’s finest examples of Gothic civic architecture. Its splendour is testament to the business bonanza experienced by Valencia around the fifteenth and sixteenth centuries. Don’t forget to visit the Saló Columnari [Columned Room], its garden and the orange-tree patio. 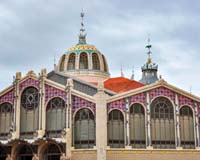 This magnificent Modernist market, with its characteristic wrought iron architecture capped with a stained-glass dome, is considered to be the largest fresh produce market in Europe. Stroll among its 1,200-plus stalls displaying local produce, and immerse yourself in the flavours of the Mediterranean.

This traditional bar is located in the Mercat Central, and is now run by the well-known Valencian chef, Ricard Camarena. Seize the opportunity to sample typical Valencian tapas, and you can then continue on your way without losing too much time. 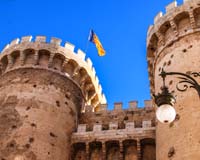 What nowadays look to us like a gate are the towers built by Pere Bonfill, who took his inspiration from the Castel Nuovo in Naples. This late-Gothic structure had a military function, as they were conceived as a defence for the city. It was also used as a women’s prison. 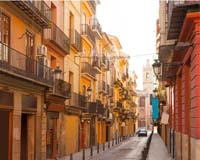 Once a walled neighbourhood, the Barrio del Carmen is located within the city’s historic district. Amble through its narrow streets, enjoy the Bohemian atmosphere of its squares, and visit one of its most iconic museums, such as the IVAM [Museum of Modern Art] or the MUVIM (Museum of Illustration and Modernity].

The Serrans Towers formed part of the city’s defensive system during the fourteenth century but were rendered obsolete in 1865, when the city walls were demolished. They were used as a prison for members of the aristocracy between the sixteenth and nineteenth centuries. The interior of this Gothic construction is open to visitors during the mornings. 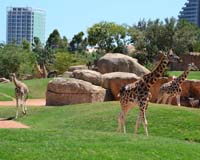 Located close to what was once the bed of the river Túria, the zoo covers an area of 100,000 m2, within which African ecosystem is replicated. The boundaries are almost invisible in this innovative zoo, totally immersing the visitors in the animals’ habitat. 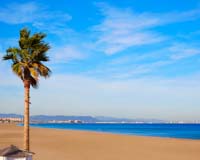 The best way to end the day is watching the sun go down from one of Valencia’s beaches. Valencians’ favourite urban beach is Platja de la Malva-rosa, a lively area where, in addition to paddling in the sea, you can also have something to eat and drink on one of the terraces. 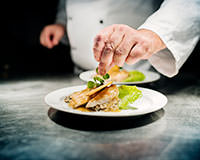 This establishment is a branch of Quique Dacosta’s restaurant in Dénia. We can particularly recommend the tasting menu, which enables you to try out a wide variety of dishes by chef Luis Valls, who trained with Dacosta. 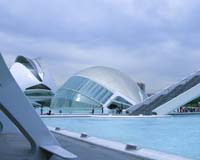 This complex, which bears the signature of Santiago Calatrava, has become Valencia’s star attraction. It extends for about 2 km over what was once the bed of the river Túria, and it comprises, amongst others, the Hemisfèric, the Science Museum, and the Oceanogràfic. 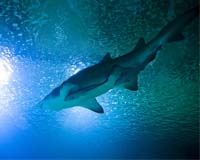 The largest aquarium in Europe replicates the most important ecosystems of all the world’s seas and oceans. In the different buildings that make up the complex, visitors can see the typical marine fauna of the Mediterranean, the Antarctic, the Arctic, and the Red Sea, etc. 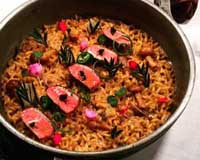 Quality ingredients, tradition and passion are the three elements that define this elegant restaurant located in Hotel Barceló Valencia. Its à la carte menu hits a perfect balance between the traditional flavours of the Mediterranean and the modern vibe of the local area. 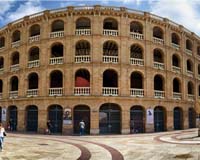 This Neo-classical building, dating from the mid-nineteenth century, is the work of the architect Sebastián Monleón Estellés. From the outside, you can see that it has 4 arcaded floors, brick archways and stone balustrades. The most famous bullfights are held during the festival of Las Fallas and the Feria. 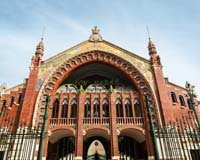 We owe this beautiful Modernist building, which has been designated a National Monument, to the architect Francisco Mora Berenguer. It started out as a food market, but nowadays it includes flower stalls and excellent restaurants. This is a perfect place in Ruzafa to barhop for tapas. 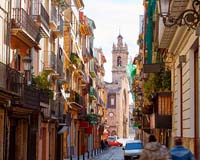 This once-forgotten neighbourhood in the Eixample district has gained a new lease of life in recent years, and a pleasant cultural ambience now permeates it. It is a pleasure to visit the colourful Ruzafa Market, to go shopping in its historic shops and to eat in the most trail-blazing restaurants. 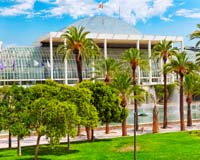 Consult the programme of festivals and concerts in this great auditorium located close to what was once the Túria riverbed. The building, constructed in 1987, is the work of the architect José María García de Paredes, although the 2003 extension was designed by Eduardo de Miguel. 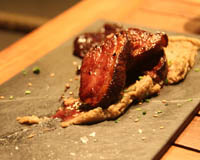 This modern establishment—part of the Quique Dacosta empire, and headed by Adrián Sánchez—offers set menus of delicious tapas, or you can select from the extensive à la carte menu, where traditional cuisine is given an added, creative touch.