A tour of Tenerife’s best natural swimming pools (or charcos) 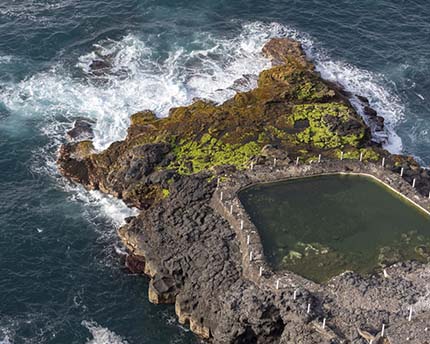 When it comes to seaside leisure activities, what Tenerife offers is broader and more adventurous than the norm. Accustomed as we are to coastal holiday destinations’ classic beach offer (or water parks, in the absence of a beach), the Canary Island archipelago presents a novel alternative: swimming in the natural swimming pools—or charcos, as they are known in the Canary Islands—dotted around the coastline. These pools give us the chance to delve into the volcanic origins of the islands, if we bear in mind that all these little pools in the rock were produced, at some point in history, by volcanic lava coming into contact with the ocean. A wonderful opportunity to learn about and explore the value of these natural phenomena, while enjoying nature and the Canary Island climate.

In the municipality of San Juan de la Rambla in the north of the island of Tenerife lies a delightful circular natural swimming pool, known to the Canary Islanders as Charco de La Laja, which was created by volcanic lava being cooled by the waters of the Atlantic Ocean. This particular natural swimming pool has become one of the most popular leisure spots on the island, thanks to its numerous attractions. You can bathe or fish in its calm, crystal-clear waters, separated from the ocean by a barrier of black rock, while the area just beside the pool provides a kind of solarium where tourists can sunbathe and get a tan. In addition, the historic quarter of the nearby town, easily accessible on foot, offers bars and restaurants where bathers and sun worshippers alike can cool off with a drink. 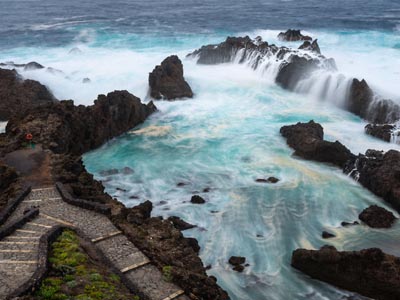 In the neighbouring municipality of La Guancha, barely four kilometres away, is another superb attraction of the northern coast of Tenerife. The Charco del Viento, a natural complex of four pools, comes into view at the end of a narrow path that crosses countless banana plantations. Once there, the great outstretched arms of rock shape and protect these pools, whose crystal-clear waters are equally appreciated by divers and snorkelling enthusiasts alike. Furthermore, their proximity to the northern foothills of Mount Teide offers impressive views of the volcano.

Both the Charco del Viento and the natural swimming pools of El Caletón were formed during the 1706 eruption of the nearby Trevejo volcano. The El Caletón pools, located on the Garachico coastline, are the legacy of that calamitous natural phenomenon that destroyed the town’s formerly prosperous port overnight. Near the castle of San Miguel, a defensive fortress dating from the sixteenth century, there appeared these small pools, which are highly popular with holidaymakers. Their proximity to the old quarter of Garachico (which has been declared an Asset of Cultural Interest thanks to its rich historic and artistic heritage) is more than enough to justify spending a day in the area.

If we make our way down the western coast of Tenerife, we soon come to the pretty town of Puerto de Santiago, a coastal community with a population of less than six thousand residents—part of the municipality of Santiago del Teide. On its seafront, Puerto de Santiago boasts another charco which is extremely popular with locals and visitors alike. This is the Charco de El Tancón, which is actually much more than a charco: it is a sea cave with an unusual shape and a half-hidden location, offering an almost magical place to bathe. Access to it is little more than an opening in the rocky wall of the coastline, very near the Hotel Barceló Puerto Santiago (vincular con url). For this reason, it is recommended to avoid the area during high winds.

In the same municipality, 11 kilometres from the old quarter, is the Acantilado de los Gigantes natural swimming pool. This is a secluded pool close to the seashore, which the people of Tenerife also know as the Charco de Isla Cangrejo, after the housing development where it is located. This corner of the shore, sheltered from the swell by a concrete wall, offers breathtaking views of the Los Gigantes Cliffs, the most impressive cliffs in the Canary archipelago, reaching up to 600 metres in height.

Having reached the south of the island, we then have the opportunity of visiting the Charco de Los Abrigos, a pool located in the Granadilla de Abona municipality, the fourth most populous in Tenerife. Recommended during the week when it is practically deserted, this natural swimming pool is particularly susceptible to tidal conditions. For that reason, if the sea is rough, it is vital to exercise extreme caution when bathing in the pool.

Now, heading back up the east coast of Tenerife, we come to the Charco de la Virgen. Located in La Jaca, a coastal district belonging to the municipality of Arico, this charco—or naturally formed swimming pool—is famous for its profile on social networks. Modified and improved by the residents in the early 2000s, the pool offers pleasant views of both the beach and the neighbourhood’s small harbour. These days, the pool is mainly frequented by foreign tourists.

On Tenerife’s east coast, the municipality of Güímar boasts countless natural swimming pools, scattered among its little fishing villages. Two examples are Punta Prieta and La Caleta, two tiny villages whose cottages spread out along the coastline, and which have hidden natural swimming pools that are rather different from those described above. The residents have carried out modifications so that the original volcanic structures are now hidden beneath painted concrete cladding. However, their desolate location means that these bathing areas are completely removed from the usual tourist trail. They are particularly impressive during the twilight hours. 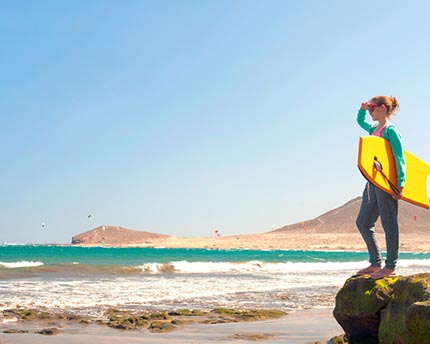 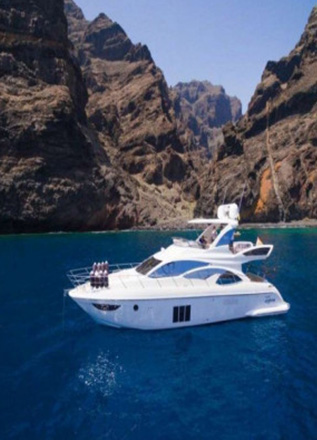 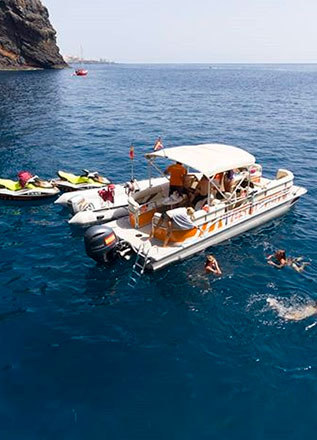 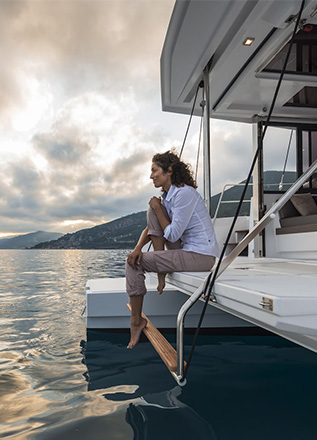 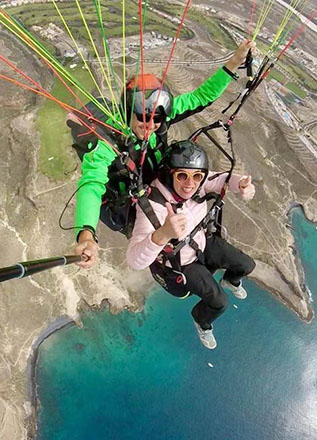