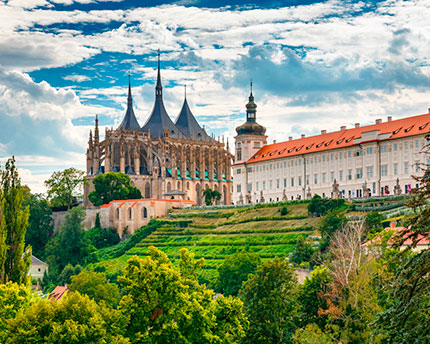 Just one hour away from Prague, right in the heart of the Central Bohemia Region, lies Kutná Hora, a town that came to rival the Czech capital in terms of political, economic and cultural importance. Today, however, it does so simply as a destination of great historical and artistic interest.

In 1995, its old town was declared a UNESCO World Heritage Site. The main attraction for visitors who come from all over the world is somewhat macabre, consisting of the famous Sedlec Ossuary, a chapel replete with human bones arranged in what is at least an imaginative, if not artistic, way, delighting the least apprehensive tourists.

However, beyond this morbid place there are a great many other reasons to stroll through the streets of Kutná Hora and enjoy the Gothic spirit of its unique buildings, starting with the magnificent St Barbara’s Church. But before we do that, let’s get to know more about the town’s history.

Kutná Hora: a day-trip from Prague

Known over the centuries as the Town of Silver, mining for this precious metal in the local area led to both the boom and subsequent decline of Kutná Hora. There is evidence that silver was extracted as early as the tenth century, although it wasn’t until the thirteenth century when it began to take on greater importance. This was primarily thanks to a new mining law introduced by King Wenceslaus II of Bohemia, which outlined how the product must be mined and sold.

Social tension between aristocratic German settlers, who had de facto control of Bohemia’s economic resources, in contrast with the increasingly impoverished Czech people, as well as the rise of a reformist Christian movement led by the theologian Jan Hus, resulted in the so-called Hussite Wars, which took place between 1419 and 1434. In the end, the Czech general Jan Zizka, a supporter of Hus, took the town of Kutná Hora.

From then on the town enjoyed a new period of splendour. However, this was not to last long, as the town was later burned by distrusting imperial troops. It wasn’t until the late fifteenth century when a line was drawn under the conflict between Catholics and Hussites.

From the sixteenth century, the definite decline of Kutná Hora as an economic, political and cultural centre became apparent. The silver mines were flooded, rendering them unusable, and the insurrection of local people against the imperial power of Ferdinand I of Habsburg caused him to take away all the town’s privileges. As a result, it lost its hegemony, which had come to represent 40% of all the supply of silver in Europe between the fourteenth and sixteenth centuries. A plague epidemic in the seventeenth century, as well as the ravages of the Thirty Years’ War, was the final blow to the town’s ruin.

What to see in Kutná Hora

In the Gothic Cemetery Church of All Saints in Sedlec, on the outskirts of the town, is one of the most perturbing places in the Czech Republic and Kutná Hora’s main attraction. Sedlec Ossuary, a small chapel decorated with all manner of human bones, is said to hold the remains of around 40,000 people—although some raise the figure to 60,000—who would have died between the fourteenth and fifteenth centuries. 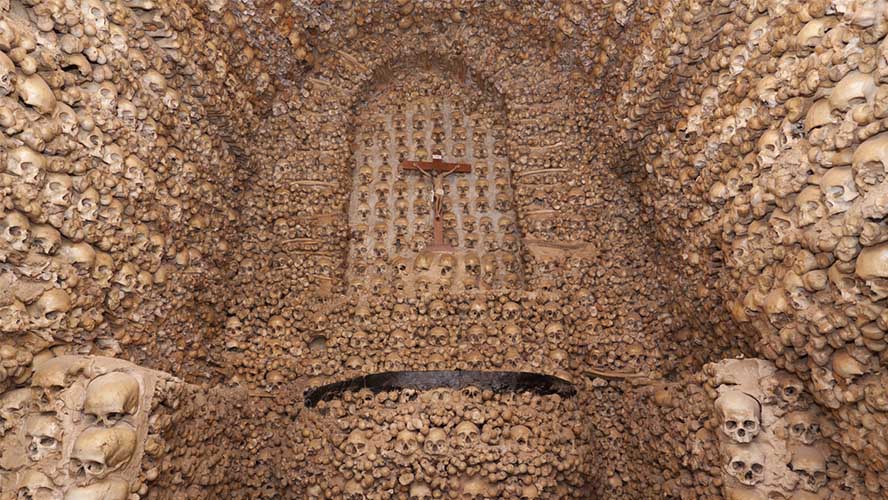 The high number of remains indicates that the cemetery attracted Christians from the whole Bohemia region. The area was already home to a Cistercian monastery in the thirteenth century, whose abbot accompanied crusaders to the Holy Land and brought sand from Golgotha (the hill on which Jesus Christ was crucified). Said sand was scattered in the monastery’s cemetery, attracting believers from the entire region who came looking for the best place to lay their bodies to rest. Global diseases such as the Black Death (fourteenth century) and deaths from the Hussite Wars filled heaven with souls and Sedlec graveyard with dead bodies.

Around 1400, in the centre of the cemetery, a Gothic church was built. Its chapel, located in the basement, was used as an ossuary for the many human remains that were unearthed during its construction. It wasn’t until centuries later, in 1870, when a craftsman, the carver Frantisek Rint, was commissioned to give some sense of order to the old bones that were stacked chaotically throughout the chapel. 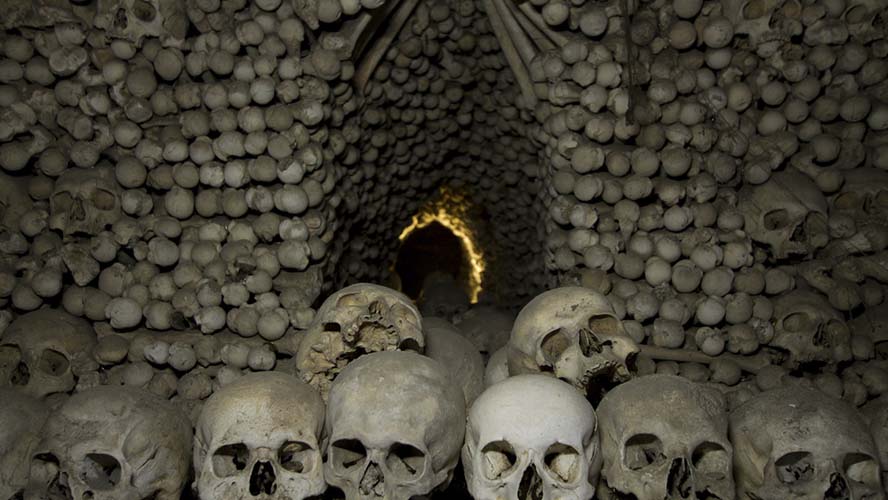 Inside the Kutna Hora Bone Chapel

Very close to the ossuary is the beautiful Church of the Assumption and St John. In fact, admission to the Bone Chapel normally includes a visit to this church, which was the largest in Czechia before St Vitus Cathedral in Prague was built. Be that as it may, it nevertheless boasts the title of the first Gothic church in the region.

Belonging to the Order of Cistercians, construction first began in 1320 and was financed, as you might expect, by extracting silver from the vicinity of the monastery’s land. The Hussite Wars, in the early fifteenth century, destroyed a large part of the church, leaving it in ruins for three centuries. It wasn’t until the eighteenth century when re-construction work began in a local style that cannot be seen in many other places: the Gothic Baroque. 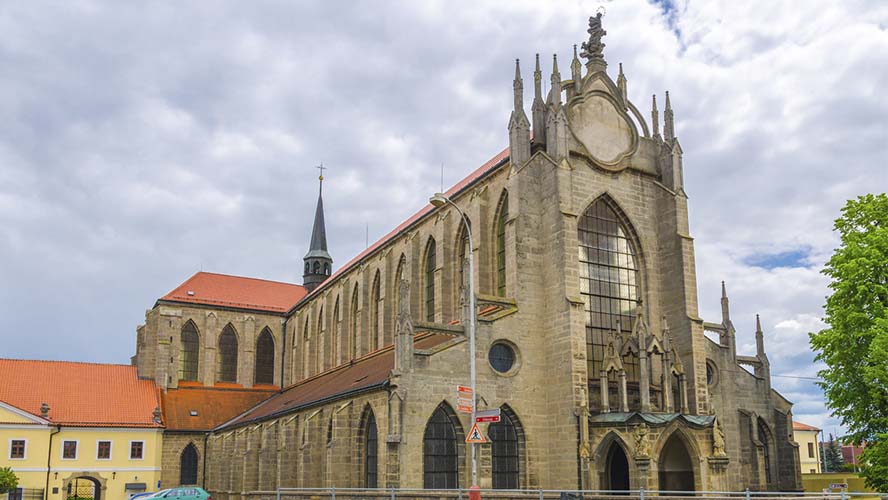 The Sedlec district is around 1.5 kilometres from the town centre, accessed by means of a pleasant walk through its tranquil streets dominated by the imposing presence of the tall, thin spires of St Barbara’s Cathedral—a typical example of a quintessential Gothic church. It’s therefore not inconsequential to acknowledge that what we’re looking at is the most famous Gothic building in Central Europe.

Construction on the magnificent church, which boasts five naves, began in 1388, but it wasn’t until the early twentieth century when it was finally concluded. The aim was for it to rival St Vitus Cathedral. However, as its construction was completely dependent on the mines, the sector’s decline in the sixteenth century called a halt to the work.

The profusion of decoration on the exterior buttresses, with human and mythological figures painstakingly carved from stone, as well as the beautiful illumination of the interior stained-glass windows and the chapels’ interesting medieval frescoes with scenes of the local area’s age-old way of life are just some of the features that make it a must-visit for art enthusiasts. 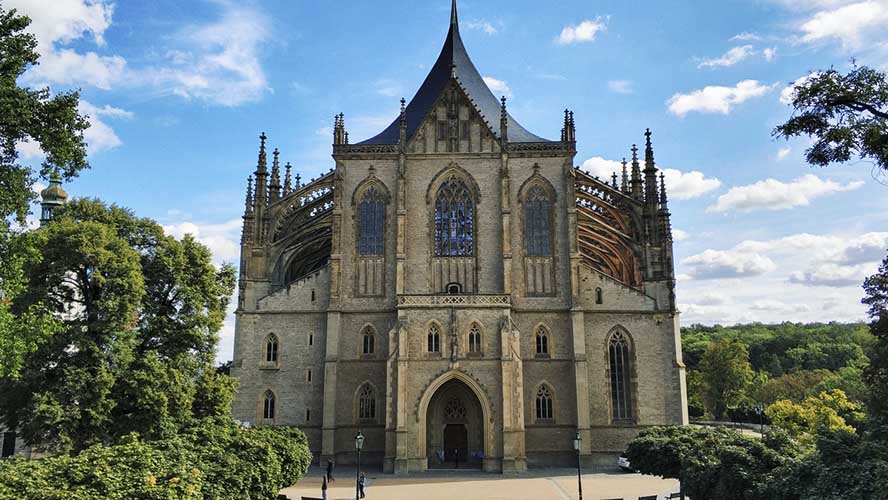 How to arrive in Kutná Hora from Prague?

From Prague’s central station buses R9 and R41 depart for Kutná Hora, arriving at Kutná Hora Hl.n station on the outskirts of the town. The journey takes one hour and 15 minutes. If you’re not too tired, you can walk to the town, or at least to the area of Sedlec, where the famous ossuary is situated. If not, the best thing to do is to take bus S28 to Kutná Hora mĕsto, in the town centre.

What are the hours of the Ossuary and the Church of Sedlec?

What are the visiting hours of the Church of Santa Barbara? 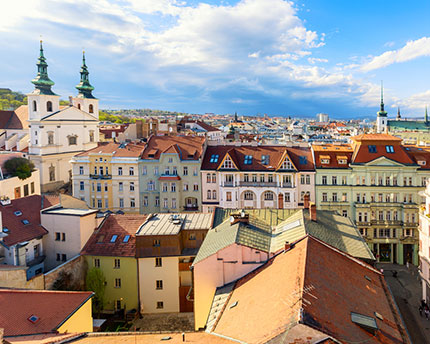