The Piazza del Duomo, the heart of Milan 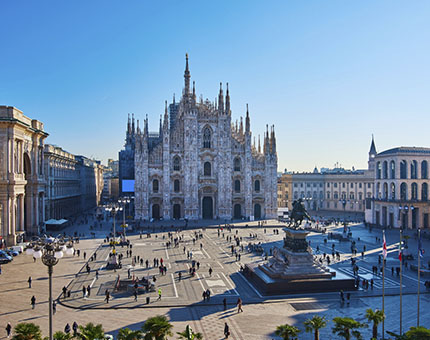 When we close our eyes and think of Milan, our brain will instantly, and almost inevitably, place us in its Piazza del Duomo, face to face with the city’s imposing cathedral. The Piazza del Duomo offers, without a doubt, the most evocative image of this Italian city; it’s an obligatory stop for any traveller, no matter how often they visit Milan. It’s not difficult to drop by, even if you don’t mean to, as the city’s main square is also its heart, since the life of those in Milan revolves around it.

So, not only will you be able to take the pulse of the largest city in Lombardy, but it’s also the perfect opportunity to get to know some of its great monuments. Without leaving this area, you’ll see the Cathedral, the Galleries of Victor Emmanuel II, the statue that pays homage to him, and the Arengario Palace or Royal Palace.

A square with the majestic Duomo of Milan

The square, rectangular in shape, occupies an area of 17,000 square metres. It already existed in the 14th century mainly for commercial purposes, but its current appearance is more modern. We have the architect Giuseppe Mengoni to thank for its design that dates from the mid-19th century.

The monumental splendour of the buildings on its surface is surprising, and there are many more surprises to be found here. Under the pavement, the works on the underground brought to light the foundations of the ancient basilica of Santa Tecla, as well as the Battistero di San Giovanni alle Fonti. Whether it hides any more secrets remains to be seen, but it certainly offers a good handful of places to discover. 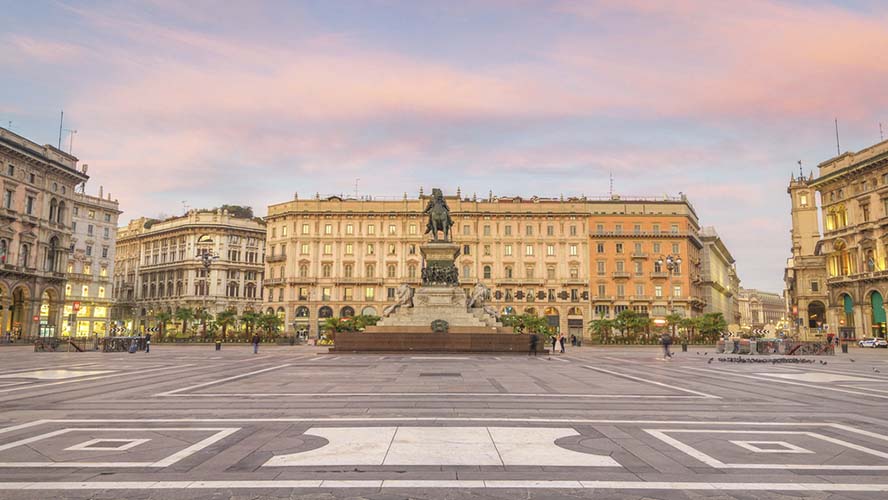 It’s one of the most impressive cathedrals not only in Italy, but in the whole world. The Duomo of Milan (duomo, etymologically “house of God” and “cathedral” in Italian) is the second-largest cathedral in the world, second only the one in Seville. The construction work was worthy of its stature, with the first stone being laid in the 14th century and the last one six centuries later, making its Gothic style a combination of late Gothic and Renaissance.

Here are some more figures to demonstrate its grandeur: it’s 150 metres high and can hold 40,000 people. There are 135 characteristic spires that mould its unique shape, each holding a statue. Its windows are also said to be among the largest on the planet.

In addition to admiring its marble façades, for which we highly recommend taking some time, the cathedral (internal link) allows for more comprehensive visits such as:

To the right of the main doors of the Duomo, a large arch marks the beginning of the Galleria Vittorio Emanuele II (link to Galleria Vittorio Emanuele II). Dedicated to the first king of Italy after unification, as well as serving the practical purpose of linking Piazza del Duomo with Piazza della Scala (where the Teatro alla Scala is located (link to teatro alla Scala), it’s one of the oldest shopping arcades in the world. It was built between 1865 and 1877.

It’s hard not to look up when you first step inside: the vaulted ceiling and arcades covered in glass and iron are impressive, but if you look down you’ll find some of Italy’s finest fashion boutiques, as well as charming cafés and restaurants on all four floors.

Take a moment to admire the mosaics on the floor and to observe the tradition of putting your heel on the testicles of the bull of Turin depicted here. The gesture may seem a little crude, but it supposedly brings good luck! 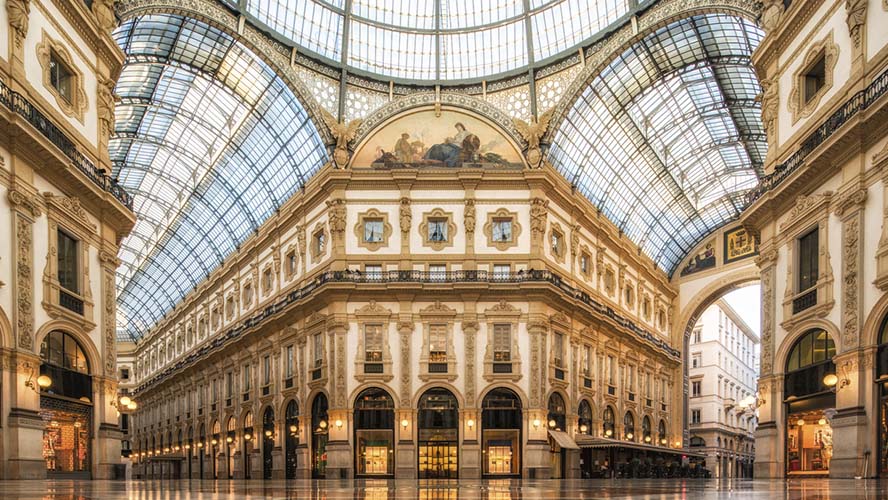 Situated opposite the cathedral, this palace was once the seat of government. It has belonged to the state since 1920 and has been converted into one of the city’s most important cultural centres. Construction work on the palace began in the 13th century, but over the years it has undergone several changes; one of them was to open up the palace to the Piazza del Duomo. The last one was to erase the traces of the 1943 bombing of Milan during the Second World War. 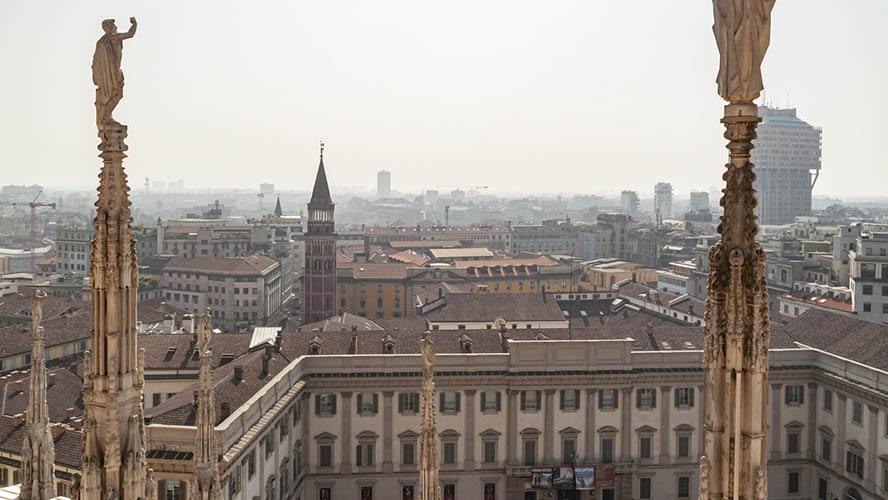 In the centre of the square stands this bronze equestrian statue depicting the monarch in battle, trying to hold back his horse. It was built at the end of the 20th century to complete the work on the square that houses it.

Opposite the cathedral, on the left, the Carminati Palace stands out. It’s a private building, built in the 19th century, which has an impressive façade, made famous during the 20th century by the striking fluorescent advertisements it displayed. On the ground floor, there’s a café that’s perfect for recharging your batteries before continuing to explore the area around Piazza del Duomo. 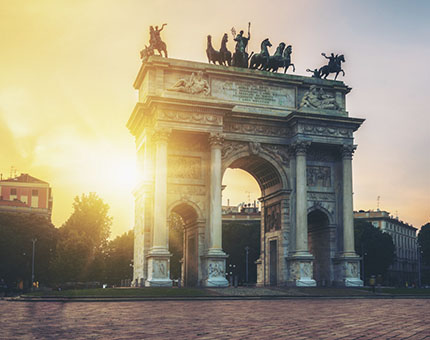 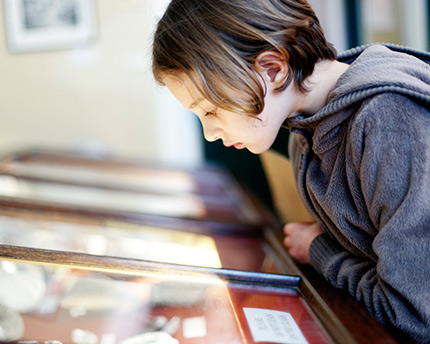 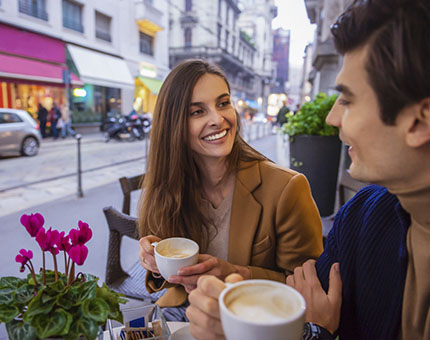 Ideas for a romantic trip to Milan 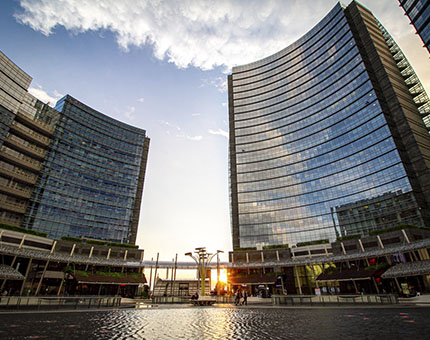 Piazza Gae Aulenti: the most futuristic corner of Milan