Campeche, an irresistible dose of culture and nature 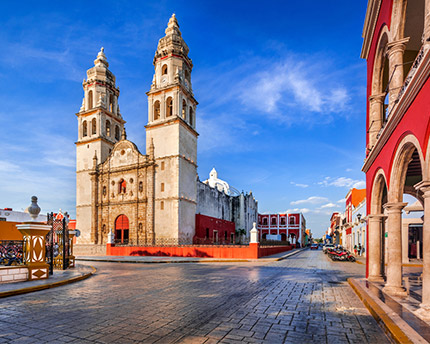 The state of Campeche, the third of those that make up the Yucatan Peninsula –together with Yucatan and Quintana Roo–, is one of those places that are capable of surprising anyone. Thanks to its exciting combination of culture and nature, Campeche offers a remarkable set of attractions. Ancient Mayan cities, the inexhaustible charm of its capital city, exquisite cuisine, and beautiful haciendas are just some of its countless possibilities.

Visiting Campeche means you have the chance to discover a territory that still preserves its virgin nature: mangroves, jungle, rivers, lakes, lagoons, estuaries, and so forth. Places such as the Miguel Colorado cenotes or the Calakmul Biosphere Reserve –the largest tropical forest reserve in Mexico– invite you to live all kinds of adventures. Or just relax on one of its gorgeous beaches, such as Isla Arena, Playa Bonita, Sabancuy, Isla Aguada…, and enjoy the great hospitality of the locals.

Campeche is also its history. The state’s incredible archaeological sites, such as Edzna, Calakmul, Becan, Xpuhil, and many others, will take you back in time to discover all the magic of the Mayan World. Moreover, its capital city of San Francisco de Campeche, a place of pirate legends and cobbled streets, is an authentic colonial treasure recognized by UNESCO as a World Heritage Site.

Nature, art, adventure, history, culture, gastronomy… Get ready to discover Campeche, one of the most beautiful destinations in Mexico!

There are 16 archaeological sites open to the public throughout the state of Campeche. Each of them is an authentic historic jewel and a vital part of the incredible Mayan heritage that you can discover all over the Yucatan Peninsula. Chichen Itza, Uxmal, Tulum, Coba …, among all of them, Edzna is one of the ancient Mayan cities that you cannot miss. 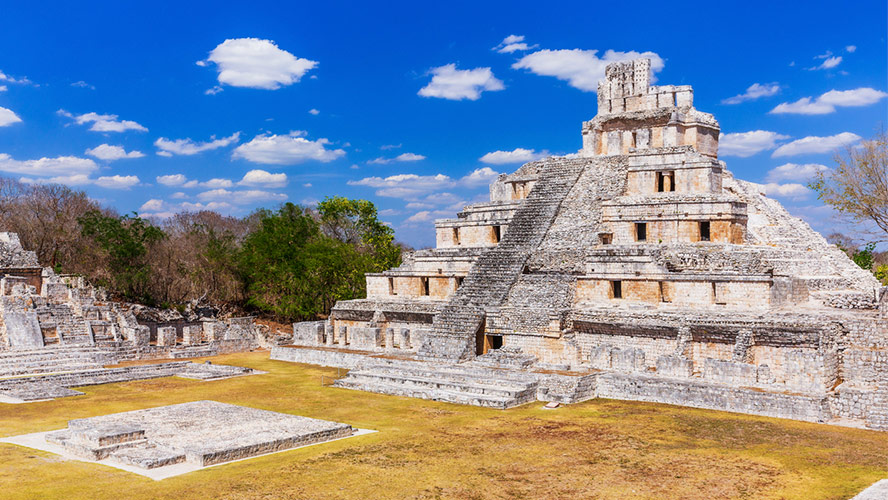 One of the most relevant centers of political and economic power of the Mayan World between the years 400 and 1200 CE, Edzna is among the most interesting pre-Hispanic cities in Mexico. The archaeological site is composed of a unique collection of temples, palaces, and other quite impressive structures, such as the Great Acropolis and the Building of the Five Floors, the Nohochná (The Big House), the Ball Court, and the Northwest Temple, known as The Old Sorceress, among many others. In addition to its architectural wealth, Edzna is important for its complex hydraulic system, a revolutionary infrastructure that allowed the city to harvest water for human consumption and agricultural use throughout the year. 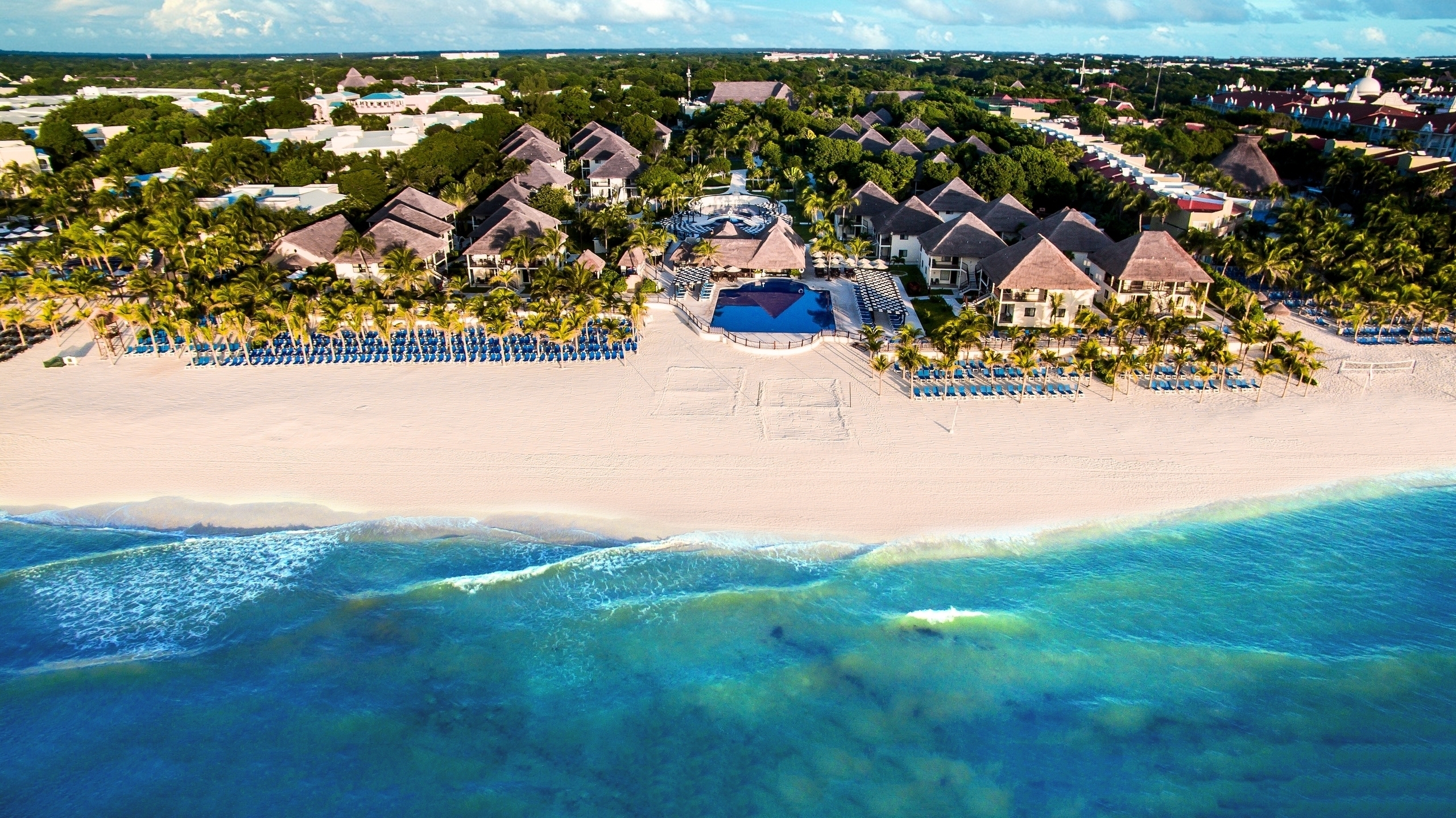 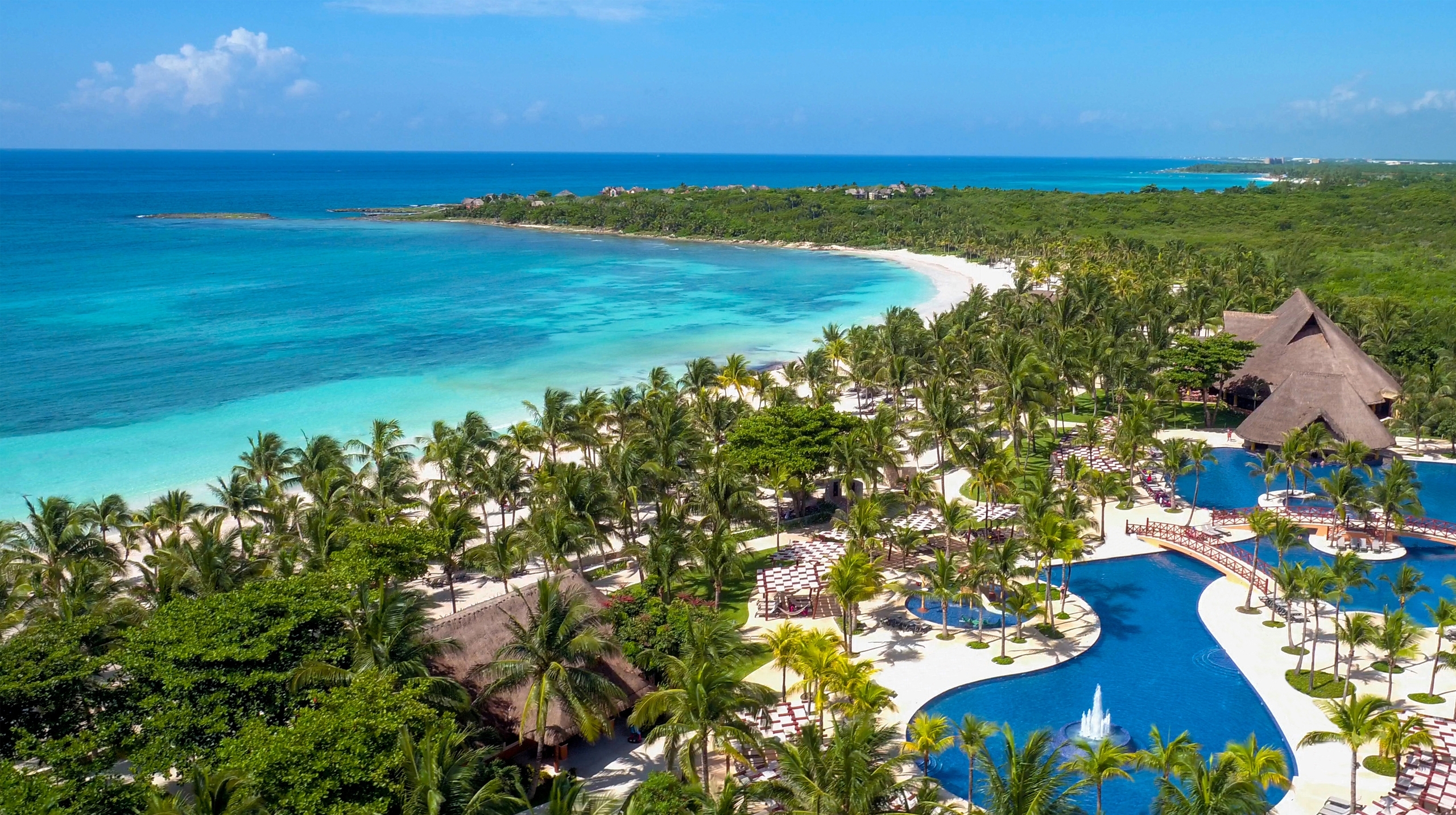 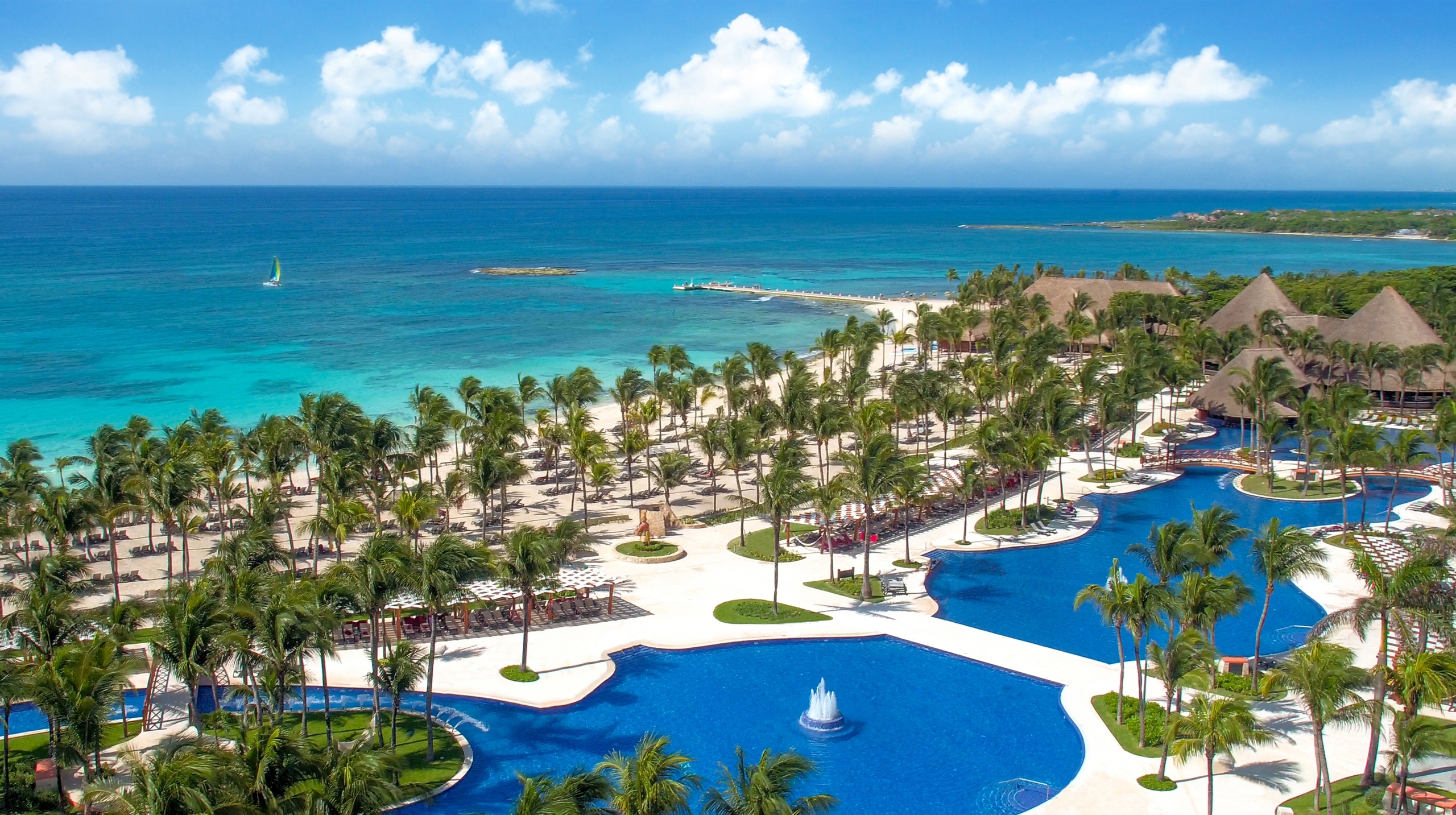 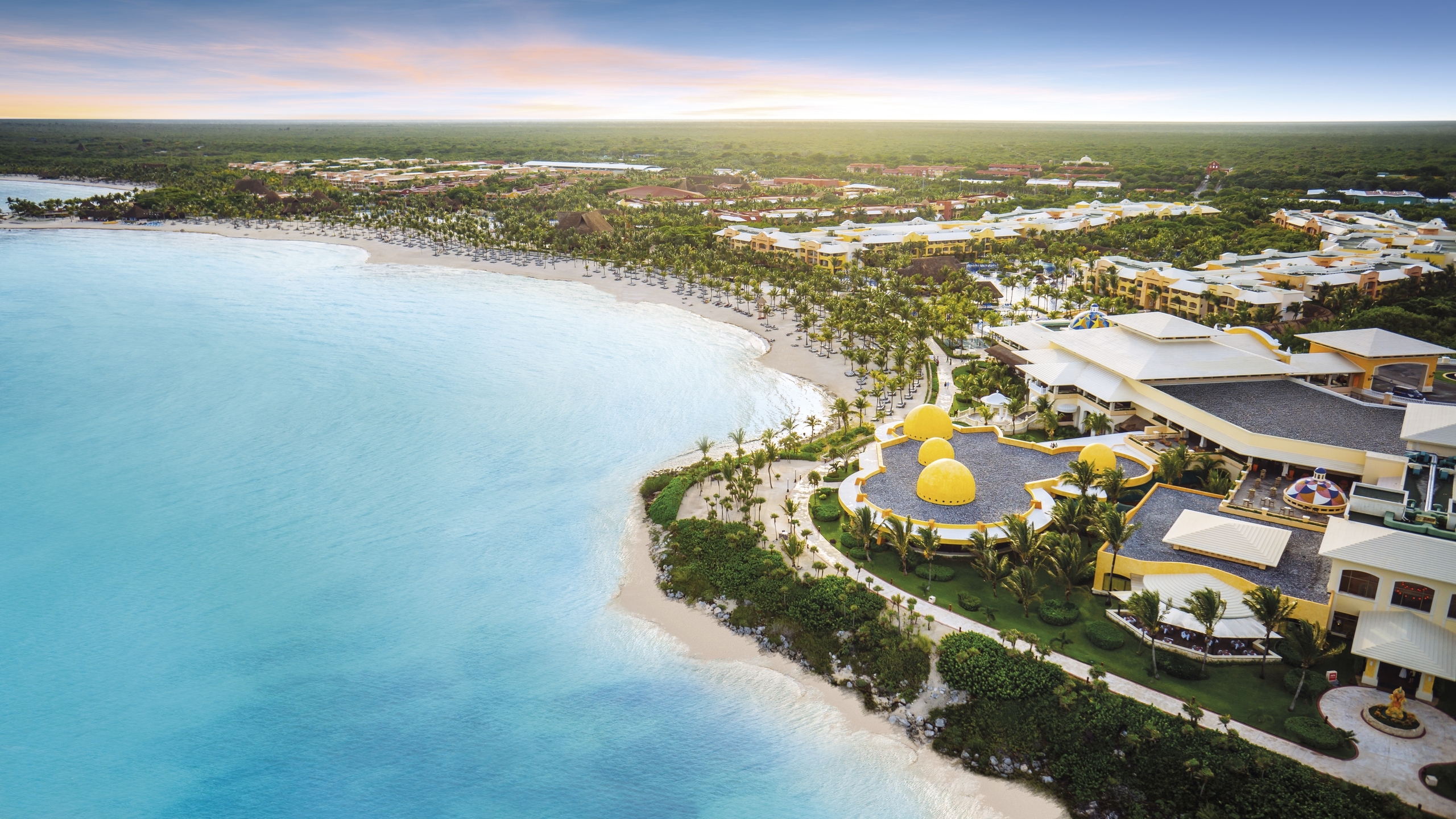 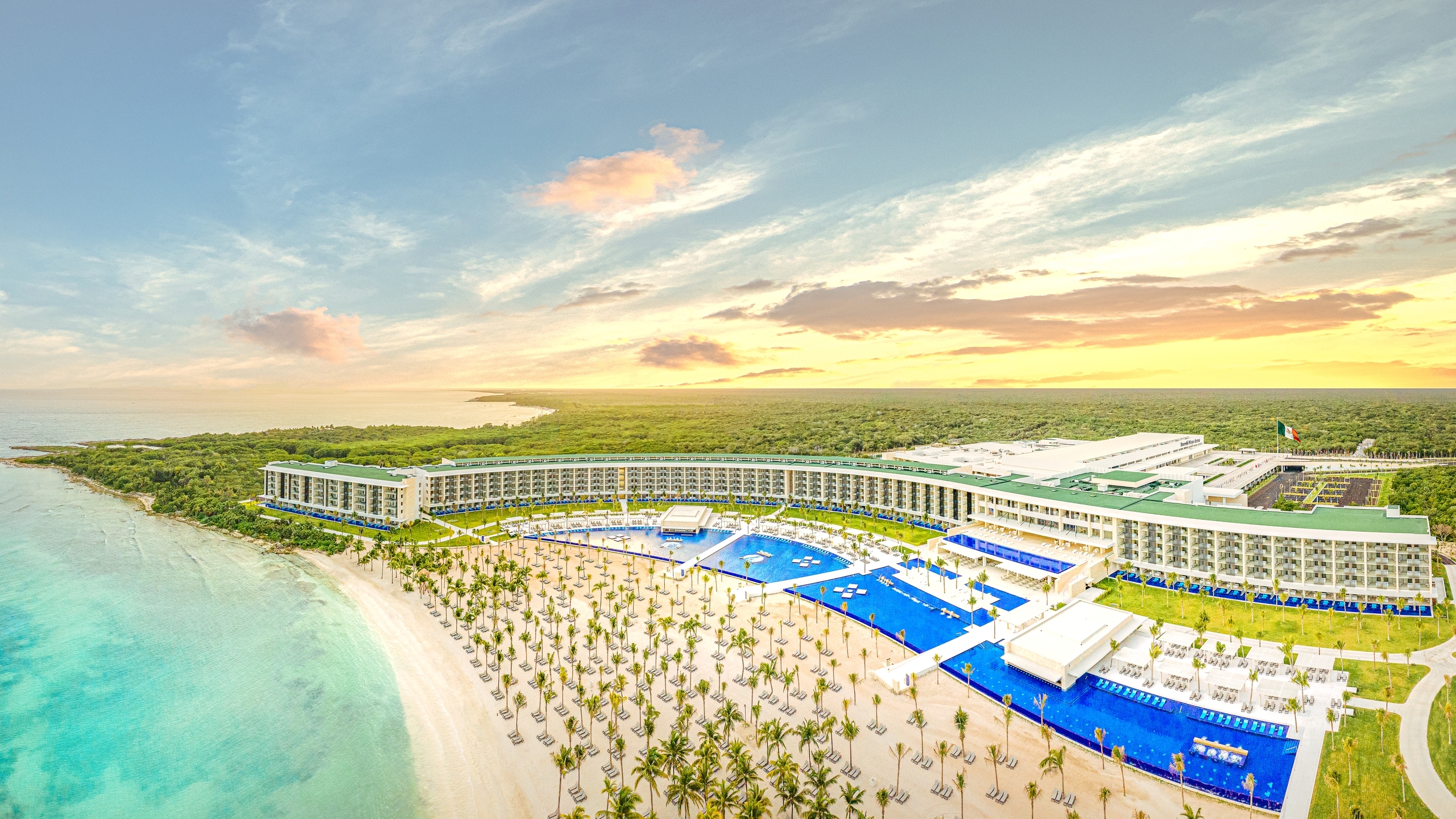 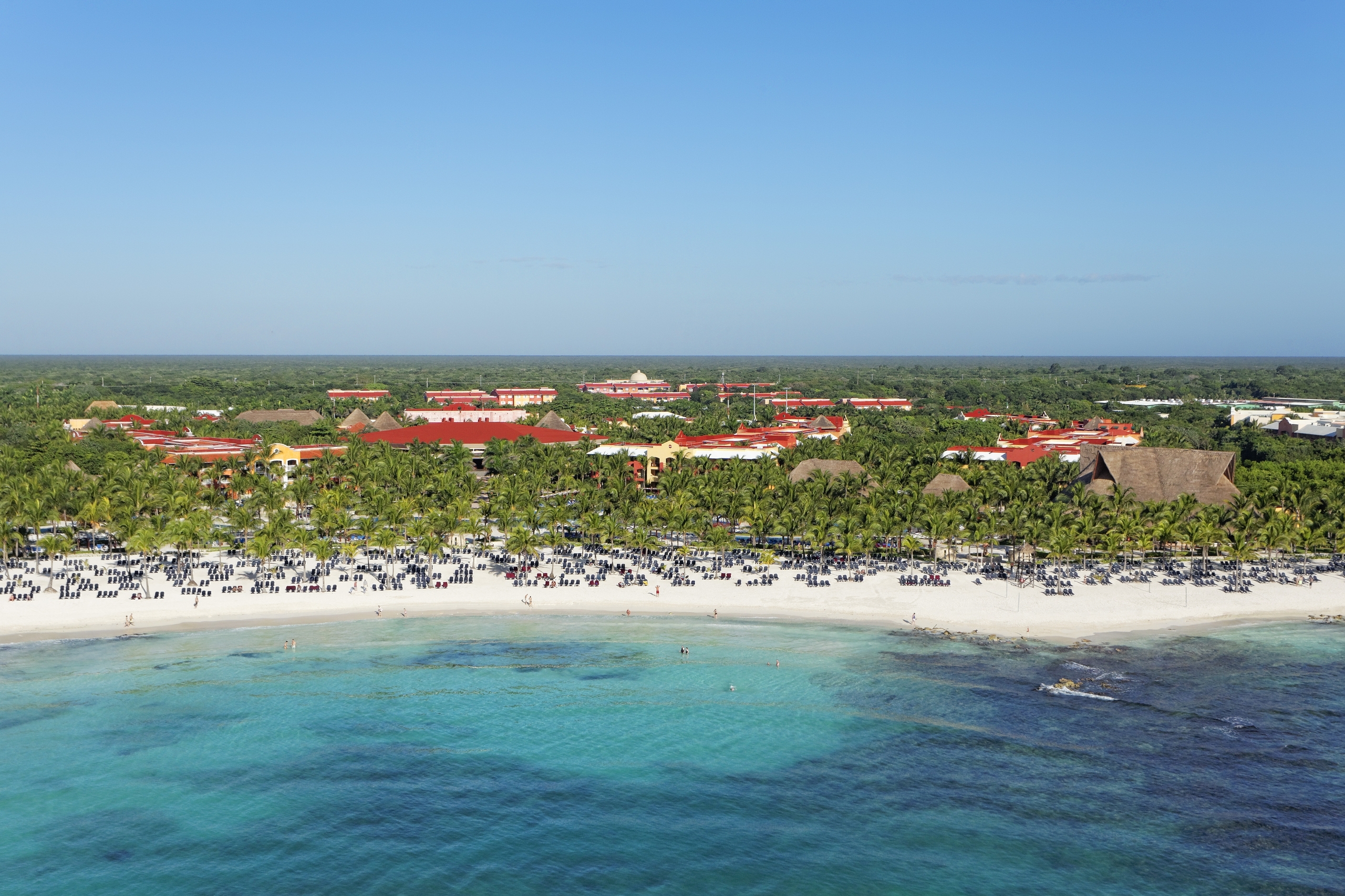 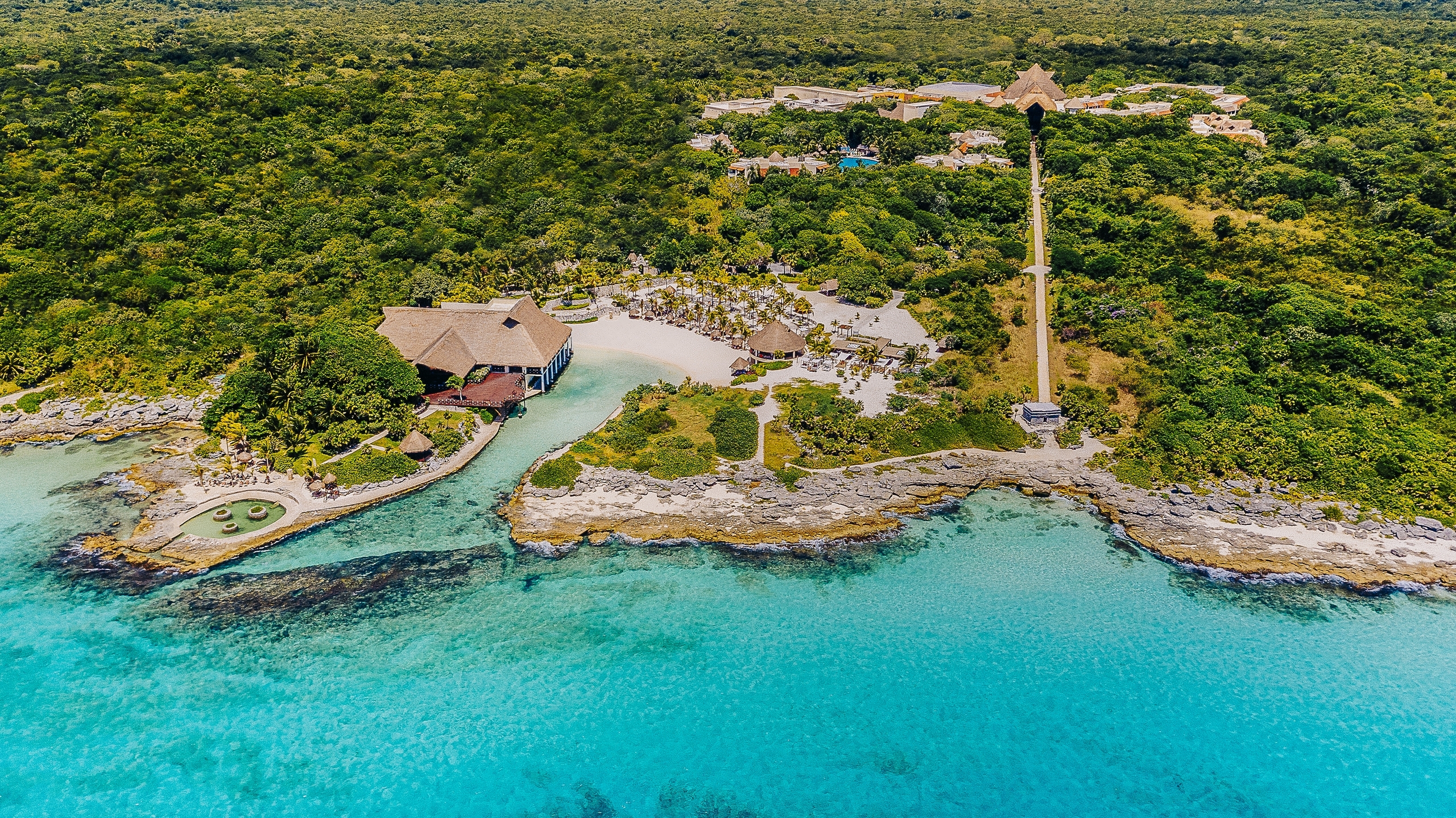 Hacienda Uayamón, a jewel in the middle of the jungle

Campeche’s past has strong links to its large estates or haciendas, echoes of a time when cattle ranching and agriculture expanded notably throughout the state. Crops such as sugar cane and henequen, or the exploitation of chicle (natural chewing gum) and the famous “palo de Campeche” (logwood tree), made many of these haciendas the center of regional development and, of course, allowed their owners to become extremely rich. 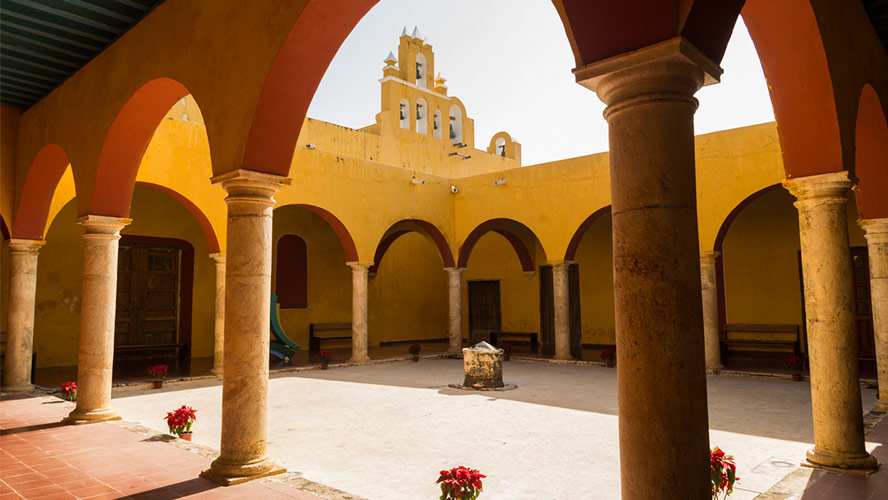 Located about 12 miles from the city of Campeche and built around the year 1700, Hacienda Uayamon is one of the best examples of this unique heritage. Turned into a luxury boutique hotel –like many of the haciendas in the area–, Uayamon still preserves its old buildings, both the elegant residential areas and the workspaces, all of them transformed into the rooms and common areas of the hotel: spa, restaurant, pool, gardens…. And everything surrounded by the dense tropical jungle. A truly magical place!

Founded in 1540 and recognized as a World Heritage Site by UNESCO, San Francisco de Campeche, the state capital, is the only walled city in Mexico and a true historical jewel. Walking through the streets of its historic center, you can contemplate priceless colonial buildings, such as the Cathedral and the former temple of San Jose. Different period mansions converted into beautiful shops, restaurants, galleries, and museums also make the old town a special place. The defensive walls and the bastions that protected the city for centuries are still standing, and they are, of course, one of the main attractions of this historic city. 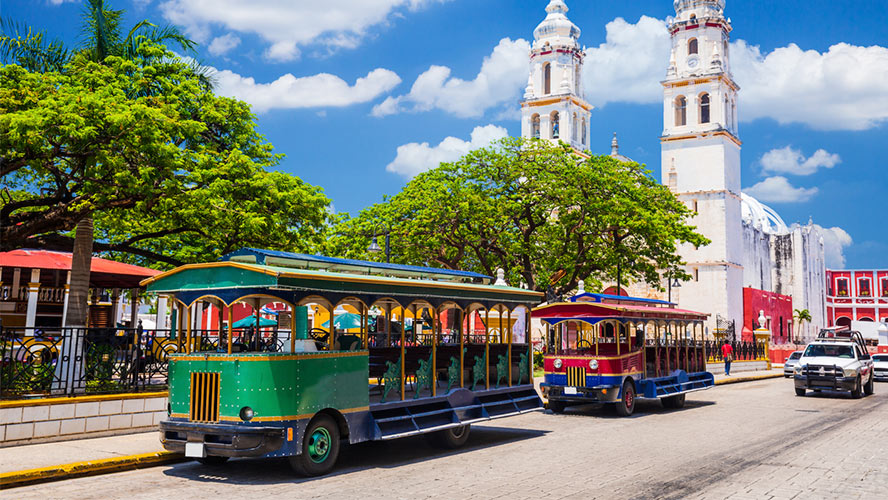 Outside its walls, Campeche also has a lot to offer. Like the forts of San Miguel and San Jose, two strongholds of the city’s defensive system –today converted into exciting museums. Like its beautiful sunsets, that you can enjoy strolling along the Malecon, right on the shore of the Gulf of Mexico. Like the Moch Couoh Park, with its spectacularly lit gardens, trails, lakes, and fountains. Historical or contemporary, the attractions that you can find in the city of Campeche will leave you just speechless.

Calle 59, the heart of the city

Connecting the Puerta de Tierra (Land Gate) with the Puerta de Mar (Sea Gate), the famous 59th Street is the main artery of the historic center of Campeche. Take a stroll down this nice cobbled street and enjoy its traditional architecture; buy a few delicate handicrafts; get a taste of the delightful local cuisine, enjoy the lively nightlife of the city… It is a place that you have to discover! 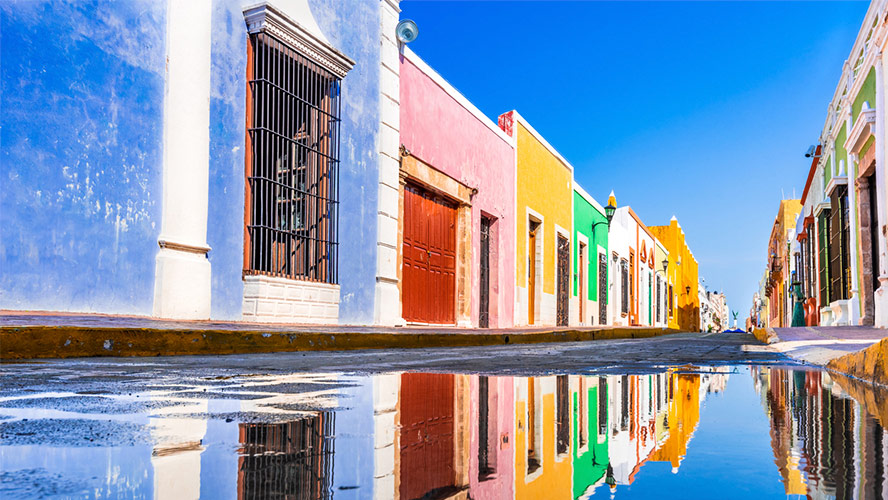 Places such as the Casa del Teniente del Rey, from the 18th century, the San Francisquito Church, from the 17th century, or Casa San Pablo, an art gallery that promotes the work of local artists, make 59th Street a must-see. Also, do not forget to taste the delicious chaya-flavored water with pineapple, coconut ice cream, or crunchy marquesitas while walking through this beautiful pedestrian street. You are going to love it!

The Malecón of Campeche, joy by the sea

Built on land reclaimed from the sea, this close-to-4-mile-long promenade covers a good part of the city’s coastline. Ideal for a good walk or bike ride, the Malecon has several parks, playgrounds, sports zones, and decorative elements, such as the sculpture “Mayan Angel”, or the colorful name of the city in volumetric letters –a selfie must. 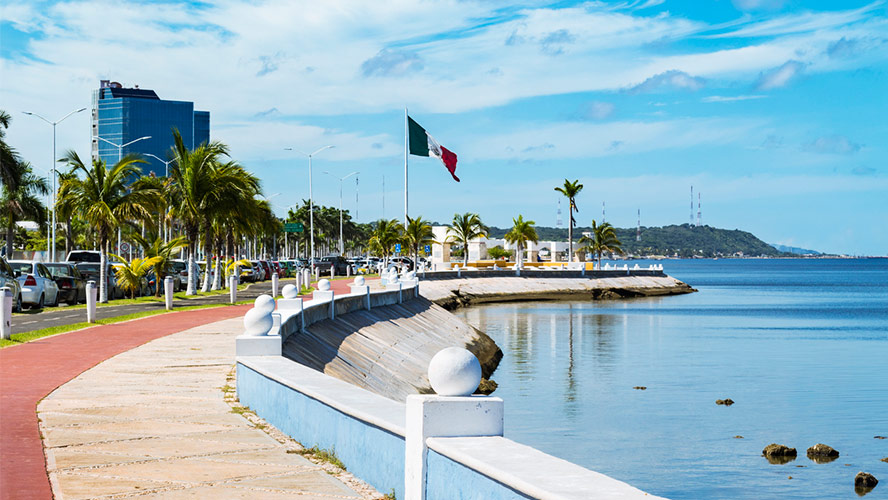 Sunset is, without any doubt, the perfect time to visit Campeche’s Malecon. Watching our bright star plunge into the sea, painting the sky in impossible colors, while the fishing boats return to port and seabirds fly away to look for their night-time roosts, is a breathtaking spectacle that nobody should miss.

Since day one, the city of Campeche was threatened by pirates that sailed the Gulf of Mexico and the Caribbean Sea. It was precisely for that reason that the walls, forts, and bastions necessary for its defense got built. Masterpieces of military architecture that still stand, many of them were turned into stunning museums that tell the rich history of the city and state of Campeche. 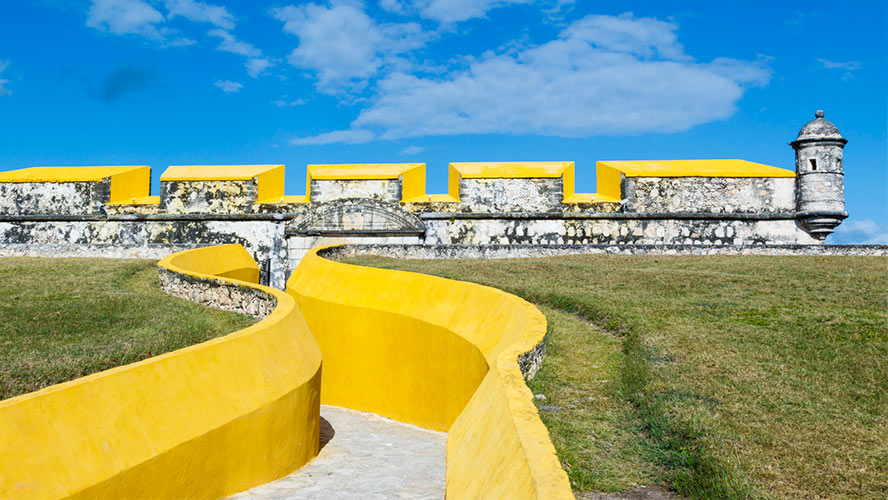 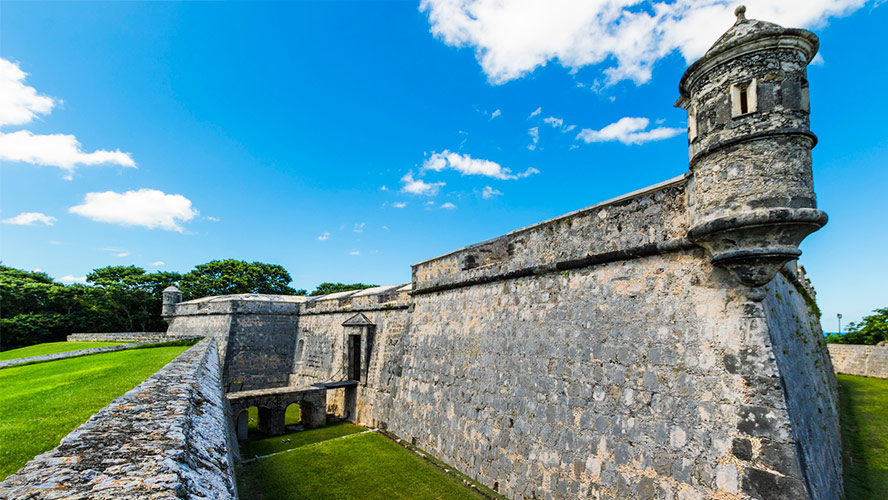 Campeche‘s carnival, an explosion of color

Campeche is all about color, and its carnival is the best proof of it. Considered one of the oldest in Mexico (it is said that it was held for the first time in 1582), this popular fiesta is one of the most picturesque festivals in the country. And, of course, a time when the entire city gets overwhelmed with joy. Like many other carnivals on the Gulf Coast and the Caribbean, the one that takes place in Campeche is also rooted in the Catholic tradition as well as in the rhythms and other cultural elements that came to America with enslaved Africans. 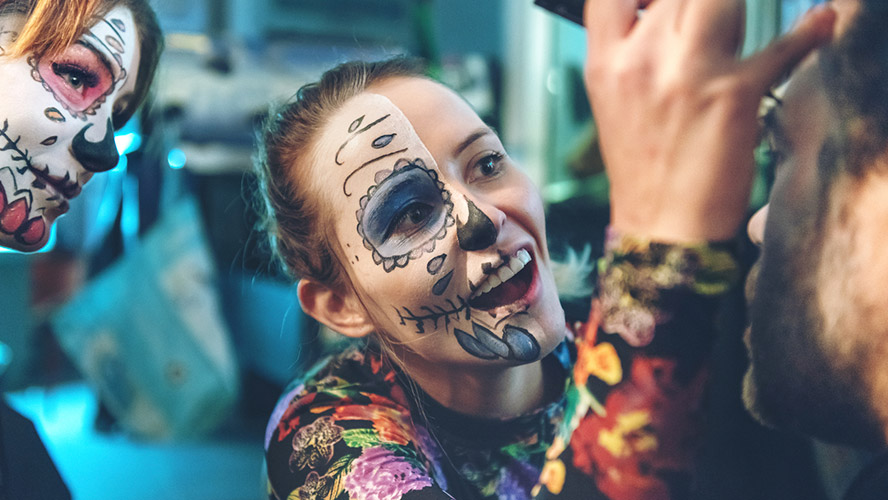 Campeche’s carnival is celebrated every year for a couple of weeks and it invades different parts of the city –from the Malecon to the San Roman neighborhood and the historic center– with several acts and parades. The “Burial of Bad Humor”, the coronations of queens and kings, the parade, costume contests, concerts, and food stalls are just some of the most joyful and fun moments of this fabulous party.

Eating in Campeche is a true pleasure! Pickled pampano fish, coconut shrimps, school shark bread, cochinita pibil…, local cuisine is a delicious fusion of the traditional flavors of the Mayan World and those of central Mexico with nuances from the Antilles and Spain. All over the city, you can find all kinds of restaurants that will serve you authentic delicacies. 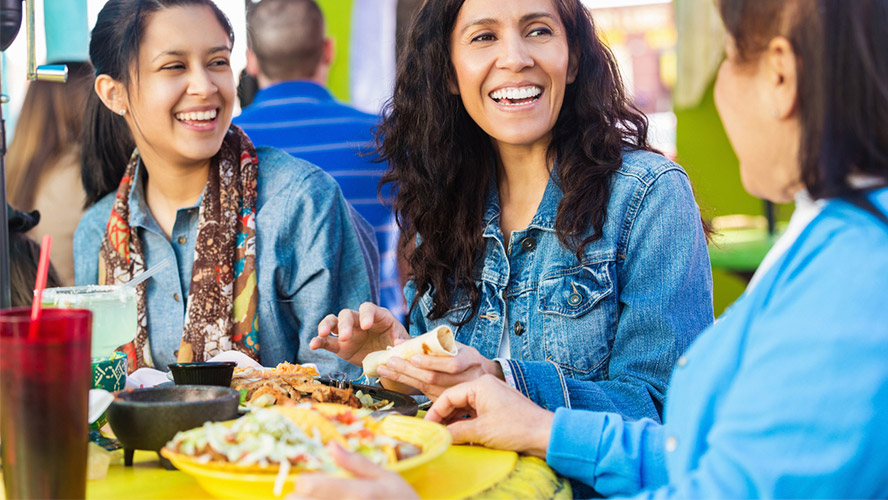 How to get to Campeche?

Campeche connects with the rest of Mexico and the world through the "Ingeniero Alberto Acuña Ongay" International Airport, located 10 minutes away from the Historic Center of the city of Campeche. Also, the Ciudad del Carmen International Airport is a little over 200 mi. away from the city. By highway, the state capital is about 100 mi. from Merida (Yucatan) and about 300 mi. from Cancun and Riviera Maya (Quintana Roo). Besides private car (or rental), different bus companies and tour operators connect this destination with other points in the Yucatan Peninsula and the rest of the country. 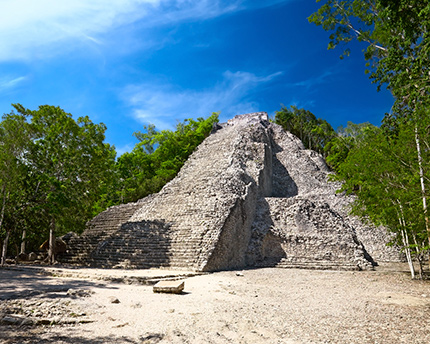 Coba, the great Mayan city of the five lakes 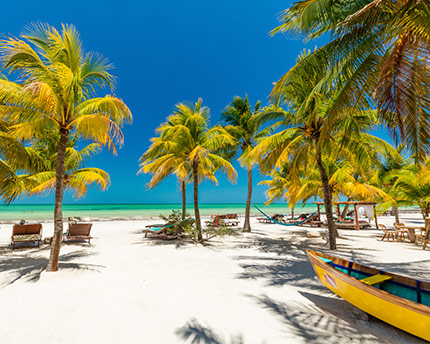 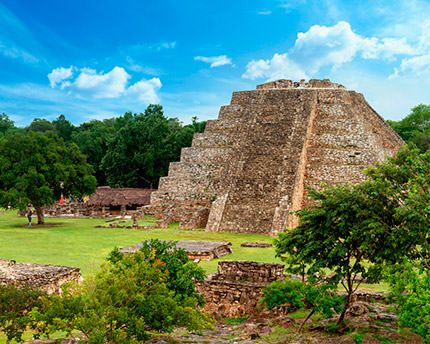 Uxmal, a jewel of Maya architecture 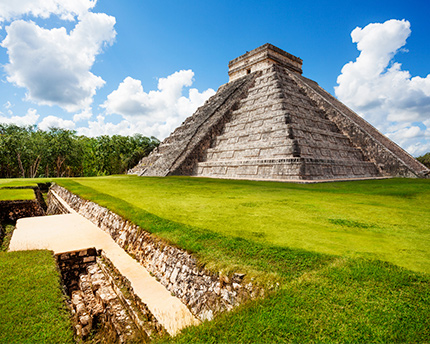 Discovering Chichen Itza, the heart of the Mayan World