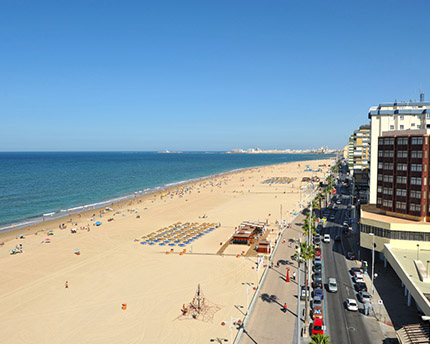 La Victoria beach, La Caleta and the small beach of Santa María are a trio of aces when it comes to Cádiz’s urban beaches. But unlike the second two, La Victoria is a holiday destination in its own right.

In fact, it has the highest concentration of bars, restaurants, beach bars, hotels and other types of accommodation in the city. It’s visited by hundreds of thousands of people each year who come to enjoy its 3 km of sand, with an average width (at low tide) of almost 200 m.

That’s why La Victoria is declared one of the best urban beaches in Europe year after year and is awarded the distinction of blue flag status.

The relationship between La Victoria beach and Cádiz is different to the connection the city’s residents have with La Caleta, a livelier beach with more local traditions, which is somehow more deeply interwoven into the city’s social life. In contrast, La Victoria beach is a symbol of tourism for Cádiz.

Some of the most significant buildings beyond Puerta de Tierra have been built next to La Victoria beach, including the Balneario Reina Victoria spa, constructed in the early twentieth century in tribute to Victoria Eugenie of Battenberg, consort of King Alfonso XIII.

This establishment attracted the crème de la crème of Spanish society who came to enjoy the benefits of what is today known as thalassotherapy (sea water used in health treatments). The iconic spa has now disappeared and today the modern Hotel Playa Victoria stands on the same site.

Curiously, the beach wasn’t actually named after Queen Victoria, but rather a wine merchant’s shop known locally as La Victoria that used to exist in the area. The neighbourhood wasn’t even half as developed as it is today and began to be popularly known by the name of the shop, so the nearby beach did too.

What to do on La Victoria beach

Obviously, the best thing you can do on La Victoria beach is enjoy swimming in the sea. But you can also have fun in the sunshine and take part in the many sports activities that are possible on such a wide beach. In fact, it’s totally normal to see (and get involved in) improvised football, beach paddle ball and beach volleyball games that spring up on the sand.

Thanks to its length, La Victoria beach is a great place to go running or take a long stroll. You can also go for a bike ride along the seafront promenade.

It’s a good idea to do these activities in the afternoon, because admiring the sunset from the beach with the Campo del Sur and the Cathedral in the background is a truly unforgettable experience.

La Victoria beach is also a lively showcase for the latest trends and a great place to enjoy local dishes in its nearby beach bars and restaurants. There are also several bars and clubs where you can have fun at night and party on until dawn.

Below are some of the restaurants and bars located right on the beach and also on the seafront promenade located above it (Avenida Amílcar Barca):

You can’t talk about La Victoria beach without mentioning its extension: Cortadura beach. In fact, there is nothing separating these two beaches at low tide except for a small walled protrusion.

However, unlike La Victoria which has been fully developed for tourism, Cortadura beach is virtually unspoilt. The only section with facilities is at the very start, closest to Cádiz city, where you will find toilets, showers and changing rooms.

From there onwards the beach runs on for almost four kilometres, and then continues for a further 2,700 m along Torregorda/El Chato beach on the isthmus that joins Cádiz to the Iberian Peninsula by the town of San Fernando.

La Cortadura beach is separated from the road and railway line that joins Cádiz to San Fernando by a line of sand dunes meaning you can enjoy a truly natural experience. In fact, one of the more remote areas is often visited by naturists. 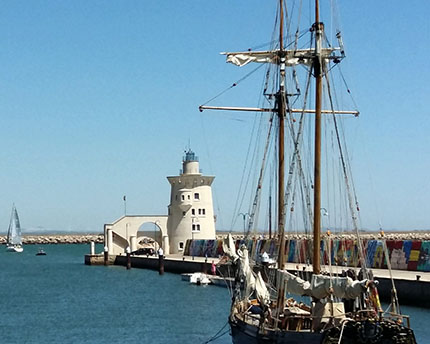 A boat trip from Cádiz: between the Atlantic and the Mediterranean 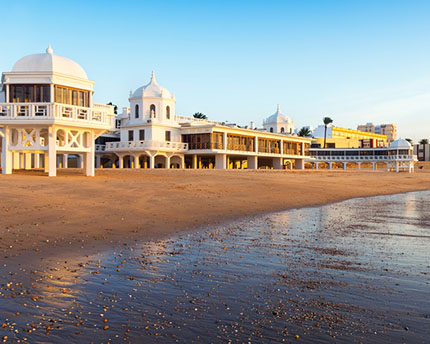 La Caleta beach, Cádiz’s most traditional and lively side