The Museum of the Cádiz Parliament, a piece of our history 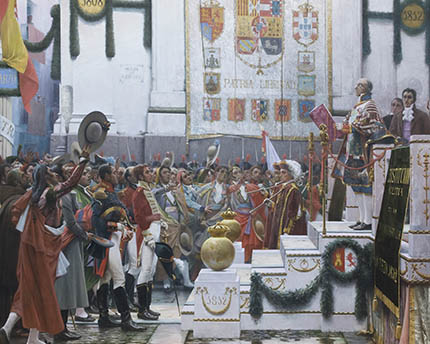 You have probably heard of the expression ‘¡Viva La Pepa!’ [Long live La Pepa!], and you may also be familiar with the origin of these traditional Spanish words. They can be traced back to 19 March 1812, which happens to be the day of San José (in Spain, men who are called José are nicknamed Pepe, hence the Constitution was popularly known as La Pepa). ‘¡Viva La Pepa!’ was the cry with which the liberals adhered to the Constitution of Cádiz, the nation’s first magna carta, affectionately known as La Pepa. Although it only remained in place two years, it marked a milestone in Spain’s history since it was one of the most liberal of its time and affirmed national sovereignty, placing power in the hands of Spanish people. This democratic precedent played a key role in the Spanish nation.

Cádiz witnessed this event because the Constitution of 1812 was signed here. For this reason, the city has a museum honouring the Cádiz Parliament, which was founded in 1912 to commemorate the centennial of Spain’s first Constitution.

A tribute to the Cádiz Parliament

The museum, whose full name is the Museo Iconográfico e Histórico de las Cortes y Sitio de Cádiz [Iconographic and Historical Museum of the Parliament and Siege of Cadiz], consists of three floors. Countless objects are on display from the eighteenth and nineteenth centuries, linked to the invasion of Napoleon’s troops between 1810 and 1812, and of course to the promulgation of the aforementioned Constitution. The extensive and interesting collection includes various pieces, weapons, constitutional documents, medals, flags, etc., that invite visitors to travel back in time to the Cádiz of two centuries ago. This educational museum is a must-see for anyone interested in learning about an extraordinary moment in the history of Cádiz and Spain.

The magnificent building that houses the Museum of the Cádiz Parliament was created by Juan Cabrera Latorre, the architect who designed the Neoclassical-inspired façade, with a row of balconies in the centre. Wrought iron architecture is used inside and for the imperial staircase that links the two main rooms.

An eighteenth-century model of Cádiz 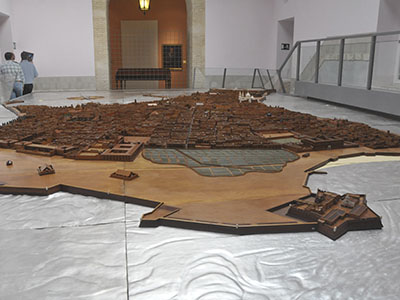 Model – Room of the Model of Cádiz, Museum of the Cortes of Cádiz

The first floor houses one of the museum’s most valuable items: a 1:250 scale model of the city of Cádiz made in the late eighteenth century. It was built in 1777 by several craftsmen under the leadership of the military engineer Alfonso Jiménez and commissioned by Charles III of Spain. Fine woods (mahogany, cedar and ebony) and precious materials such as silver and ivory were used.  Its large size is quite striking, and the many small details along the buildings provide a glimpse into Cádiz’s history and urban planning of that era.

The second floor of the Museum of the Cádiz Parliament features a walkway that offers visitors a bird’s-eye view of the scale model in all its splendour. The third floor is home to maps, plans, clothing from that era, weapons, shields and countless documents of great historical value.

A painting honouring the 100-year anniversary of the Cádiz Parliament

Among the many treasures, one that stands out is a painting commissioned to a local artist, Salvador Viniegra, to commemorate the centennial of ‘La Pepa’. The piece is titled ‘Promulgación de la Constitución de 1812’ and it depicts the first public reading of the constitutional text on 12 March 1812. An interesting aspect is that everyone in the painting conveys great joy and happiness as they wave their hands and hats in the air, and that all social classes are represented, from members of parliament to the general population.

This work of art and ‘El juramento de las Cortes de Cádiz’ by José Casado de Alisal, on display in the Congress of Deputies in Madrid, are the only two paintings that depict this monumental event that forever changed Spain’s history. The latter piece shows the moment when the members of parliament who wrote the text for the Constitution—which would be promulgated two years later—swear an oath of loyalty in the Church of San Pedro and San Pablo on 24 September 1810 in San Fernando (Cádiz). The event takes place during the Peninsular War against Napoleon’s troops. 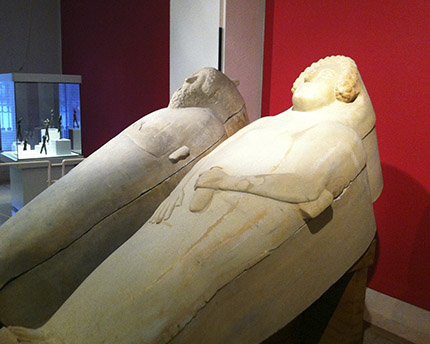