Flamenco is the ultimate artistic expression of Andalusia. It has always been viewed as the people’s art, and acclaimed writers from the Generation of ’27, such as García Lorca and Manuel de Falla, were proud fans of this dance.

The Sacromonte quarter is one of the main cradles of flamenco in Andalusia. Housed in the Albaicín district, its surroundings are rather characteristic: mountains, rivers and a meadow. This was the perfect spot for early gypsy settlements, along the slopes of Cerro de San Miguel and on the edge of Camino del Sacromonte, and they coexisted with the Arabs and Jews that already lived there. Here, they built new types of homes: caves, which have now been converted into tablaos for flamenco shows.

Sacromonte was historically a gypsy neighbourhood but it is now inhabited by people of all races and backgrounds, although the gypsy heritage is clear. It has gained popularity in recent decades, and many Spaniards and foreigners have decided to reside here or purchase a Sacromonte cave dwelling as a second home.

This quarter also houses the Sacromonte Cave Museum, which helps visitors gain a deeper understanding of gypsy history and the origin of the caves during that era. The tour through ten caves offers a glimpse into the lifestyle and traditional occupations of residents, and above all, into the passion and history of flamenco in the region.

If we travel back to its origins, flamenco is a combination of many cultures: Arab, Jewish and that of the gypsies who reached Andalusia in the 15th century. Flamenco, an art that lives on and can be enjoyed throughout Spain, emerged in this land where many different types of people coexisted. Flamenco performances are made up of three elements: the song, the beat and the dance. Jondo is the word that defines flamenco singing, which is done with a lot of feeling and from deep within, desde lo más hondo (‘jondo’). The dance is the star of the performance and tends to be improvised, thereby requiring years of practice. Lastly, the beat is when a master tocaor sits with legs crossed and plays a melody on the guitar.

Flamenco goes hand in hand with Zambra, the party that accompanies the song and dance regularly seen at gypsy weddings. It dates back to the nuptial rituals of the Moors who lived in the city during the 16th century.

In 2010, flamenco was added to the UNESCO Representative List of the Intangible Cultural Heritage of Humanity. It is a symbol of Andalusia’s identity that represents the region artistically throughout the world and has since gained institutional support to help preserve this culture and its traditions.

Where to see flamenco in Sacromonte

As you make your way up Camino del Sacromonte, you will come across the most emblematic spots in the district for flamenco shows.

This authentic gypsy Zambra establishment is the epitome of purity and feeling. The performers include local flamenco specialists who touch every aspect of this art.

As you watch the show, you can also feast on the city’s traditional cuisine, such as gazpacho, Iberian cured meats and more.

Managed by the Maya family, Cueva La Rocío is one of the most renowned in the art of flamenco, and performances here are known for their warm and welcoming nature.

The shows at this cave consist of three parts: a gypsy ‘wedding’, a more aesthetic piece with stronger beats and a rumba in which the audience participates.

Visitors may also dine as they watch the show or in the traditional Andalusian restaurant.

This establishment is named after the dancer and singer María Cortés, also known as María la Canastera. María resided in the cave with her children and the living room was the venue for flamenco shows when tourists visited the area.

The cave has maintained its essence and continues to feature performances with traditional gypsy wedding songs and dances, which audience members can enjoy as they sip on a glass of wine.

There is also a restaurant that serves fusion cuisine for dinner after the show. 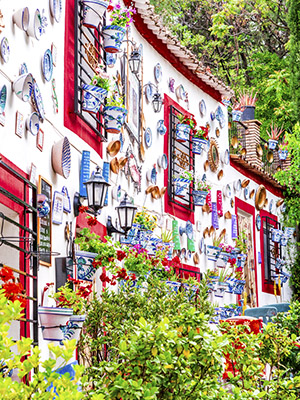 Venta El Gallo is the perfect place to enjoy the most traditional flavours paired with a flamenco show in a tablao. An unforgettable evening is guaranteed thanks to the idyllic location facing the Alhambra.

It also has beginner flamenco lessons with a dance instructor and guitarist.  This is the perfect plan to begin your flamenco immersion in Sacromonte.

Discover the origin and passion of flamenco at this spot in Sacromonte. The shows at this ancient cave feature an excellent line-up.

Each ticket includes one drink and visitors may choose to dine at the restaurant before or after the performance.

Sacromonte is the home of flamenco in Granada, so now that you know of its history and alternatives, are you in the mood for a show?

The art of flamenco has close ties with the city, so to truly become immersed in the culture, be sure to see a flamenco show in Sacromonte. 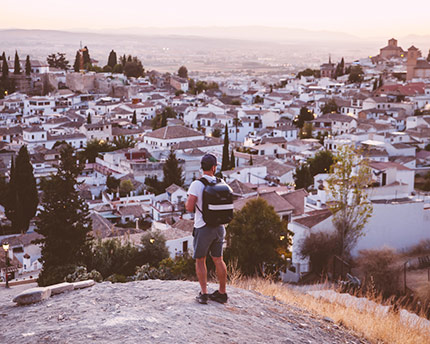